Overseas tourism spending jumps 20% in the last year, as the total tourism spend in New Zealand hits a whopping $35 billion

Overseas tourism spending jumps 20% in the last year, as the total tourism spend in New Zealand hits a whopping $35 billion 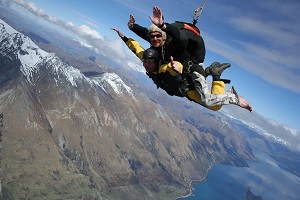 Spending by overseas tourists jumped 20% to a record $14.5 billion in the year to March 2016, says Statistics New Zealand.

Its Tourism Satellite Account: 2016 shows this leap follows a 17% increase the previous year.

As for domestic tourism, spending increased by 7% to $20.2 billion.

“The increase in domestic spending was particularly strong in the retail, passenger transport, and hospitality sectors,” Griffiths says.

Stats NZ says tourism generated a direct contribution to gross domestic product (GDP) of $12.9 billion, which is equivalent to 5.6% of GDP.

The indirect value of industries supporting tourism generated an additional $9.8 billion – 4.3% of GDP.

Stats NZ says 188,136, or nearly 8% of all employed people in New Zealand, worked in the tourism sector in the last year.

Here is a selection of noteworthy graphs from the Tourism Satellite Account: 2016.

This one shows the rapid growth of New Zealand’s international tourism sector:

This graph shows the value of international tourism in relation to some of New Zealand’s other exports:

This graph shows where tourists are coming from:

This graph shows how tourists are spending their money:

I have a very profitable Motel lease for sale in Timaru, if interested email me on y.trussel@gmail.com

Due to extremely low decile incomes Taupo medical practices charge registered patients $17.50 per consultation. The supposed wealth created by tourism is not sticking to the inhabitants of this apparently attractive destination.

Head over to Elizabeth st. Probably still get a house there for 200k. You will see why. Or head out to Mango, doc there is $17. Take a tour up any of the streets. Tourism doesnt pay much alrighty.

Nah mate, I heard it will all trickle down... any time now.

Pretty sure Taupo would just be another Whanganui or Napier if it wasn't for tourism. There is not a lot else going on there that brings in much money.

Point taken. A minimum pay job is still a job.

The tourism business owners reap the rewards but for employees it's an incredibly low wage industry. I'm not sure it can be any other way given so many jobs are low skilled. In fact, I heard National were talking about lowering the minimum wage for tourism jobs. You know - good for the economy and all that. More profit for the bosses! As Tim says it'll trickle down *starts belly laughing*.

Looks like the Aussie dollar doesn't buy what it used to, so they are heading over here.

I think it is just wunnerful that all these folks are coming here in solar, wind and electric powered planes and ships, driving round in EV's and just a'looking around. Totally sustainable...../sarc>

You are right are behind the curve on alternative power transport. In Auckland and Wellington we should be focused on the EV/Hydrogen networks that are being built in Europe and the US.
Great advances have been made in the last 5 years.

I was in Queenstown last Christmas and didn't actually see one NZer working in the industry, they were all young and foreign. Not only that, some of them I got chatting to were working for room and board only.

Air NZ need some credit here. They have been focusing on bringing higher value tourists to NZ and that appears to be showing through.
People don't talk about it but our tourism infrastructure is creaking under the boom and need serious investment to accommodate the increased numbers.

...and that's why Guardian readership is in the toilet. The current UN poll ranks action on climate change dead last.

I know you really don't care but
http://www.stuff.co.nz/world/africa/85812646/wildlife-populations-plunge...

I wish I could be as caring as a climate change zealot. Action against climate change is meaningless virtue signalling with with a $1.5 trillion per annum price tag. "Wind farms are devastating populations of rare birds and bats across the world, driving some to the point of extinction. Most environmentalists just don’t want to know. Because they’re so desperate to believe in renewable energy, they’re in a state of denial. But the evidence suggests that, this century at least, renewables pose a far greater threat to wildlife than climate change.

I’m a lecturer in biological and human sciences at Oxford university. I trained as a zoologist, I’ve worked as an environmental consultant — conducting impact assessments on projects like the Folkestone-to-London rail link — and I now teach ecology and conservation. Though I started out neutral on renewable energy, I’ve since seen the havoc wreaked on wildlife by wind power, hydro power, biofuels and tidal barrages. The environmentalists who support such projects do so for ideological reasons. What few of them have in their heads, though, is the consolation of science."

It is ALL involved, but the driver for all of it is human population. You appear to support the continuing use of non-renewables. Has is ever occurred to you they are called NON-renewables for a reason??