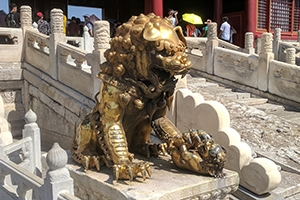 SHANGHAI – China has achieved some four decades of rapid economic growth. But one powerful source of growth has yet to be fully tapped: urbanisation. Now, the potential of megacities as an engine of dynamism and increased prosperity is finally getting the high-level attention it deserves.

Over the last decade, China has been working to shift from a manufacturing-led growth model fuelled by low-cost labour to an innovation-led, higher-value-added model underpinned by strong productivity gains. Urbanisation will be critical to facilitate this shift, not least by enabling economies of scale.

Currently, though China is the world’s most populous country and its second-largest economy, only half the population lives in urbanised areas, and less than 10% reside permanently in megacities. And the country’s urbanisation rate remains well below the global average.

In the 1990s, the small city of Kunshan became China’s leading centre for manufacturing electronic products. By integrating themselves into global supply chains, small cities in Guangdong province – including Dongguan, Huizhou, Shunde, and Zhongshan – have played a critical role in establishing China as the “Factory of the World.”

But while the success of smaller cities is to be celebrated, it is China’s megacities where the greatest potential to fuel future progress in productivity – and thus GDP growth – is to be found. So far, China has just four “first-tier” cities (with populations exceeding 20 million): Beijing, Shanghai, Guangzhou, and Shenzhen.

Given the size of China’s population and economy, that is not a lot. And, in fact, there is no reason to believe that these megacities have reached their capacity, in terms of population or contribution to economic growth. Moreover, China has many dynamic second-tier cities – such as Chengdu, Tianjin, Hangzhou, Wuhan, and Suzhou – that are capable of reaching first-tier status, if given the chance.

In order to maximise the potential of China’s cities, the government will need to be much more adaptive and flexible, especially regarding its notoriously strict control of urban land-development ratios. In particular, China must abandon its land-quota system, which not only limits the amount of land cities can develop for future productivity growth, but also allocates a disproportionate share of land to factories. Otherwise, urbanisation will continue pushing up already-high housing costs, but not efficiently enough to power sustained growth and development.

The good news is that local governments are already working with the central government to alleviate or even eliminate existing administrative constraints. In China, cities’ administratively defined boundaries include both urban and rural jurisdictions, with the latter – called the “county” – engaged mainly in agriculture. For example, about half of Shanghai’s administrative jurisdiction of 6,340 square kilometres (2,448 square miles) is rural.

Another strategy for advancing China’s transition toward a city-led growth model is to expand the role played by urban clusters that leverage the strength of first-tier cities to boost growth in less-developed areas. From an economic standpoint, the Yangtze and Pearl River Deltas – which encompass megacities like Guangzhou, Shanghai, and Shenzhen – are undoubtedly the most important such urban agglomerations, set to generate the higher future productivity gains from economies of scale and complementarity.

Here, too, China’s leadership has already caught on. This past March, Chinese Premier Li Keqiang announced a plan for the development of a city cluster in the Guangdong-Hong Kong-Macau Greater Bay Area, which covers nine cities, including Guangzhou and Shenzhen, as well as the special administration regions of Hong Kong and Macau.

From 2010 to 2016, the annual GDP of the Greater Bay Area soared from CN¥5.42 trillion ($82 billion) to CN¥9.35 trillion ($1.42 trillion), making it the world’s third-largest urban economy, after Tokyo and New York. Yet the population of the Guangdong-Hong Kong-Macau Greater Bay Area is growing fast, and its GDP per capita is less than half that of Tokyo, suggesting that its potential is nowhere near depleted.

Moreover, China’s leaders seem to be eyeing a second greater bay area, centred on Hangzhou Bay, which, because it overlaps with the Yangtze River Delta, could go a long way toward integrating that already-prosperous region. Such a cluster could cover the coastal megacity of Shanghai, as well as about ten more important cities across the Zhejiang and Jiangsu provinces. It would include world-class ports, such as the Port of Ningbo-Zhoushan (the world’s busiest in terms of cargo tonnage). And it would cover two of China’s 11 existing free-trade zones. The result would be a bay area on the scale of San Francisco and Tokyo.

The pace of China’s economic growth over the last four decades has been unprecedented. But China has yet to complete its rise to rich-country status. As it upgrades its economy to become more knowledge-based and technology-driven, it is again leveraging its strengths. There is no better example of this than the ongoing effort to tap the potential of megacities.

Zhang Jun is Professor of Economics and Director of the China Center for Economic Studies at Fudan University.  Copyright: Project Syndicate, 2017, published here with permission.

Ha ha, that's what I was about to post!

Just so there is no confusion, image replaced. Took it myself today in Forbidden City.

It is worth remembering that the so called mega cities are still experimental, even cities over one million are a relatively recent phenomena. They operate under extreme levels of interdependent complexity; high fragility masquerading as strength.
It is also worth remembering that the appalling George Soros is behind Project Syndicate and supports the destruction of Western Europe through their suicidal immigration policy. Nothing they say should be taken at face value.

Just why is Soros "appalling' and what is your problem with Project Syndicate? What evidence do you have for your(rather intemperate) assertion that he supports the destruction of Western Europe through suicidal immigration? would you similarly accuse Merkel of the same thing?

Perhaps he is appallingly short?

He is certainly appallingly rich.

Yes a bit intemperate but by his actions we see his agenda. He is actively working to alter public opinion towards his extreme globalist agenda through his myriad propaganda outfits (including Project Syndicate). He intends the destruction of the nation state by undermining its social cohesion and cultural and religious traditions. He is also funding extremist paramilitary terrorist organisations such as Antifa. Through his influence in the EU Soros is actively trying to undermine the decision by Eastern European states (no doubt their history with the Ottoman Empire giving them some steel in their spine in that regard) to refuse Muslim and Sub Saharan African immigration. He is also funding NGO's to collect African immigrants ( almost entirely single young men) from close inshore Libya and delivering them directly into Southern Europe. The man is highly dangerous, not sure what we have done to deserve to have one of his underlings peddling his stuff here though.
http://www.zerohedge.com/news/2017-02-09/ngo-fleet-bussing-migrants-eu-…

"He is also funding extremist terrorist organisations such as Antifa" That's a serious accusation and you really need to back it up with hard evidence,otherwise it will sound like personal animus.
Again,what is your evidence that Project Syndicate is a propaganda outfit?

""The pace of China’s economic growth over the last four decades has been unprecedented"" very impressive true but I remember reading somewhere that the last time any country managed such spectacular growth (>10%pa) for decade after decade was 150 years ago in New Zealand.

Most NZ economists will expect the Chinese economy to collapse next year.

Yes I remember the economists predicting disaster when growth dropped below 10%. Compound growth means 2% growth in China today is more activity and more wealth than when it over 10% a couple of decades ago. China probably can survive a severe recession - not sure if NZ or Oz or even USA will survive a major recession in China.

Richard Heinberg is worth a revisit.
http://richardheinberg.com/