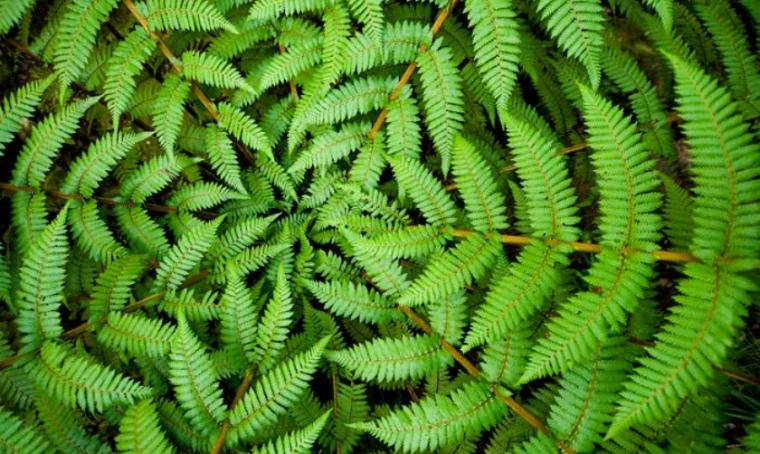 This is the second part of Deloitte Access Economic's "Regions of Growth" series. It is here with permission.

What role should regions play in supporting overall economic success? How can our regions build a pathway to prosperity, and what role do exports play in this picture?

To address these questions, our analysis focuses on:

• The industries that would provide New Zealand with the best chance to successfully turn local advantage into global competitiveness (industries of opportunity).

• The economic impact of increasing exports, within each industry of opportunity, on our regions and the New Zealand economy as a whole (economic impact).

This report focuses on four of New Zealand’s five industries of opportunity:6


These are the industries identified in Shaping our slice of heaven: Industries of opportunity, as having both above average global economic growth over the next 20 years, as well as industries in which New Zealand has a strong comparative advantage on the global stage. Our prosperity map outlines where these sit relative to other industries, as seen in Figure 3.

However, based on these selected industries, we wanted to know how our regions of focus could benefit from increased export growth. To do so, we measured the economic impact of scenarios in which each industry of opportunity’s exports grow at the highgrowth profile necessary to reach certain industry or government targets.

We used our in-house regional general equilibrium model (DAE-RGEM) to estimate the economic impact of growing exports in our industries of opportunity. The model simulates how the economy will respond and adjust to increased export growth over the period of 2019 to 2040. We assume that this growth stems from change within New Zealand, in particular from an increase in productivity in each relevant industry, rather than from an increase in demand from international markets. Since productivity improvements do not differentiate between production for domestic consumption and export, these improvements benefit the entire industry’s production regardless of the final consumer.

Based on the assumed increase in exports, DAE-RGEM models the behavioural response of consumers, firms, governments and overseas markets. At the same time, it observes resource constraints and takes into account the optimal distribution of resources. The model has the ability to incorporate the flow-on impacts to any region of New Zealand and the rest of the world. 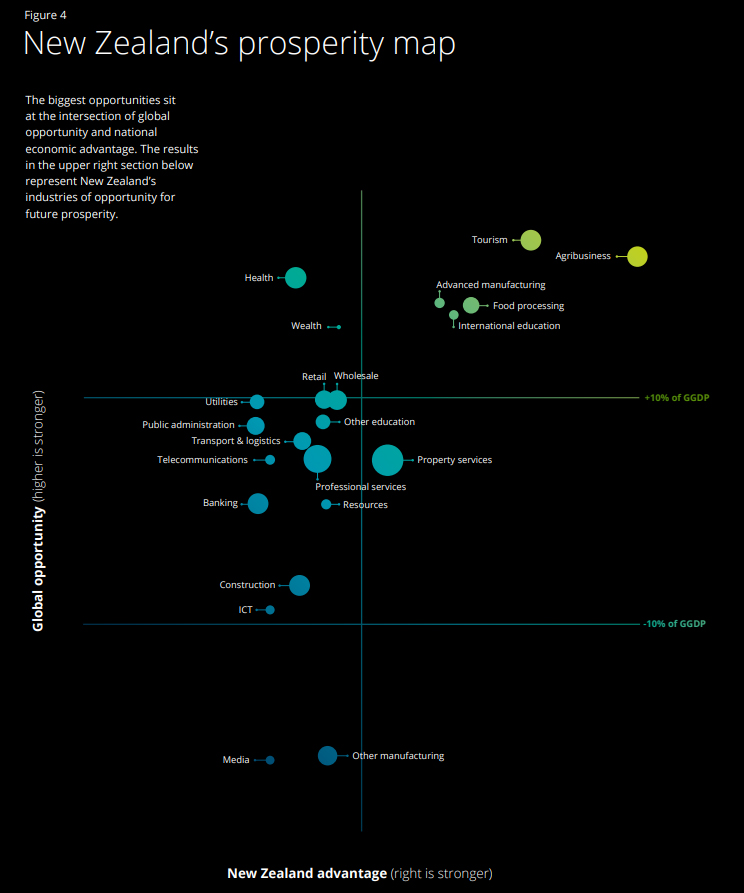 This provides a ‘what if’ style analysis, based on a hypothetical scenario where the five focus regions achieve the export growth necessary to reach national targets. Appendix B details our approach, our in-house DAE-RGEM tool, and the inputs used in the model.

To determine the economic impact of the increased export growth, we compare the national and regional economies under two distinct scenarios:

• The ‘base case’ scenario grows exports at the same rate as the average annual growth rate over the past ten years for each industry.

• The ‘counterfactual’ scenario grows exports at a higher rate than the base-case scenario.

We have used the growth rate required to achieve national export targets set for each industry of opportunity.7 This creates a ‘high-growth profile’. We modelled four independent ‘counterfactual’ scenarios – one for each industry of opportunity. In each ‘counterfactual’ scenario, high-growth profiles are applied to our focus regions.8 We recognise that how each region responds to export growth will differ due to differences in, for example, access to capital and resources, available products and services, level of competition, and employment opportunities.

However, our focus regions follow a higher-growth path, while all other regions grow at their ‘base case’ growth rates.

Appendix A outlines our methodology to create export growth profiles for both scenarios.

Export targets are what our country aspires to in order to maximise prosperity. They are set to help government achieve their priorities and hold industry leaders accountable. We used the following export targets to inform our ‘counterfactual’ scenario for each industry of opportunity:

• Agribusiness: In 2014, the Primary Industries Minister announced an ambitious goal to double the value of primary sector exports from its 2012 level to $64 billion by 2025.10 This would require an annual growth rate of 6.2 percent from now until 2025 for agribusiness. With current exports in agribusiness not keeping up with the growth required, we think this target is a stretch. However, the agribusinesses industry is looking positive over the long-term, and we expect the industry to respond to the key challenges it faces to continue to be prosperous.

Our analysis reveals that the economy would enjoy considerable benefits as a direct result of increasing exports in our industries of opportunity from our regions of focus. Specifically, we estimate that:16

Over the period 2019 to 2040, the economy would be 4.3 percent larger in real terms if our regions of focus grow at the national export growth target set for tourism. This is a gain of approximately $11.5 billion in 2018 dollars. Similarly, when compared to the ‘base case’ scenario, there is a boost in employment of an additional 23,100 full-time equivalent (FTE) jobs by 2040.

The additional national GDP, as a result of our regions of focus growing at the national export growth target for agribusiness, equals approximately $4 billion over 2019 to 2040, relative to the ‘base case’ scenario.17 There would also be 6,500 FTE additional jobs created by 2040.

If our regions of focus grew at national export growth targets for food processing between 2019 and 2040, there would be an increase of approximately $10.6 billion in national GDP. This also has the potential to increase employment by around 23,200 FTE jobs by 2040.

Achieving the national R&D target, and as a result our regions of focus growing advanced manufacturing exports, would add an additional 39,500 FTE jobs by 2040. This also has the potential to increase the size the economy by $6.1 billion over the period 2019 to 2040, when compared to the ‘base case’ scenario.

As sectors are interrelated and affected by changes in other industries, related industries also benefit from an increase in exports (and therefore increased production) by our industries of opportunity. For example, the economic impact of the agribusiness ‘counterfactual’ scenario is $4.0 billion to New Zealand over the period 2019 to 2040. This does not mean that the GDP growth is limited to the agribusiness industry, but rather the economic benefit is spread across a number of industries.

$1.9 billion in GDP growth out of the total $4.0 billion economic benefit comes through GDP growth within agribusiness, $1.3 billion comes through growth in ‘other business services’ and a further $500 million from both ‘trade’ and ‘other government services’.18 This explains why we will observe in the following sections of the report that regions that are not relatively strong in an industry of opportunity may still see considerable GDP growth occurring from exports in that particular industry.

Economic shocks rarely occur in isolation, therefore the modelling should be interpreted as an indication of the potential magnitude of the impact of increasing exports in each industry and each region, but not as a prediction of the future.

Which of the industries are likely to provide the largest benefit to each region from strong export growth?

The estimated economic impact varies significantly across our focus regions. This variability is driven by differences in the relative size of the industry, the economic composition within the region and the extent to which each region is export-driven.

The next five chapters (which will follow in separate postings) provide a detailed narrative on each region, discussing:

• An overview of the current economic conditions. The economic impact results, in terms of regional GDP and employment for each industry of opportunity.

• A consideration of how the region could amplify the economic opportunity identified in our economic impact results.

This is the second section of Deloitte's report: "Shaping our slice of heaven: Regions of opportunity". The full report is here. This article is reproduced with permission.

Er, but what about profitability and the higher pay this allows? Increased sales are not an end in themselves. I suspect Tourism is subsidised by shareholder dilution. An example is it now takes me 20 minutes to get to the beach in summer, 5 minutes in winter. Tourism provides entry level low skilled jobs, so good for soaking up unemployment, but very vulnerable to the price of oil.

Advanced manufacturing sounds much more exciting as it suggests profitability and high pay. Profitability and high pay is good for everyone. It encourages capital investment and upskilling of the whole society, as each industry poaches workers from the less profitable industries in the region and trains them up and people study independently to get the skills too.

Of course, changing the country's business model from one based on 2% inflation, housing speculation and immigration and government dependency, to one based on productivity, profitably, 0% inflation and rising wages will be violently resisted by everyone, as we are all conditioned to the current set up.

How many jobs in tourism go to immigrants and how many to unemployed Kiwis? Paul Spoonley said he cycled the Alps to Ocean and never met a Kiwi workng in tourism. Is it mainly a business by foreigners for foreigners but in our back yard?

Tourism to grow at 5.4%? So 40% increase by 2024. That may be feasible but to then suggest the same increase until 2040 means a growth of 224% over current figures. Many of our tourist highlights are already overcrowded. OK lets invent a few new ones but what about the Carbon Emission cost of all those extra international flights?