AMI's financial strength rating slashed to A- from A+ after quake; AM Best says AMI still on negative outlook as capital raising plans unclear

Insurance
AMI's financial strength rating slashed to A- from A+ after quake; AM Best says AMI still on negative outlook as capital raising plans unclear 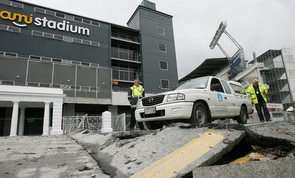 <p> AMI Stadium in Christchurch was badly damaged in the February 22 earthquake.</p>

Insurance credit rating agency A.M. Best Co. has downgraded the financial strength rating of Christchurch-based mutual AMI Insurance Ltd by two notches from A+ to A- after the February 22 earthquake.

It also downgraded AMI Insurance's issuer credit rating to A- from AA-.

A.M. Best said it was keeping the rating on negative outlook while AMI was still discussing plans to raise capital.

"The downgrades reflect A.M. Best’s view of the negative impact on AMI’s capitalization, due to the latest loss development from the recent Canterbury earthquake in February 2011," it said in release.

"In addition, A.M. Best is concerned with AMI’s risk management in relation to its aggregate catastrophe exposures," it said.

"A.M. Best understands that capital raising initiatives are being pursued by AMI’s management; therefore, A.M. Best has put the ratings under review with negative implications while discussions continue with management regarding back-up capital plans."

AMI's chief executive John Balmforth told interest.co.nz Friday that AMI was "not in a position to share its thinking as it was commercially sensistive."

"There are a number of options open to us each of which need careful consideration."

"We will be talking with the company on a regular basis and monitoring the situation."

Ng said AMI's status would be subject to a review for about a one month period pending an action plan to deal with a potentially crippling cash shortfall caused by a second wave of earthquake related claims.

The company, with 30% market dominance in residential insurance in Christchurch, was hit with 12,000 claims from the Sept.4 earthquake alone.

Following the latest quake, Balmforth reiterated the firm's position that it was able to withstands the financial impacts.

Interest.co.nz reported on March 11 that AMI Insurance had NZ$1.1 billion of assets and reinsurance, but faced potential earthquake claims of around NZ$1 billion.

Finance Minister Bill English, asked whether Government was worried about the downgrade said AMI would be under the supervision of the Reserve Bank.

"They'll [the Reserve Bank] deal with any concerns that there are there."

"We consider the insurance sector is sound," he said.

"We are monitoring this situation closely."

If AMI truly insure 30% of the ChCh domestic dwelling market then this downgrade is an underestimate.

Bernard, please find out the total value of dwellings or the total number of dwelling replacement policies AMI hold in ChCh.

The issue has been avoided by the media but way more than 10,000 need rebuilt.  As I mentioned before, 17 out of 25 of ours need rebuilt.

I think that as many as 30,000 houses would need totally rebuilt which would leave AMI pretty much bust.

On an aside, a section in Avonside (Dallington really) was auctioned today.  House had been demolished section was covered by EQC land claim transferred with sale so land would be fixed eventually.  Pre earthquake GV was $129,000 for land and that probably reflects a fair market value (2007 market price would've been $150,000ish).  Remember that the land damage was insured by EQC, however it sold with just one bid and about 4 onlookers/buyers at auction at just $30,000.  I was there but not interested as who knows when the land will if ever be made buildable, or just what sort of compensation is given if EQC decide to abandon the land.  It could however turn out to be a great investment if anything ever does get sorted.

FYI updated with comments from AMI CEO, Bill English and RBNZ, who is watching the situation closely.

My speculation is that the RBNZ is now trying to organise a white knight bidder to rescue AMI.

I also hear from inside the industry that the white knights are lining up.

"We consider the insurance sector is sound," he said."

Successive Finance Ministers and RB Governors seem to trot this out whenever concern is expressed about the status of the financial system.

We know it's cobblers but it's their way of saying "go away, we're in control".

At some point there will be some serious scrutiny of insurance companies, here and overseas and their ability to weather claims.

Crikey I swear a black swan just flew past my window!

Who would touch it until they know what they have exposed themselves to.  It could be months or years before these figures are known are current processing rates.

Best case scenario is to sell their non-Christchurch customer book to someone now and hand the rest (including all proceeds of the sale and all existing assets) to the Government to sort out the mess they've made.  Thank goodness there are no shareholders to consider!

Was it legal for them to write as much insurance as they did and only take such a small amount of reinsurance?

Questions need to be asked.

The only hope that they have for survival is that EQC make two $115k payouts on every policy they have written (hence limiting their liabilty).  However if the full $115k was paid out first time it was probably a write off and the private insurer fully liable for the extra (even if they hadn't paid out by Feb22).  And if the house wasn't wrecked first time round it probably only had $10-50k damage say and even with EQC paying $115k the second time round the private insurer will still be on the hook for a fairly large payment.  And then don't forget even way out in the north west a fair proportion of brick or block fences need rebuilt at an easy $5-15,000 each, plus drives etc.

If they do insure a third of greater ChCh homes, say 50,000, then they can't afford a payout of more than $22,000 per customer, so they had better hope that they didn't insure too many brick houses with concrete drives!

Can someone tell me, because of the way AMI is set up  i.e it's  policy holders own them (me) what sort of capital raising will they do? A big fat loan from the government as presume they cant sell shares in the company or anything like that?

AMI could ask for money from its shareholders, who are also its policy holders. But that's extremely unlikely given its customers (particularly the ones in Christchuch) are not wealthy.

It could sell part or all of itself to another listed general insurer, including perhaps IAG ( which owns State and NZI), Suncorp Metway (which owns Vero and 68% of AA Insurance), Tower and Lumley (owned by Wesfarmers).

It could sell part or all of itself to a bank.

Or it could be bought or bailed out by the government.

If there was any chance nothing was going to happen the government would have to take an interest.

AMI is New Zealand's largest locally owned general insurer. It had 822 staff at the end of December, 73 branches, 2 call centres and 22 agencies across New Zealand.

I haven't seen a measure of how many customers it had but it would have to be at least 500,000 given its strong market share in various areas.

All these comments about a potential "bailout" do not really make much sense to me, to be honest - or am I missing something ? Yes AMI has been downgraded to A-, but isn't this still a pretty reasonable rating ? Also, it is well known that AMI (like all other NZ local insurance companies) has extensive re-insurance, so all these calculations about the likely financial impact to AMI do not make any sense at all, unless they fully take into account the actual amount of re-insurance cover. Isn't this just another case of misguided scaremongering ?

All these comments about a potential "bailout" do not really make much sense to me, to be honest - or am I missing something ? Yes AMI has been downgraded to A-, but isn't this still a pretty reasonable rating ? Also, it is well known that AMI (like all other NZ local insurance companies) has extensive re-insurance, so all these calculations about the likely financial impact to AMI do not make any sense at all, unless they fully take into account the actual amount of re-insurance cover. Isn't this just another case of misguided scaremongering ?

To add to my comments above, see link below:

According to AM Best Co. credit rating agency, A- corresponds to: "Excellent abilities to meet ongoing insurance obligations". Hardly a rating for an insurer in need of a bailout (unless we do not trust this rating or we think that this rating will deteriorate substantially - but this would be a different discussion).