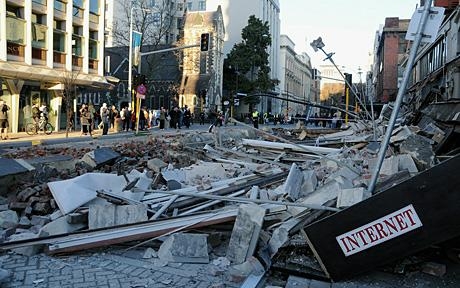 House insurance premiums charged by the country's third largest insurer are going up an average of 50% -- an extra NZ$200-$300 a year for householders-- a move that is expected to have a ripple effect on rates nation wide.

AA Insurance confirmed Tuesday premium hikes will take effect as early as next month or when policies begin to renew. Customer notices to that effect are in the mail.

Suzanne Wolton, head of corporate affairs, said the move was necessary to offset seismic reinsurance hikes triggered by the combined impacts of flooding in Australia, back to back earthquakes in Christchurch and also Japan.

Wolton said the premium increase would only apply to house insurance policies held by AA Insurance but would affect its customer base across the country.

"Despite what's happening in Canterbury, reinsurers look at New  Zealand as a whole and we all know New Zealand is a country where we are subject to earthquakes and volcanoes. Canterbury's been unlucky but the rest of New Zealand is the place that reinsurers are going to worry about.''

A spokesperson for IAG, the country's largest residential insurer by market share, said Tuesday it was too soon to tell whether its premiums would be going up.

However, an official with AMI confirmed it would also be raising premiums in line with AA Insurance.

"We see ourselves being in line with what's been announced. We're still refining it and will have a better idea of that by early June," said Hutton.

Hutton revealed that premium increases would not be restricted to house policies and would likely apply across the board and include increases on deductibles, the amount a customer is required to pay to collect the insurance.

"They'll be increasing across all product line but obviously some will be greater than others.''

Wolton said reinsurance increases were so high that it would be virtually impossible for insurers not to pass along those costs in the form of premium hikes.

"If your house insurance premiums aren't going up substantially you need to ask your insurer why. You don't want your insurer to be taking additional risk and reducing the size of their reinsurance programme or going with reinsurers who are less credit worthy in order to give you a lower premium because we've all seen what the result of that.''

Wolton's comment was in reference to AMI Insurance, whose hefty exposure to the residential insurance market in Christchurch (and inadequate reinsurance programme) forced the Government to put a NZ$500 million backstop to keep the mutual company afloat.

While average house premiums will be increasing 50%, Wolton said the range would be vast.

With contents and vehicle insurance premiums remaining unchanged at AA Insurance, Wolton suggested it was an ideal time for customers to shop around to make sure they were getting the most competitive rate possible, bearing in mind what they got for the policy in return.

"This is a good opportunity to challenge this notion that you need to keep all your insurance in one bundle with one provider. You need to shop around for specific insurance using different criteria.''

Insurance Council of New Zealand chief executive Chris Ryan cautioned customers concerned about premium increases not to cancel their insurance, emphasising the risk of going without.

"The worse thing you can do is not be insured in a high risk world. It's not just earthquakes, it's all risks."

Ryan admitted that rising insurance premiums, on top of expected EQC levy hikes, GST, a potential fire service levy, and a host of other consumer pressures, could make insurance a luxury many can no longer afford.

He said the upside of current market pressure was that it could stimulate competition.

"There's a lot of competition for good policies and good risks and the last thing insurers will want to do is price themselves out of the market.''

Ryan encouraged customers to shop around and also, if they were using a broker, to ask hard questions of them.

While insurance relief isn't on the horizon in the near future Ryan said it was possible premiums could settle in a few years time, as was the case following September 11, 2001.

"That was a huge loss and immediately after there was a strong increase in insurance and reinsurance but over the five to seven years they returned to long-term average on the basis of competition.''

Simply running out of money

..and under the current and upcoming worldwide scenario (Broom economies), who is going to insure  reinsurance companies such as Munich Re, Swiss Re,  Berkshire Hathaway Re, etc. ??

Costs will increase dramatically, because of damage worldwide caused by "Lack of Funds" (Economic inquality), the consequences related to "Climate Change" and possible increase of earthquakes also.

"It does seem likely that shakes as big as last night's can be expected in this zone for a while yet." Researchers from Canterbury University and the University of Calgary will soon begin underground seismic surveying of the gap between the two faults.   stuff

What odds now the much promised rebuilding in Chch cannot start....the land is not stable...new subdivisions will have to be established on stable land....how long will the bureaucracy wait before accepting this reality....

Or are we to be given a grandstand viewing of foolishness and poor judgement in the name of company profits.....remind me again about the 10 metre deep trenches with great walls to make the land stable....

Over many months I noticed when Oxford (OXZ) has a number of smaller deflections in a short sequence on the "drums" – four to ten hours later Christchurch has another aftershock of magnitude 4.0 plus.

The re building will be dragged out as long as possible, this way not such a big hit on the Balance Sheet if it is over a 10 - 15 year period.  Probem with insurance companies is they have only looked at collecting, investing all our premiums over all of these years, now they have to acutally pay out on the policy,  they are no way prepared or have the experience in house for this as their  training was geared in the complete opposite direction, of marketing, retaining and money collection.

Ten to fifteen years to rebuild and my once fine city will be just another regional town.