Carmel Fisher confronts the worst fears on the minds of investors and finds reason to stay calm, and carry on

Carmel Fisher confronts the worst fears on the minds of investors and finds reason to stay calm, and carry on 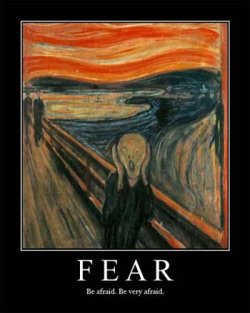 It's all in your head.

If this theory is right, we should be able to get over our fear of investment markets by visualising all the things that could go wrong. A list of the scariest things that can happen to the US economy, compiled by CNN Money after talking to 27 economists, is probably a good starting point.

Not surprisingly, a debt default by one of the troubled European countries such as Greece was cited as the number one worry. The reason a default would be scary is that it could trigger a 2008-like financial crisis. Thanks to the Greek parliamentary vote, we’ve not only been able to visualise this fear but actually strike it off the list, at least for the meantime.

The number two fear was another oil price shock, which would likely be triggered by political turmoil in the Middle East.  Rising oil and gas prices would raise costs for businesses and slow down consumer spending which is vital for an economic recovery. Many economists blame rising oil prices for the slowdown in economic growth last year that led to talk of a double-dip recession.

The next biggest fear was a possible US default, just like Greece, if Congress does not raise the debt ceiling (giving the government breathing space to pay down debt).

US debt default: "I don't think so"

Basically the US government is so indebted that come August, it won’t be able to pay its bond obligations. This means that if everybody who owns US government stock all arrived at the door of the Federal Reserve and said we’d like our money back, the government would come up short.

Of course this scenario is virtually impossible to imagine, and even the Republicans who are threatening to vote against the ceiling being lifted, know that it would be economic suicide.  Still, there is some brinkmanship going on and the market has been distracted by the debate, even though they know what the ultimate outcome will be.

Aside from these three main fears, the economists were not that concerned about other big issues on the list like a slowdown in China, budget cuts or another natural disaster.

This is pretty encouraging.  The fact that markets have faced and dealt with a range of big concerns over the past few years should give us confidence that they will deal with others as they arise. A prime example is the share market’s rally at the end of June, regaining most of the losses of the previous seven weeks, because investors  had confirmation that the Greek austerity vote would be passed. Everyone knew that Greece wouldn’t default, but still investors let fear get the better of them.

Having read what 27 economists fear the most, and visualised them, I don’t think the future is too scary.

Fear isn't a good adviser, but to stay calm and carry on neither.

Carmel says: Having read what 27 economists fear the most, and visualised them, I don’t think the future is too scary.

I think for many, comprehensive correlations between current events, which are directly related or influenced by the economy are worrisome. The consequences of climate change, politics and natural disasters dominate the world - even more in the future.

Carmel Fisher - have you heard/ read – probably not ?

Other causes of wasting trillions, money we don’t have. Economies are now so stressed to perform, leading into mistakes. Worldwide we are constantly cleaning up massive damages, costing time and trillions.

How much longer until we simply running out of money…….. or even worse ?

Carmel Fisher says - "Basically the US government is so indebted that come August, it won’t be able to pay its bond obligations. This means that if everybody who owns US government stock all arrived at the door of the Federal Reserve and said we’d like our money back, the government would come up short."

US Bonds are issued by the US Treasury, so why would you go to the Federal Reserve, a private institution that is not part of the US Governemt, to retrieve them?

Her whole investment thesis seems to be based on look what's happened in the past and project it forward.  As such she is acting like the Christmas turkey who is fed and well looked after for 364 days but on Christmas Eve suddenly gets its head chopped off.  I'm glad I don't have any money invested with her funds.

Actually, the US Federal Reserve system is part of the US government, with all senior leadership positions appointed by the President, and confirmed by their Senate.
http://federalreserve.gov/pubs/frseries/frseri.htm

Why not abolish money all together or throw all money or similar into a giant blender and then give every ordinary mortal half a spoon full ? Must be tasteless dangers ? I think Bernanke should try first - but don't go near him - he could become full of thin acid air - dangerously explosive.

Now that's more like it....facts,factoids..this can be evaluated and extrapolated for future reference to the bigger picture...well done, young parker..top of the class...better than all that crap you were wandering all over the other night about Instant Finance !!

Good grief! If anyone was looking for a reason not to invest in Fisher Funds this piece of one dimensional tat would provide ample evidence. If this is the quality of analysis being used by one of our 'top' fund managers then God help the NZ investment community.

It strikes me your perspective on current risk is too narrow...

This chap Jeremy Grantham (Chief Investment Strategist of Grantham Mayo Van Otterloo)... has a wider view that you may gain something from...

"the economists were not that concerned" mostly all the same bozos who missed the GFC coming...now seem "happy", prozac must be being given out by the bucketfull.  The ones that didnt miss it like Steve Keen are sayig it isnt over and the worst is yet to come....but are being ignored......again.....

For an alternative view on how bad things are,

So funny - he gets that the 'growth econonics' mantra has crashed, but hasn't the foggiest why. Good interview, though - she knows where it's going.  "Why did you think growth would go on forever?"  Best question from the NZ media this year.

What do you make of our new troll? He/she denies being Act; you reckon libertarian, brt-type think-tank, or solo?  The style says they've been spin-taught. Funny as a fight.

And no, I don't think Fisher gets very much. Pretty lightweight intellect is my guess - touts exponential growth as a great thing in $ terms, but seems to overlook the physical impossibility of sustaining it. Kind of like the way you wonder how all those folk, for centuries, watched ships go hull-down over the horizon, but kept thinking (?) the world was flat. Or the folk who watched sea-birds soaring (and falcons thermalling) with steady wings, yet jumped off towers flapping madly.

Those who taught economics so evangelically for the last generation or two have a lot to answer for - she genuinely believes that substitution and exponential growth go on forever. Either that or she's so committed that she has no way out.