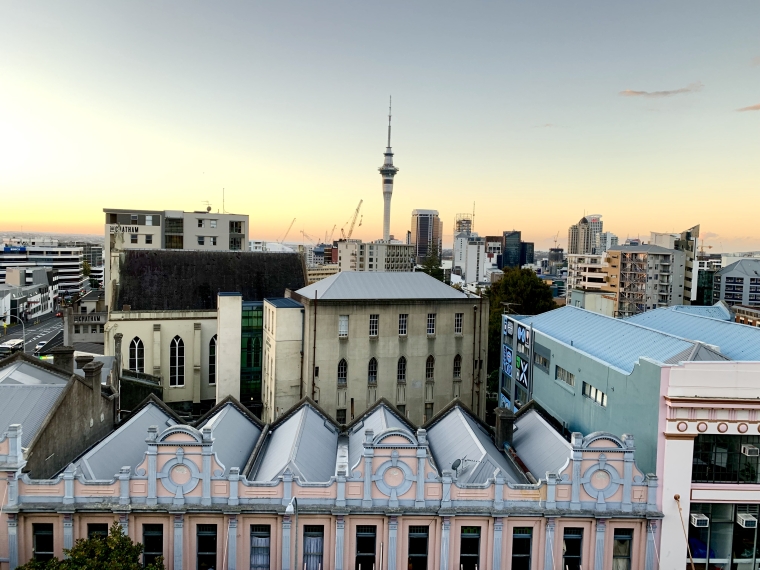 The Auckland Council is seeking the public’s feedback on its future vision for the city's Central Business District (CBD).

The council’s original City Centre Masterplan (CCMP) and Waterfront Plan were adopted in 2012, but it says it’s now time for an update.

It says the two plans will be combined and will provide a blueprint for future development in the central city and allow the council to look at opportunities for future growth.

An Auckland Council discussion document released as part of the public consultation process says the central city’s resident population has increased from 24,000 to over 55,000 since 2012, while the number of daily workers has jumped from 90,000 to more than 120,000.

“Every day over 200,000 people visit the city centre. An estimated 20 per cent of Auckland’s gross domestic product is now generated from the city centre alone.

“Auckland continues to grow at an unprecedented rate. Right now, there is $73 billion of commercial construction across the region and more than 150 major development projects either in progress or in the pipeline. We need to continue the transformation of the city centre so we can provide a cultural and economic heart for Auckland. This will help it become a great place to live, work and play. The City Centre Masterplan refresh provides the blueprint for this transformation.”

The report includes a number of key objectives, such as making the city centre more accessible through increased public transport and a target to reduce the number of cars entering the CBD during the morning peak period by at least 20%.

Central to such plans is the completion of the City Rail Link (CRL) which is expected to be finished in 2024. It will include two new underground railway stations and is expected to double rail city’s rail capacity, with an additional 12,000 people able to travel per hour.

The report says bus congestion, even with a new fleet of double-decker buses, remains an issue as the city’s roads simply cannot handle the volume of people trying to get into town and home during morning and evening peaks.

“This has led to the government proposing development of a light rail system transit linking the suburbs to the city centre and to the airport, in large part to relieve the pressure on the road network.

“Light rail transit between the city centre and Māngere (CC2M), along with a future rapid transit connection to the northwest, will together move many thousands of people per hour along a mostly pedestrianised Queen Street. CRL and light rail will structurally transform city centre access by more than doubling public transport capacity.”

It also includes plans to increase access for walking and cycling and improvements to the downtown ferry terminals. While the reports also says the council needs to make the city centre more liveable for the growing numbers of people who live in and around the CBD.

While the economic growth and business activity in the city centre is also highlighted in the masterplan report.

“The city centre is undergoing a radical economic transformation at a scale and pace not envisaged at the time of CCMP 2012. In late 2018, Auckland was acknowledged as having more cranes on its skyline than any city in the United States. It is a sign of ongoing confidence in Auckland’s economy and the appeal of the city centre as a place to invest and live.

“New employment clusters have emerged in the Wynyard Quarter and Downtown with Albert Street emerging as a potentially important commercial office spine associated with CRL. The anticipated drift of commercial office space from Uptown/Aotea Quarter has occurred as signalled in CCMP 2012. Vacated, older office space has however been converted into residential accommodation leading to this area’s emergence as an important residential neighbourhood.”

And the growing changes in the CBD is something Mayor Phil Goff is more than aware of.

“We are transforming the central city for the 21st century and evolving to meet the needs of a diverse and growing population,” Goff says. “This refresh will ensure we can embrace new and creative ideas to support the development of our city centre and enhance those things that make it special – our stunning harbour and waterfront precinct, a strong retail sector, world-class cuisine and entertainment and the influence of our unique Māori culture.”

“The city centre is changing dramatically. Right now, there is $16 billion of private and public investment underway which will accelerate the transformation of our city centre,” Darby says. “To realise this vision, we’re planning to integrate the Waterfront Plan with the refreshed City Centre Masterplan to create a holistic vision that finds a place for all people."

The public consultation process for the City Centre Masterplan will run until October 18. The final masterplan is then expected to be signed off by the council’s Planning Committee in February next year.

"" An estimated 20 per cent of Auckland’s gross domestic product is now generated from the city centre alone.""
In mar 2016 Fonterra shareholder and Waikato University agribusiness professor Jacqueline Rowarth was unimpressed: "This just continues the disconnection between head office and the shareholders"

Economists have been using GDP as a measure of growth for some time, however I cant remember where they got their forecasts right of other things. Their links to the banksters may have everything to do with it.

GDP growth has been mired with increased bureaucracy. Health and safety costs have gone through the roof, and I doubt the corresponding savings in accident costs for the equiavlent are anywhere close to the costs and inefficiencies it has created.

These H & S regulations have been imposed on NZ by design. Due to the lack of males in the education system, there is now a no risk culture in the playground. Fewer kids are playing sport, because theres fewer teachers with a sporting inclination to take them. This risk averse culture has now found its way into the work place, and children from the no risk culture are now in office jobs that write the policy.

The H & S bureancracy this has created; amongst others, needs to be readdressed. It imposes an unfair time and monetary cost of smaller businesses, which are the life blood of our economiy. They keep prices down for other cartel operations. Failure to address this will only see more of the trickle up effect.

Growth in export earnings per capita is the best measure of this countries wealth. Time to put the measure of GDP; which is largely owned by overseas interests, to bed.

Auckland's future is actually not in its CBD.

It's future is its connection with Northland, Hamilton, and Tauranga.

I'd build a 30 mins commute network as a foundation for the great Upper North Island Economic Zone (Northland-Auckland-Hamilton-Tauranga economic zone).

Touche
Would probably need your comrades help though

UK been trying to link London with Leeds and Manchester Maybe same distance ish. UK has way more money, bigger population and will benefit more. Not sure it will happen because of costs.

Hamilton is a population of 170K, Tauranga 131K, Whangarei 77K. Just pip squeak towns, to use all that money. The problem for NZ is that we are tiny outside of Auckland with a huge geographical spread. We need high speed from Pukekohe first to Auckland central, 30 mins is feasible.

Just reduce immigration, let our infrastructure catch up, take a breather and see where we stand in 20 years time. Less is more, and NZ was a great country about 15 to 20 years ago, now Auckland is painful, with huge infrastructure issues and un-affordable housing.

Why bother? AT disregarded the Master Plan and ignored the Victoria Park Linear Park in it until public outcry saw them reigned in. And now central and local governments are using events happening years in the future to defer structural change like light rail. It used to be events were the excuse you used to build infrastructure, not defer it. I guarantee you downtown Auckland will look the same in 20 years time no matter who you elect.

Totally agree GV.. Same old Coat hanger linking North Shore, no walking access (still)?
And the jewel of Auckland (Harbours) will continue to be trashed and filled in - go Auckland!

The Akld (and many others) council has forgotten its mandate.

Everything is about think big and creating a city that will entice more people here, meanwhile their debt is skyrocketing and the only way to fund it is through rates increases, more parking tickets or selling assets.

If they end up selling watercare that will inevitably result in higher prices which in effect becomes an extra tax.

They really need to reign in spending, work a lot leaner and focus on the core services.

over time staff will be shifted out of the office and will be working from their homes at which point the city will have to transform from business to housing. This has already started for a lot of firms and will revolutionize central business districts as we know them today.

They never really consult with the public.

If they were honest, what they would say is: "This is what we are doing and you can comment on it, but we are unlikely to listen to what you say."