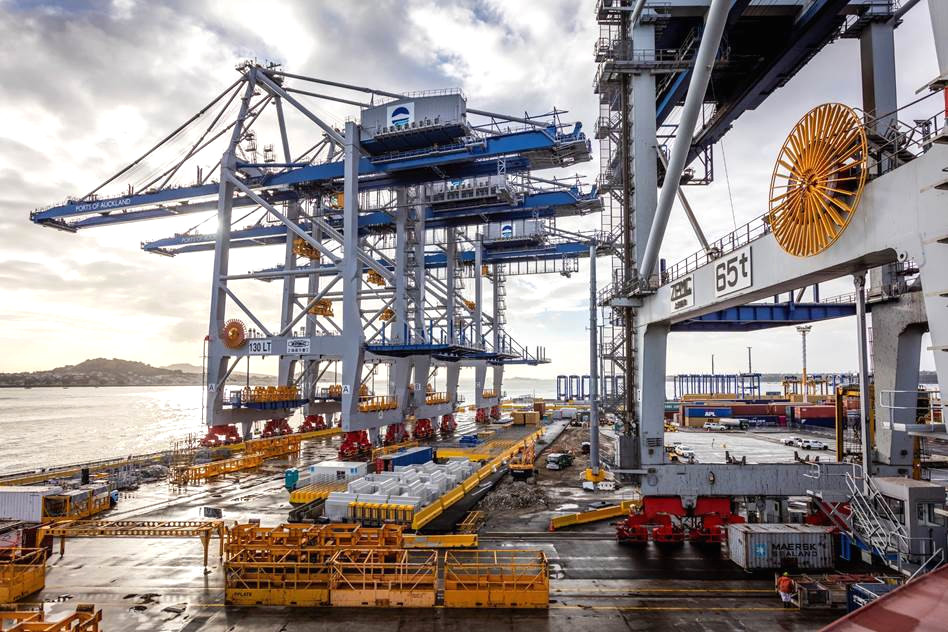 The Ports of Auckland’s 2019 Annual Report shows a 30% drop in profits and a fall in overall freight volumes as it continues with a capital investment programme to expand its operations.

The report covers the period July 1, 2018 to June 30, 2019. Chief executive Tony Gibson says it’s been a challenging, but productive 12 months for the port.

A statement accompanying the annual report says carrying out the automation of its container terminal and carrying out the necessary testing at a working port has been difficult and has led to reduced capacity, increased congestion and fall in productivity.

The Ports of Auckland net after tax profit is $53.9 million, compared to $76.8 million for the same period in 2017/2018.The company's capital expenditure has increased from $96.5 million to $104.8 million, reflecting its work to increase its capacity and productivity and improve safety.

He says the Ports of Auckland currently has approximately $500 million in borrowings, an increase of 30% since last year’s annual report. But Gibson says he’s not expecting its debt levels to increase markedly over the next couple of years.

The port has made significant progress in transforming its operations and future proofing the business, he says.

“We have completed most of the infrastructure work for automation and we are in the final stages of testing before going live next year,” Gibson says. “Automation brings significant productivity and sustainability benefits, but it also impacts some of the traditional roles in our industry.”

He says the port is expecting to eventually see a drop in the number of contractors as the changes come into effect.

Last year the Ports of Auckland bought three cranes from Chinese engineering company ZPMC for $60 million. Standing 82.3 metres high and weighing 2,100 tonnes each, the cranes can lift four 130 tonne containers at once. They were delivered in October last year and the port originally hoped to have them up and running within five to six months. But commissioning the massive cranes and automating the ports operations to work with them hasn’t been easy and they aren’t now expected to be fully operational until February next year.

But Gibson says it’s a step in the right direction for the port.

“The successful implementation of this project will have a massive impact on our business. It is also a game changer for the Auckland and upper North Island supply chain.”

The Ports of Auckland is also forecasting a reduction in the annual dividends it pays to the Auckland Council, which has 100% ownership of the port.

Gibson says the company "is in good shape and good heart".

"The projects underway are a significant investment in our future and they are going well. We look forward to the year ahead, as automation comes on stream and we begin to see the results of the hard work of the last few years.”

Other projects in the pipeline include construction of a new car handling facility which is expected to be completed in August next year, plans to build  a new wharf on the north end of Bledisloe Terminal and further dredging of the Waitemata Harbour to allow larger vessels to access the port.

1. The amount of debt relative to income for such a dull, non growth business seems excessive.

2. The 15% reduction in car volumes is telling - this isn't a short term trend line, car sales follow longer term trends linked to economic performance so we should expect this to continue to slow down. Freight volume is also declining. Given we are apparently still seeing increases in population this suggests significant reductions in purchasing power or consumer confidence.

3. This is the second business in a few days (Fonterra) to declare zero dividends. Again this will have knock on effects.

This Company will not recover from its slide downwards until it is shifted not to Marsden Point or to Tauranga but to Orere Point in the Firth of Thames. Here we have very deep water close to the shore and it is close to the city still so freight costs for imports / exports will be cheaper. At present Tauranga is taking 86 trains a week from Wiri that is Auckland's big manufacturing area to Tauranga Port.
The big ships can carry 20,000 containers whereas the ships calling here now can only carry 5,000 so one big ship with new designed engines can carry the total load of three ships calling now. This will be great for the environment and very little dredging would be required.
The Orere Plan would see New business for Banks - export Department
Exporter has freight bill paid straight away.
Transport Companies paid on day job done. No invoicing at month end. No paper work for truck driver. Fast turn-around time 6 - 10 minutes. Morwe work completed in the day. Less chance of bad debts or slow payers.
Port Company paid on day container arrives. No invoicing. Saving on paper and time.
Shipping Company paid when ship arrives at Orere.
Big ships carrying load of three current ships calling here. Bigger loads mean container rates are lower.
Instead of three ships smoking all the way to Europe or wherever one ship with diesel generators driving electric motors far better for environment.
Bird mudflats not disturbed too far down the coast.
Deep water 30 metres in channel and still 17 metres close to shore. Big ships have draught of 16 metres.
Freight costs for Auckland cargo cheaper not having to be railed down to Tauranga or transported to Marsden Point. Orere is close to Takanini.
The Hamilton inland container terminal now has a more useful future.
Orere could handle all our container exports and imports.
The Port Company should not waste any more money on dredging the present channel.
Concentrate its efforts on shifting to Orere that will be the life saver of this Company.
You cannot continue to lose trade at the rate you are losing it now.

I can see the attraction. I checked the distance from Auckland. 67 km. A bit closer than Marsden but to access it you would need a railway and or a motorway. Be interesting to compare the costs of this versus upgrading and extending the existing services to Marsden. Once a container is on a train, the incremental cost of each extra km is not that great.

It is if you have to recover hundreds of millions of dollars from upgrading the line to get those containers from one place to another.