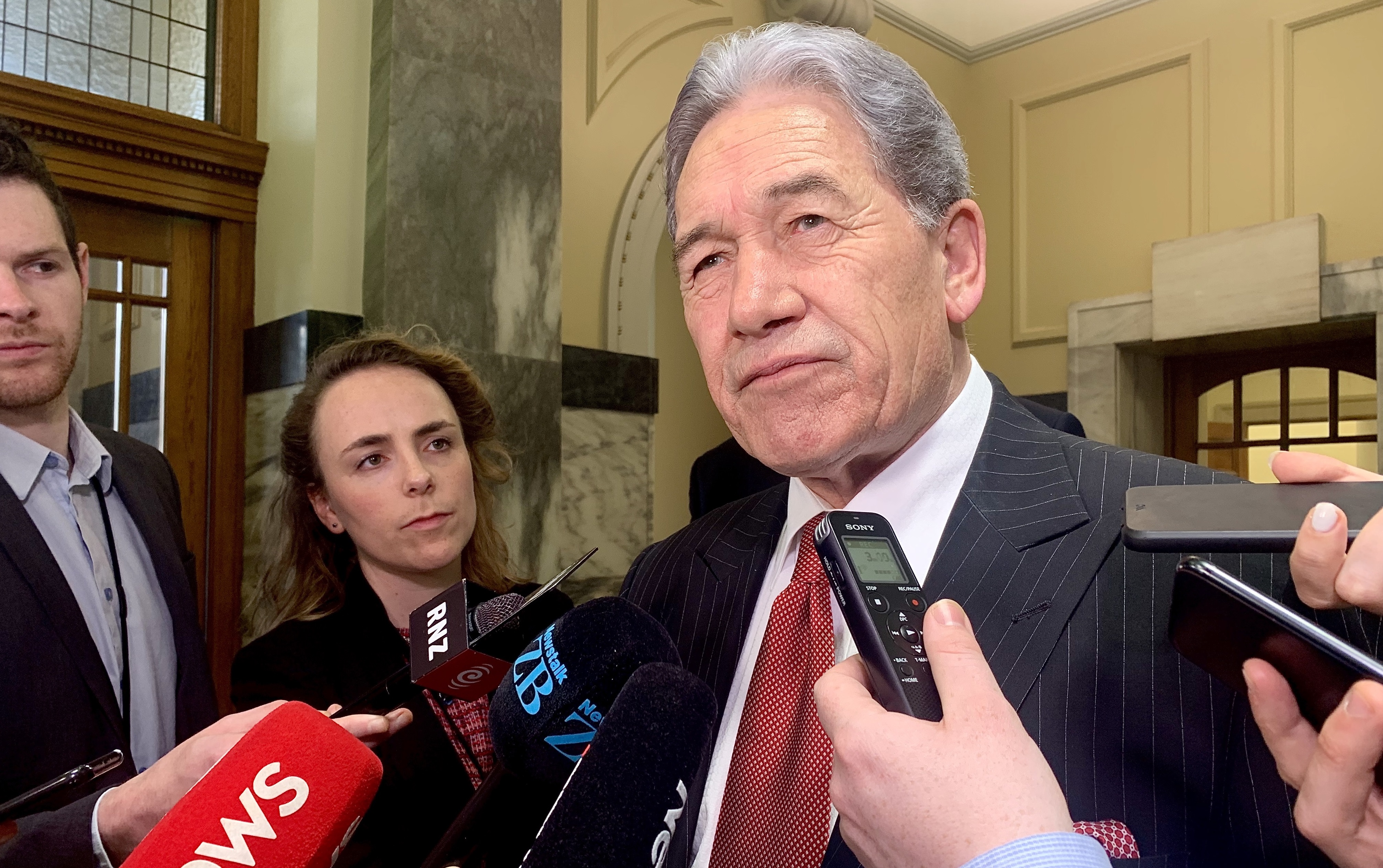 The New Zealand First Foundation will be looked at by the Serious Fraud Office (SFO), as the Electoral Commission believes donations made to the foundation should’ve been treated as party donations.

The Electoral Commission said based on the information available to it, it has formed the view the donations “were not properly transmitted to the [New Zealand First] Party and not disclosed as required by the Electoral Act 1993”.

“New Zealand First’s arrangements for collecting donations has been the same as other political parties. The New Zealand First Foundation is built upon the trust deed of the National Party,” Peters said.

Prime Minister Jacinda Ardern wouldn’t pass judgement on her coalition partner, and said she'd leave the SFO to get on with its investigation.

Ardern said she spoke to Peters on Monday, but didn’t reprimand him.

The Electoral Commission said it didn't have the investigative powers to decide whether the foundation’s “failure to transmit” and its “non-disclosure” meant offences had been committed.

“These matters have therefore been referred to the New Zealand Police, which have the necessary powers to investigate the knowledge and intent of those involved in fundraising, donating, and reporting donations," it said.

The Police responded saying it has assessed the file and will be referring the matter to the SFO.

The investigation follows Stuff in November reporting it had seen New Zealand First Foundation records that suggest breaches of the Electoral Act.

“I had already advised the party last week to take this course of action and itself refer the matter to the police, which the party had agreed to do.

“This does not imply any impropriety but is intended to ensure the party, as with all parties, have robust arrangements.

“If the review deems it necessary for New Zealand First and all parties to develop new arrangements to receive donations the party will consult with the Electoral Commission.

“This party is built on the support of loyal supporters and donors and believes it has followed the law implicitly.

“I am advised that in all its dealings the Foundation sought outside legal advice and does not believe it has breached the Electoral Act.”

Peters on Sunday issued a statement saying: “This morning I have recommended to the New Zealand First Party President that she begin preparing a complaint to the police over the massive breach of New Zealand First’s party information.

“Ongoing media stories using as their source stolen information are designed to skew an even political playing field.

“New Zealand First has so far been sensitive to the circumstances surrounding the theft of party information but can no longer tolerate the mendacious attacks against the party and its supporters.”

Asked whether she “trusted” Peters, Ardern didn't give a yes/no answer, but said: “I have an excellent working relationship with him. We have proven that we can deliver a strong stable government and ultimately the issues that have been raised today are not a matter for any of us to simply give a word. It’s actually for these things to be properly investigated, and that is what is happening.”

Ardern also said the issue underlined the need for New Zealand's electoral law to be reviewed, including by an independent authority. Yet she said this was unlikely to happen before the September election.

Enough of the games in times of trouble Winny.
At the moment I put NZF in the same basket as Labour, can't get anything done and can't make the big calls but pleanty of blar blar blar about the small stuff, which is not the big issue at present.

Winston is a crook , and his belated efforts to distance himself from what occurred will not wash with any of us .

He will attempt to muddy the waters , duck and dive , deny , cloud the issue , smokescreen , spin and fog the truth .

He knows everything about the management of NZF, he established the party , and he runs it like a private enterprise ........ he has the memory of an elephant , and his obfuscation over this is just that ......obfuscation .

He studied law at University , and he would have known that the Trust structure that he set up was designed to hide or obscure the sources of donations .

We have now learnt that this man cannot be trusted

ICYMI: "This morning the Electoral Commission handed their file to NZ Police. We have assessed the file and will be referring the matter to the Serious Fraud Office.

As this matter is ongoing we are not in a position to comment further.

this is interesting in he is backed by some of NZ wealthiest people whom like to remain unnoticed.
so a good way to lose that backing

Winston 1st has effective veto over much of what the government does, and leverage to install minor policy changes. Donors get huge bang from relatively littler bucks from being in Winston's good books.
The donor lists and recipients of PGF money need to be checked against each other very very carefully, we've already had a couple of very dodgy looking arrangements being reported upon.

Donors and the commercial fishing lobby too. Those cameras.... where are they now?

Plenty of process & procedure yet to be done.

Any bush lawyers know what transmission means in the legal lingo?

Its actually lingo for sending an instruction in legal circles, utterly archane much like NZF.

Its actually lingo for sending an instruction in legal circles, utterly archane much like NZF.

Can't even fill out a pension form, it is contagious in NZF.

There are only two possible alternatives over Winston’s incorrectly filled out superannuation form and his claimed lack of knowledge of the NZ Foundation. One is incompetence, and the other even more damming.

Time to boot this lot out, the next election cannot come quick enough. Bye bye Winnie or is that Whinny.

he will make this work for him, oldies love him standing up to the authorities

Perhaps he'll start talking of a need to slow down migration from China. Might play well at the moment. A Brash approach.

Given that Winston was going to involve the Police about these stories relating to NZF he should now be relieved that the SFO are now involved.

that to me was smoke and mirrors, he got ahead of todays story.
I still think he will survive this election as he is the ultimate survivor

As another comment above points out his voter base will love to see him stand up to the authorities. I am a bit surprised that the foundation actually has any money, I thought he would have drunk it all. We'll just have to wait to see what the money was spent on.

Not too much 'standing up to the authorities' at the moment. Peters, fresh from laying down a diversionary smokescreen alleging mendacious malfeasance by his opponents, has tonight switched to mr reasonable compliant mode in announcing a review of NZF's donation processes. Apparently NZF capo and hot shot lawyer Brian Henry and Winnie himself, also legally trained, are not aware of any inconsistencies. Nothing to see here, you 3.6% of voters still supporting us.

Remember - only days ago at Waitangi he refused to answer any questions at all. For months he dined out on 'there's only one party under investigation by the SFO in this country' whenever he was quizzed about New Zealand First. Even now he is trying to imply National use the same setup, despite National declaring donations to the National Party trust apparatus as donations to the party itself. And suddenly, he is very coy, gun-shy and sounding strangely compliant?

Golly, could someone actually have something that sticks on Winston, and does Winston himself know it?

dodgy politicians goes together in this country like bacon and eggs.
are they not all for sale to gain power, first national dodgy deals and tie ups now
NZ first are at it and then we have the unions telling labour what to do and whom they want in,
even ACT has to follow orders to get its seat who can forget the cup of tea great look that was
all sides when in power sling our money at their backers
one of the worst was the last government and a minister doing a deal for a media company to defer its payment he had previous ties, that as a coincidence moved on a trouble some reporter
i have a chortle when i hear reports how our parliament system is corruption free and cleaner than mot countries.
try telling people that the provincial fund is not a NZ first slush fund to buy votes
https://www.stuff.co.nz/entertainment/tv-radio/68750151/the-sad-end-of-j...
https://www.transparency.org.nz/examples-of-corruption-in-new-zealand/

So to wrap this up...there is no wrong doing here. The evidence is clear that 'failure to transmit' infact clearly indicates that on several occassions the fax machines used by the party to transmit relevant documents pertaining to donations either did not answer, ran out of toner, ran out of paper, were jammed by someones tie being sucked in with the sent document, were actually received but were logged in memory and can't be retrieved or were transmitted to the office answerphone because the fax number was wrong in the last digit of the sequence dialed...don't laugh too loudly...your lawyer and chemist still use this technology!

Another donations scandal. All working in Labs favour who struggle to get any donations. That said lobbying is part of what has ruined the US, and we should do what we can to stamp it out here.