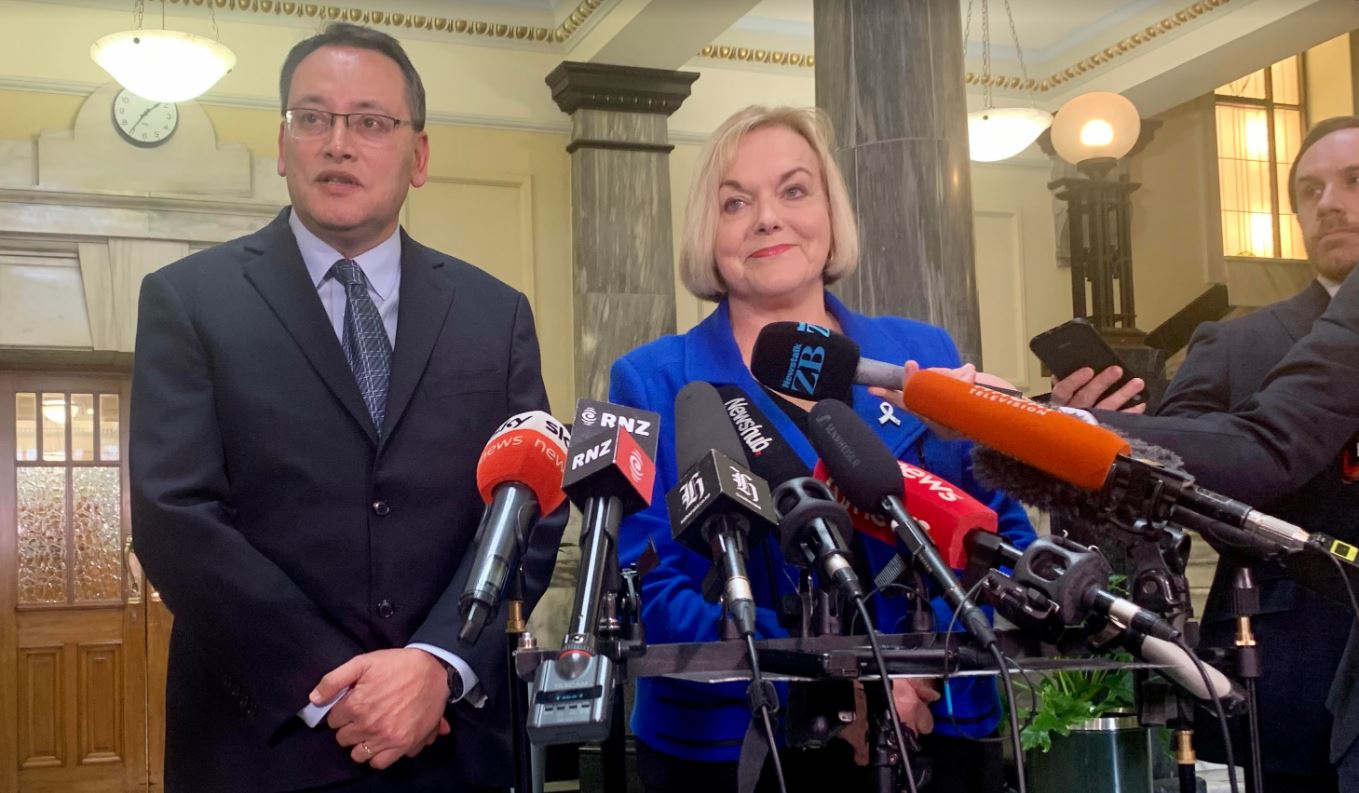 The National Party caucus is backing Judith Collins as Leader and has selected Shane Reti as Deputy.

National said both selections were “unopposed”.

Reti will remain Health Spokesperson. Collins said she would work with Reti on allocating portfolios to the rest of the National caucus. These will likely be announced on Wednesday afternoon.

Political commentators are picking Simon Bridges for Finance, saying he has the grit to go up against Finance Minister Grant Robertson. Andrew Bayly is another potential candidate. He's clued-up on finance, but less of a political operator.

Reti's selection follows Gerry Brownlee stepping down as Deputy in the wake of the party faring poorly in the general election. Receiving only 25.6% of the vote, National secures 33 of the 120 seats in parliament.

Reti rose to prominence in July when Collins appointed him Health Spokesperson following the incumbent, Michael Woodhouse, getting caught up in a Covid-19 patient data breach by former National president, Michelle Boag.

He doesn't have any political baggage of note and has been National's spokesperson for tertiary education, skills and employment, Treaty of Waitangi negotiations, data and cybersecurity, and disability issues.

While he's never held a ministerial role, he's had a successful career outside of politics.

Reti is a medical doctor, who practiced family medicine and dermatology in Whangārei for 16 years.

He served three terms on the Northland District Health Board, is registered with the NZ Institute of Chartered Accountants, and was an Assistant Professor at Harvard Medical School.

Reti has also worked for New Zealand Trade and Enterprise in an economic development role as Beachheads Advisor to the New Zealand consulate in Dubai.

Speaking to media, Reti likened himself to Bill English. He said he was akin to saying less and doing more.

He said he decided to go for the deputy leadership role two weeks ago.

Collins, who often refers to Reti as “Doctor Shane”, said he was “a hard-working, intelligent MP with all the skills needed to be an effective leader”.

“His detailed examination and prosecution of the Government’s handling of Covid-19 helped improve the response for New Zealanders," Collins said.

“Dr Reti’s knowledge and history working in the health sector will be an asset as Parliament deals with the impact of Covid-19.”

Collins said it was “an enormous privilege” to be reconfirmed as Leader of the National Party.

“I’m looking forward to leading a strong, united and focused Opposition that will deliver for all New Zealanders,” she said.

“The Whips have an important role to play in helping ensure all our MPs are focused on holding the Government to account,” Collins said.

“I’m sure Matt and Maureen will do a wonderful job.

“National’s MPs are energised about the term of Government ahead. We owe it to the people of New Zealand to provide a strong and effective Opposition as we navigate the difficult economic and health issues ahead of us - and this is exactly what National will do.”

Top quality person in Dr Reti no doubt. Merv from Manurewa (Christchurch) will be very upset and will be calling talk shows soon.

Bet you the backstabbing would have already started at the national party. If they want to move forward that have to make a lot more changes.

2023 is a loooong time away, plenty of opportunities to toss out a few leaders and deputy leaders..

I'm still picking it'll be Bridges / Reti that go into 2023, Luxon will want to keep his powder dry.

Luxon is of completely unknown quantity. Why his tenure at Air NZ is touted as being an attribute is beyond me, as a passenger, and a whole lot of AirNZ staff too, from top to bottom I would suggest. And then there is this re-born christian thingy. Sure keep the powder dry but looks like only a cap gun’s worth if you’re looking for a bang.

Thanks. I was looking at the wrong track.

A really quality leader and far better than ones from some sorts for communist youth program.

This kinda really smart and hard working individuals are what NZ needs at all levels!

Not that suprising when you had farmers husbands and farmers wives all over New Zealand voting for Labour because of covid and they didn't want the Greens to have any say in Parliament. Take out covid and New Zealanders blind belief in Jacinda and the result would not have been so bad for a very poor National caucus. Labour had no policies of substance during the election and have failed and will continue to fail on the housing and poverty fronts.

probably a few farmers too

I think the farmers wives voted Labour because they liked Adern a heck of a lot more than they liked Collins.

I think the same could be said for the NZ Public at large.

ex agent - one of the most patronizing comments I have ever read on this site. Farming is not a male only activity. I know many women who are farmers or is that farmers who are women. Women are no longer some sort of plus one.
After an EDIT to previous comments - this one now irrelevant. Thanks

Funny Wilco, but I also read it as farmer's wives (they're more married that partnered, pers com) rather than the males, and put it down to the nurturing instinct. We aren't many generations away from hunter-gatherer; not enough to change that stuff. Decor-changing is just nest-building in disguise, suburb-ratings and car-model are just status-flaunting. We haven't come very far that way.

And I thing the 'keeping the Greens out' is unlikely to be the reason (across the board) but I laugh because the greens represent the message of limits. And you cannot vote limits away; the longer you ignore them the more you are in trouble.

The comment was originally only - farmers' wives - that I took umbrage at.
powderdownkiwi - I respect your opinion, I do read your contributions although sometimes I struggle to follow and disagree more than agree.
It doesn't matter why the provinces voted Labour - it is up to Labour to use the centre to their advantage or lose next time.
Question - If the 'Greens" were solely focused on the environment (like their name suggests) instead of wanting to socialize our wealth and it's generation would they be more or less effective?

The tall poppy syndrome is well and alive in NZ. Neither his license to practice medicine nor his shiny Harvard PhD will get him much popularity in these parts.

Neither did Nick Smith or Gerry Brownlee, or many others.

Many in Christchurch are somewhat baffled, and in fact of the opposite mind, that Mr Brownlee has self appointed himself as the guardian of their interests. For a start all of the EQ sufferers at the hands of EQC & Sth Response would undoubtedly have great difficulty in summoning up much trust. The thrust of that attitude and persuasion, is rather well illustrated I suggest by Mr Brownlee being voted out of a seat, which largely as Fendalton, has been a National stronghold majority seat for as long as there has been a National Party, actually the foundation electorate for Sir Sidney Holland their first PM in 1949. Think the word hubris is in play here, yes indeedy.

he likes to be called DR nick smith, .
why does judith call him dr shane , is that because she cannot pronounce reti?

Canny choice! Zero baggage and a promising CV.
Gotta wonder if he has a forceful enough personality for the role, but hopefully his colleagues and the public will respond to competence over petty antagonism.

Yes, Judith and he might make a good pair. Funny how we seem to have that, eg Clark out front and Cullen looking after the nuts and bolts, Key the salesman and English the factory manager, Jacinda and Grant Robertson, again, one out front and another managing the back office.

Except Judith is not the salesperson. Voters ran from her and Gerry. But maybe a good cop/bad cop could work.

Comparing Clark to Collins - good one. Helen Clark was one of our best PM's, Judith Collins is not even in the same ballpark as HC as a leader and she certainly will never be PM.

Reti to Cullen though - yeah I do agree with you there, similar detailed, hard worker in the background type of people.

Simon Bridges for Finance: He'll get eaten alive by Grant Robertson, who in turn will look like a plonker.
Perhaps National could hire Jenee to school him up on the basics:

- Fractional Reserve Banking
- MMT in Relation to Taxation
- Inflation/stagflation
- Modern Monetary Parallels [Bretton Woods] End of Empires
- Geo Politics and the Petrol Dollar in a Fait World
- General Schools of Economic Thinking [Keynes, Austrian]
- .. Maybe Improve his NZ Economic History .. but he might be alright there.

It's all so much Jesuit theater, but yeah .. give him and his runner up a crash-course, like bill them $30K - $50K, HELL give them flash cards lol. We all know they need it! Robertson is formidable compared to National atm.

We need alternative and cogent economic thought form National - it's good for democracy. "IT'S THE ECONOMY STUPID". I can't be bothered watching a bunch of "Got Ya Questions", which are only thought to be clever by Bridges and the National party. Questions batted down by Robertson due to National's poor understanding of; Money Creation and it's Flow.

Bridges as Finance spokesperson is an... interesting choice. I'd like to see newbie Simon Watts given an assistant's role in this area - as a CA you'd hope he'd be able to get his head around it pretty quickly and would be good support for Bridges/whoever to lean on.

Reti seems like a decent guy, I just hope his ability to get is party elected to the treasury benches, isn't also like 'Bill English'. He has also just lost his seat though which might put a dent in the credibility.

However, he is the sort of person National needs at the top. An achiever, someone that can work with the govt when it matters and can oppose where needed too, but not make it Nasty and off topic like collins does.

He will struggle with Collins personality though, the sooner she is gone the better for Reti to stand up and start to get his party some credibility with the public again.

If he wants to to be like Bill English then he needs to back the wellbeing approach aimed at improving net welfare per capita for all New Zealanders.