Waikato's Level 3 boundary extended south; Five of the 29 new Covid-19 cases in the community from Waikato

Waikato's Level 3 boundary extended south; Five of the 29 new Covid-19 cases in the community from Waikato

Level 3 restrictions in parts of Waikato will be extended to include Waitomo, Te Kuiti, Waipa, Otorohanga, Te Awamutu and Cambridge. 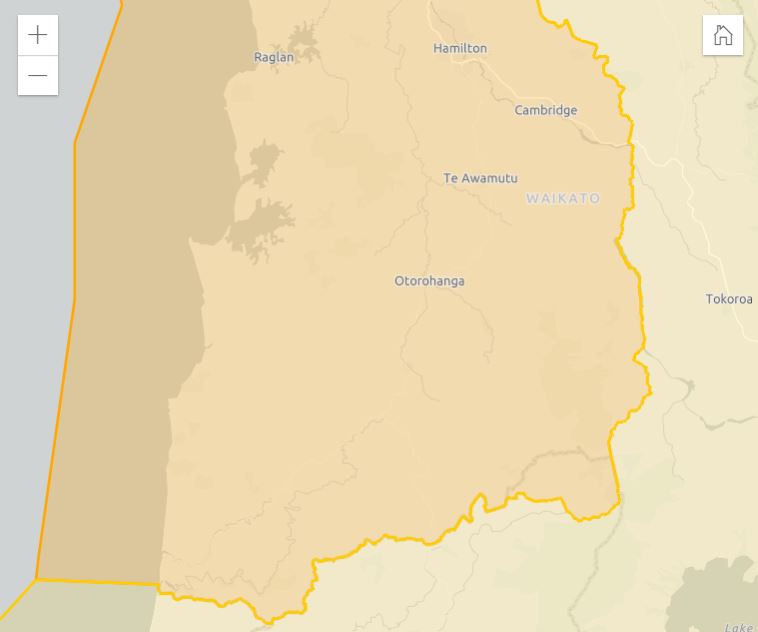 See an interactive version of the map above at the official Covid-19 website. Note: the map previously uploaded to interest.co.nz was incorrect.

All five Waikato cases are from areas that were already in Level 3 lockdown. There is now a total of 22 cases in Waikato.

Seven of the Auckland cases are unlinked. All the Waikato cases are linked. One of yesterday's cases remains unlinked.

Four cases are in ICU.

Here's the latest from the Ministry of Health:

*Today’s cases
One previously confirmed Auckland case has now been reclassified as under investigation and removed from the overall outbreak tally. The recently reported Upper Hauraki case was initially reported as a Waikato case was intended to be included in yesterday’s figures for Auckland as the case is within the Counties Manukau DHB - it will now be included today.

**Wastewater testing
There have been positive COVID-19 detections in wastewater collected from areas where there are known positive cases.

As expected, COVID-19 was detected in samples collected from Raglan on October 4 and 5 and further testing is underway. There was also a positive detection in wastewater samples collected from Palmerston North, where a previously reported case who tested positive for COVID-19 is isolating. Additional testing is underway with results expected tomorrow.

The virus continues to be detected from several sampling sites in Auckland.

Negative results were returned from samples taken in other areas of the Waikato. These were from Hamilton, Huntly, Maramarua, Matangi, Meremere, Ngaruawahia, Putaruru, Taupo, Tauwhare, Te Kauwhata, Te Kowhai and Tokoroa. Samples from Hunterville (in the Rangatikei region) and Feilding (in the Manawatu region) were also negative. Further testing is in progress.

The person visited the centre on the morning of October 4. The risk to the public is thought to be low. The person was outside in a tent for testing and also queued in the open air for a meal pack. Everyone who visits the Mission is required to wear a mask and stay two metres apart.

Many visitors to the Mission are vulnerable and have complex needs and staff are working with Auckland Regional Public Health Service to ensure the safety and well-being of its clients and visitors. The Mission team is contacting as many people who receive services at the site as they can to encourage the uptake of testing and to check on their health status. Staff at the Mission also undertake regular surveillance testing.

Waikato testing and vaccination
Yesterday in Waikato, 6480 COVID-19 swabs were taken throughout the region, and 7976 vaccinations were given. To date, 72.3 percent of the eligible Waikato population have had their first dose and 45.5 percent are fully vaccinated.

Pop-up testing and vaccinations begin today in the Kawhia area. There is testing from today until Saturday at Maketu Marae and mobile vaccinations at Taharoa and Marokopa on Friday.

Waikato Hospital
Following the exposure event at the Emergency Department at Waikato Hospital that was reported yesterday, all 50 ED staff have returned negative COVID-19 tests, with most cleared to return to work. Of the staff who visited ED at the same time as the case, 30 have returned negative tests and a further 22 tests are still to be processed, with results expected this afternoon.

In the eight suburbs yesterday there were 2,893 swabs taken.  More than 1200 people have been tested in Red Beach in the past two days.

Hipkins announcing an extension of the boundary further down the Waikato. Futile.

Community transmission is here to stay: it's the new norm.

Agree, we will have COVID everywhere in a matter of weeks.

A good reason for the slow coaches to get their jabs.

You'll just know it for sure in a matter of weeks.

School holidays = mingling from lots of different areas and then returning home to larger towns = multiple seeding events all over the country.

especially if you're a patched member, roam free boys.

Nah mate, the gangs will show social responsibility by requiring initiation jabs for their big brave tribe, and introducing a "no jab, no gun" policy.

But they'll need another 2.7 mill up front unmarked.

Aye futile indeed.  listen to the sound of stable doors slamming and the distant echo of horses hooves,  over the hills and far away.

After school holiday finishes, there would be cases in lower NI and parts of SI.

Also, how come that I get the feeling that Gangs have some sorts of special rights in NZ? And, the COVID makes it even more obvious!???

There probably already are. What we see now is from interactions that were happening 5-10 days ago.

Ardern is toast by the next election. There are so many own goals like allowing gangs to cross borders, paying them to "run programs", etc.

Yes she is toast, given the many mistakes and ridiculous delays and amateurism of this year's "response" to Covid, and the ridiculously weak approach to law breachers and the gangs, but only if National manages to sort itself out and put out to the public a credible alternative. National still looks quite a frustrating mess to me, right now.

Regarding the housing crisis, yes this government has been extremely ineffectual, but we should not also forget that National had done little or nothing to sort it out either, and they had actually repeatedly denied that it was a crisis. Maybe if National was less the party of parasitic landlords, and more the party of real businesses and the real economy, they would get a better chance.

When it comes to housing, both main parties have been a joke, to be honest.

To be fair when was the last time the current government described it as a crisis despite the insane price increases they've overseen. They've all but said it's a good problem to have. To say the ramp up in unaffordability started with John Key would also be very kind to Helen Clark.

Kind? She passed two major reforms of the Income Tax Act, Cullen never once included reform of Capital Gains Taxes in any of them and suddenly it was the world's most important issue once they ended up in opposition. And prices still rose faster under her administration than they did for almost all, possibly actually all of the Key era. But these chimps want to carry on like John Key personally invented homelessness. Let them fling their shit at each other.

PM Ardern is actually doing alright on Covid. She is probably striking a good balance on most things - except EQ.

If the science is to be believed, this slow vaccine roll out could prove advantageous as the vaccine is said to be most effective in the first 6-9 months.

Fresh air, sunshine, exercise and healthy eating is a message that should be delivered alongside the vaccine recommendations - especially since lockdowns have forced sedentary lifestyles.

Locking infected people in hotels without opening windows is wrong. I'd smash the window [and clean up the glass] if I was in such a situation, so if that's what gang members are doing, I wouldn't hold that against them.

Well you'd think so. But we live in a nation of sheep!

North Island will be level 3 soon, followed by South Island...

Nifty1 - I hope so, so we can get rid of the Auckland border and freely roam the NI in Lev3.

Families have been seperated across borders for too long, the mental health of many is fragile.

Two deaths both with underlying heath issues WTF ! This Granny/cotton wool bullshit has to STOP !

We've only had two deaths because of the measures, so it's not really fair to use them as evidence against them. Like throwing away the shield you're hiding behind because the hail of arrows isn't currently harming you.

And those measures were suitable when we had a small portion of our population with some immunisation, now we have a huge portion. How much longer do you justify imposing those conditions on people who did everything they were asked when they were asked for the sake of the ones who just refuse to?

Welly is nearly 90% vaccinated so should avoid level 3 based on the current mantra.

Certainty in numbers?  No.

Dr Michael Baker [epidemiologist / Ardern advisor ] described the current NZ Covid situation as the " Iceberg phenomenon ", where the numbers are the tip of the iceberg and what really is happening is unseen below the surface.

There is no incentive to get tested.

If you test positive they drag you from your house and lock you up in corona-prison.

You mean Coronagangprison. Get it right.

Have heard from a high ranking police officer, that those places are a disaster and you don't want to go anywhere near them. All due to the quality of the current occupants.

I had a cold right before Level 4. I lined up for 5 hours to get tested in Auckland to do the right thing. Negative thankfully.

Now that I know there are gangs punching up Jet Park and getting away with whatever they want, I will not get tested again. I do not care.

Can't say I disagree with you there.

Get your GP to do it, it's free

Quarantine is the NZ version of Squid game.

yep a group of us were saying that exact thing the other day, if we had a sniffle or something then just ride it out (unless you got real sick), don't get tested. I would think a lot of people think the same.

We may as well open the borders now.  Let's respect the mental health of New Zealanders.  Families have been torn apart by this border lockdown.

Coming ready or not

More confusing messaging from the government - how hard is it to release the map at the time of announcement?

They won’t get the map right anyway. According to the current map the Waikato towns of Tuakau and Pokeno are in Auckland. I live near Onewhero (Waikato) in Auckland lockdown area. Followed a Porsche and several other non local cars up from the river yesterday. Apparently they are running the border on back roads through to the rest of Waikato. Roads are certainly busier than normal through the village.

At least now when someone asks why you're not vaccinated, i can say Hipkins told people to 'do their own research'.

When did Lanthanide stop posting? Has the Government decided to stop the spin?