Opinion: How to get around the problem of falling goods exports

Opinion: How to get around the problem of falling goods exports
13th Oct 09, 11:54am
by infometrics

By Infometrics economist John Carran Let's be clear, goods exports make a valuable contribution to New Zealand's economy. They make up around 78 percent of total exports and 24 percent of GDP. On the whole, goods exporters are more productive than their domestic-focused counterparts. They expand domestic production beyond that possible from a sole focus on New Zealand's tiny market. They battle through large and volatile swings in the exchange rate, high transport costs, and stupid self-interested trade barriers in overseas markets. Goods exporters are certainly worthy of admiration. But let's not get overly obsessed about the contribution goods exports make to New Zealand's economy. It is one of the many cogs upon which the success of the economy depends.

Goods exports' share of the economy has swung around a bit over the past two decades. But if you remove the peaks and troughs, the medium-term trend is relatively modest as the chart indicates. Arguably, this trend has been biased upward by the extraordinarily high commodity prices in the early to mid parts of this decade, which substantially boosted the prices and production of commodity based goods exports. However, there are two big developments that are likely to prevent goods exports being the powerhouse in the future that many wish. The first development is that as New Zealand gets richer there will be a natural tendency to move away from goods production toward the provision of services, which are predominantly domestically focused. Goods producers tend to be more productive than service providers in wealthier countries allowing goods producers to pay higher wages without substantially raising prices. Service providers on the other hand are forced to push up their prices by more to meet rising pay demands. Over time this drives down goods prices relative to services prices resulting in a decrease in the share of goods in output. Related to this first development working against the export of goods are the shift of manufacturing production offshore to take advantage of cheaper cost structures and be closer to overseas markets, and a greater preference for services (for example, discretionary healthcare, eating out and financial services) as populations become wealthier. Static or declining trends in the shares of goods exports in the economy are evident in rich countries like Australia, Canada, Norway, Sweden, Britain, and United States. The second development that is against the export of goods is New Zealand's ageing population. In the future there will be a dwindling proportion of people of working age. There won't be the supply of labour to sustain large scale production of goods in New Zealand to the extent necessary to boost goods exports as a share of the economy. A larger share of those of working age will be sucked into industries servicing retirees such as healthcare, retirement accommodation, retail, and financial services. Greater immigration will help meet the needs of an ageing population at the margin, but the tide of older people is so great that it will take an unfeasibly large and sustained inflow of people to counter the diminished share of workers. For those that see the export of goods as the salvation of New Zealand's economy this might all seem rather gloomy. But the situation can be brighter than this. In a world where production is increasingly sourced from low cost countries more important than what's produced in New Zealand is how much income New Zealanders earn from all sources. It is possible for New Zealand to become wealthier with a lower share of goods exports if productivity is raised across all its industries and if New Zealanders invest wisely in assets here and overseas. New Zealanders need to become owners not just of high yielding domestic assets, but also overseas assets either through ownership of shares or through direct stakes in overseas based operations. There will always be parts of New Zealand's export sector that will do well. Some of our primary producers are striving and succeeding at raising the value of their exports through innovative products that leverage our country's comparative advantages. There are some high profile high-tech manufacturing export successes. But for every export success story there will be a fading star. Overall shrinkage of our goods exports as a share of the total economy is likely to be inevitable in the longer term. The government can assist goods exporters to make the most of the environment they face by continuing to work bilaterally and multilaterally to reduce trade barriers, and reduce its influence on the exchange rate by keeping public spending in check. But policies that primarily seek to counter the dominant forces working against the production of lower value goods exports in New Zealand will be counter-productive. Better to focus on boosting the mediocre productivity of New Zealand's domestic sectors and improving New Zealanders' investment performance. 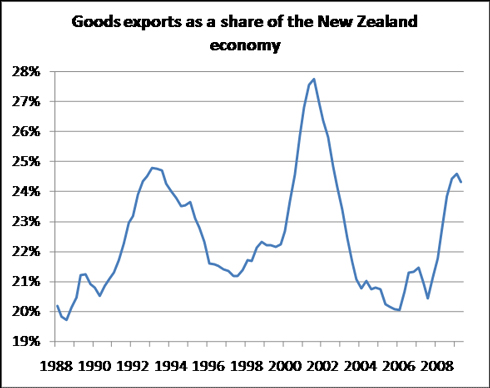 ________________ * Infometrics is an economic information and forecasting company based in Wellington. To find out more, see its website here. This piece first appeared in the Dominion Post on October 10, 2009.