Mike Pero Mortgages and Infometrics reported their Property Cycle Indicator (PCI) fell in the month of December for the first time in almost two years as the number of houses sold and the time taken to sell the houses deteriorated.  The PCI is a forward looking indicator that includes the number of houses sold, the time taken to sell a house and the changes in prices. However, Mike Pero Mortgages Chief Executive Shaun Riley said the housing market remained in expansionary territory and he pointed to a rise in the median house price in December. Infometrics forecast in August last year that house prices would rise 24% in the next three years. 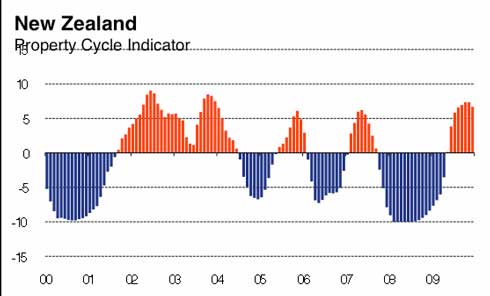 Here is the full release below.

The New Zealand housing market continues to hold steady, according to the latest Mike Pero Mortgages-Infometrics Property Cycle Indicator (PCI). "The nationwide PCI was lower in December than previous months, as growth in house sales was at its weakest since April 2009. However, sales volumes in the December quarter were still up 31% from the end of 2008, indicating the housing market remains well in expansionary territory," says Mike Pero Mortgages Chief Executive Shaun Riley. "Although sales activity showed signs of softening, the median house price rose $5,000 from November to $360,000, which was up 9.62 per cent from December 2008." The Mike Pero Mortgages-Infometrics Property Cycle Indicator fell slightly to a positive 6.68 in December, from 7.34 in November. The Property Cycle Indicator is a sensitive measure of the housing market and includes three main factors: changes in the number of houses sold; changes in price; and the time taken for houses to sell. The third measure of the Property Cycle Indicator, the time taken for houses to sell, was unchanged from November. "The average number of days to sell property remained the same at 33 days in December, down 12 days from December 2008. "Wellington was the only city where the housing market continued to gain momentum in December and is leading the market according to the Property Cycle Indicator," says Shaun Riley. Wellington led the country in December with a PCI of 9.37 (up from 9.15 in November) and Auckland slipped slightly with a PCI of 8.68 (from 9.05 in November). In the South Island the Canterbury/Westland's PCI was 3.97 (a decrease from 4.64 in November), Southland's was 2.21 (2.48), and Nelson/Marlborough's was 3.09 (from 3.21). Otago lost a bit of ground with a PCI of 3.55, down from 3.89 in November. Rents continued their gradual strengthening in December, up one per cent from a year earlier, the fastest growth since January 2009. During December floating mortgage rates also held steady at 6.0 per cent. Fixed mortgage rates were also largely unchanged from last month.