Finance company UDC, which is wholly owned by ANZ and has a AA credit rating from Standard and Poor's, has raised its three, four and five year term deposit rates by between 20 and 25 basis points (bps). The new rates will be effective from September 3. For the NZ$100,000 tier, UDC's new three year deposit rate is 6%; four year 6.5%; and five year 7%. Rates for the NZ$5,000 tier are 10 bps below these respective rates. The recent announcement by the government that financial institutions will have to have a BB credit rating or better to be eligible to apply for the retail deposit guarantee scheme when it is extended on October 13, 2010, has placed an additional pressure on institutions to obtain a sufficient rating if they wish to continue to be covered from October next year. The only other AA rated local financial institutions in New Zealand are the big four banks, while Kiwibank is rated AA- and TSB has BBB+ by Standard and Poor's. The banks are generally offering 5.5% for three year term deposits; 6% for four years; and 6.5% for five years. Rabobank has a AAA rating, HSBC has AA and Kookmin Bank has A. Financial Services co-operative PSIS, which has a BB+ rating, is offering 5.5% for three year deposits and 6% for four years. Recently downgraded Marac and South Canterbury Finance (both BB+) are offering 8.5% for three, four and five year debentures, although South Canterbury has suspended allotting investments until its updated prospectus and investment statement are registered, expected by the end of this week. Both Marac and South Canterbury have said they welcome the extension of the guarantee scheme. Other institutions that currently have ratings BB or better are Medical Securities (A-), Equitable (BB), SBS Bank (BBB), Police and Families Credit Union (BB+), Wairarapa Building Society (BB+), Nelson Building Society (BB), Hastings Building Society (BB). See and compare all term deposit rates offered in New Zealand for terms less than one year here, and terms one year and greater here. 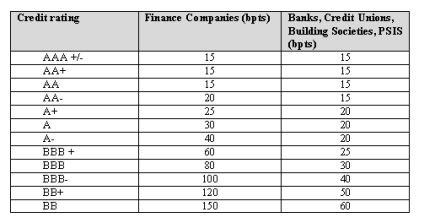