Opinion: Why falling asset values is a 'yesterday story' for NZ

Opinion: Why falling asset values is a 'yesterday story' for NZ

By Rodney Dickens The general view of most economists and numerous other commentators has been that the recovery from the international financial crisis would be a slow, long haul with lots of "de-gearing" needed following the debt binge that led to the crisis. A report issued by the ANZ economists last month runs along these lines: Economists at ANZ are expecting an economic recovery in New Zealand to run out of steam in the first half of next year. "The real message in our 'W' cycle is that we do not believe recent signs of recovery are of sufficient quality (that is, it's the wrong growth mix) to be sustainable, given New Zealand's external and balance sheet position." Having said that, the economists said they hoped they were wrong about the "W". "But navigating through the biggest financial crisis in our lifetime just seems to have been a little too easy thus far," they said. "At this juncture we can't stress enough how important the outlook for asset values is, and we see them under a fair degree of pressure."

Such views have some appeal. During the protracted property boom many investors, developers and spec builders took on lots of debt and now the prices of the assets they purchased, especially house and land prices, have in general fallen significantly. However, I think the NZ economy experiencing five consecutive quarters of falling activity is tough enough given the magnitude of NZ's debt binge during the property boom years. So just as I identified three reasons why the economic recovery would come earlier than the economists predicted in a Raving in February it is timely to look at the issue of debt, asset prices and economic growth. Key features of the debt binge in NZ were: 1. Individuals borrowing money to invest in houses, apartments, sections (coastal, resort and residential) and commercial-industrial sections/buildings. 2. Developers and investors land banking around urban areas, industrial areas and especially around coastal and resort areas. 3. Spec builders buying blocks of sections from developers on a scale never seen before. 4. Where permitted by councils developers subdivided like there was no tomorrow fuelled by demand from investors more than from end-users in some cases, leading to an adverse demand-supply balance and falling property prices. 5. Financial companies especially but also banks lending to the investors, developers and builders. The common thread was investors and developers scrambling to buy land using debt and driving land prices well above levels justified by underlying economic fundamentals like the levels of incomes, rents and end-user demand. The impact of this behaviour on land prices is especially evident in coastal and resort markets, an area we specialise in researching (see here). The greater Mangonui Area in the Far North provides an example of what happened to coastal section prices during the 2003-07 boom and subsequently (see the left chart). The right chart shows that prior to the boom local section prices were 20-40% below the national average but at the peak of the boom they were 10% above the national average, but normality has re-established itself.

Research we are currently undertaking on the Ruakaka-One Tree Point area shows what has happened to section prices in the last year in many coastal/coastalish and resort markets. The left chart below shows section sales since late 2007 including the date of the sale, the sale price and the capital value from the earliest sale on the left to most recent sale on the right. The right chart shows the % discount/premium the sale prices were relative to the capital values. The most recent section sales went for around 40% discounts to the capital values. In one coastal market where we have recently done some in-depth research sections in a premium part of the market (i.e. sections of above average sizes, northish facing with great golf course and sea views) have been selling for around 60% discounts to capital values.

The line run by the likes of the ANZ economists would appear to be that these sorts of falls in asset prices will have a sufficiently negative impact on economic growth to kill-off the economic recovery that has been signalled by recent sharp rises in most confidence surveys (the charts below). I can see why some people might swallow this line of reasoning run by the doomsayer economists. However, if we look at the mechanisms at work it reveals that the fall in section/land prices is a critical prerequisite to a recovery in economic activity not the start of another negative shock. Let's look at two case studies to work through the relationship between debt, asset prices and economic growth.

Case Study One "“ The "get-rich-quick" investor Whether it was the temptation of the apartment market, the coastal section market, houses or urban sections many investors with an eye to making a quick killing borrowed money and jumped on the gravy train between 2002 and 2007 (and some kept boarding long after it should have been obvious that something bad was about to happen). In the coastal and resort section market many hoped to resell the sections before title was issued meaning they never had to pay/borrow the full amount for the section. A few years ago a real estate agent in Mangawhai Heads told me that every section in one subdivision had resold at least once before title. Titles have now been issued in most of the subdivisions in question with few new subdivisions now proceeding. But the real pain was felt by the investors when they had to front up with the full amount to settle and start paying interest on the loan, sell at a loss, walk away from their deposit or face mortgagee sale. For many of the "get-rich-quick" brigade the most pain will have been felt when mortgage interest rates were at peak levels back in early 2008 (see the left chart below). This is when these investors will have had to curtail their spending, which is what matters most in terms of the impact of this sorry saga on economic growth. More generally the peak of mortgage interest rates is when many people who borrowed during the property boom will have felt the suck of mortgage servicing costs on their disposable income most. It should therefore be no surprise to find that the trough in consumer confidence coincided with the peak in mortgage interest rates (see the two charts below). Equally, it shouldn't be a surprise that the massive cut in mortgage interest rates since early 2008 has underwritten some recovery in consumer confidence and a housing recovery. There will be more mortgagee sales but the surprise to me has been how few there have been given the promiscuous behaviour of many investors. Most importantly, we should have already seen the fall in consumer spending as a result of foolhardy investors getting geared to the eyeballs in pursuit of getting rich quick by buying apartments, coastal sections or the like. But just as many economists kept warning about downside risk to economic growth this year when the recovery was already starting, it seems some economists continue to warn about downside risk to asset prices when recoveries are either already underway or not far off. As covered in our Housing Prospects reports we expect house prices to increase moderately over the next 6-12 months while the downward pressure on section prices should be tailing off.

Case Study Two "“ Developers, subdivisions and building activity The surge in section prices between 2003 and 2007 made new house building unaffordable (the right chart below) and contributed to the collapse in residential building activity since 2007 (right chart). However, as covered in our Building Barometer reports falling section prices are helping fuel a surge in section sales that implies a strong rebound in residential building over the next few months (left chart).

Some more developers and building firms may go bankrupt resulting in more mortgagee sales of subdivisions and sections, and further downside in section prices in some places. But the more section prices fall the more affordable new housing becomes and the stronger will be the upturn in residential building. In terms of subdivisions, falling section prices have hurt developers and in numerous cases the financial institutions involved, but in terms of economic activity the large fall in sections prices we are seeing in some parts of the country is a critical prerequisite to economic activity resuming. Obviously, the massive cut in interest rates since early 2008 has played a major part in underwriting the sharp upturn in the number of section sales we have seen so far this year, but the upturn will have been much weaker if section prices hadn't fallen. Although we can't paint the whole country with the same brush, with one developer having just put up section prices in two subdivisions in the Auckland region, reflecting an improved demand-supply balance that is in part associated with a lack of new subdivision activity thanks to the "smart" growth policies of the respective councils. The emergence of some mortgagee sales of subdivisions and developers going bankrupt or being under pressure to cut section prices isn't great news for the financiers involved. But rather than being the start of another negative shock to the economy it is the prerequisite to a strong recovery in residential building that should unfold over the next 9-12 months and play a key part in ensuring that the economic recovery becomes more broadly based. Falling asset prices will be close to bankers' hearts (yes, they do have hearts!) because asset prices and especially land prices are a key part of the security banks have over loans to developers, builders and investors. But even if banks have to write off more bad debts as a result of further mortgagee sales the negative impact of this on economic growth is smaller than the boost it will provide to residential building. Another way of looking at this issue is to consider the share prices of banks, with the share market more generally being one of the "asset values" the ANZ economists should have been focusing on especially because the share market can be a useful leading indicator of economic growth. The most pain felt by investors in banks as a result of the financial crisis and the collapse of the Australasian property boom was around six months ago. The share price of ANZ provides an apt example with it having fallen dramatically between October 2007 and late 2008, but it has recovered significantly since March (chart below), although in ANZ's latest result the NZ part of the business was where the most pain was still being felt by the bank. But it is my opinion that falling "asset values" is largely yesterday's story for NZ. 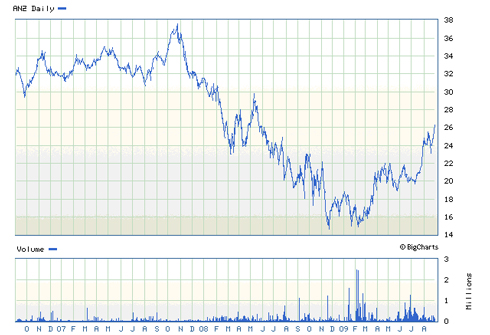 _________________ * Rodney Dickens is the Managing Director and Chief Research Officer for Strategic Risk Analysis (SRA), which is a boutique economic, industry and property research company. Rodney produces regular free reports on topical issues and on specific property markets. Find out more about SRA here and sign up to SRA's free reports here.