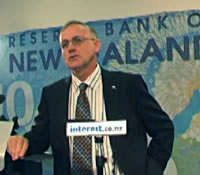 Reserve Bank Governor Alan Bollard has called on banks again to pass on lower wholesale interest rates to consumers and businesses to "play their part" in reviving the economy. Bollard issued the call as he cut the Official Cash Rate by a bigger-than-expected 150 basis points to 3.5%. "To ensure the response we are seeking, we expect financial institutions to play their part in the economic adjustment process by passing on lower wholesale interest rates to their customers," Bollard said in the statement with the rate cut. "This will help New Zealand respond flexibly," Bollard said. His comments echo criticisms last week by Federated Farmers, which accused the major Australian-owned banks of profiteering by passing only half of the recent cuts in the OCR to farmers. Federated Farmers said farm overdraft rates had only been cut to 10.4% while the OCR had been cut to 5%. Businesses have seen even smaller reductions in their base lending rates. Reserve Bank figures show the average business base rate has fallen 65 basis points to 13.25% while the OCR was cut 325 basis points to 13.25%. Later in a press conference in Wellington Bollard said he would not direct banks to set certain rates, adding: "This isn't the Muldoon era". He also argued the banks had complex balance sheets and faced increased funding costs from overseas, but it was still appropriate for them to pass on cuts in wholesale rates. What I think

This is a tricky one. Bollard is right to point out that banks are increasing their lending margins and aren't passing on most of the cuts in domestic wholesale rates to some customers. Businesses in particular, and farmers to a lesser extent, can feel justifiably frustrated that they haven't seen all the cuts reflected in their overdraft rates. Banks are, however, passing on the cuts to home buyers in the form of lower variable and fixed mortgage rates, but not to credit card borrowers. Variable mortgage rates have been cut by around 300 basis points since the middle of last year and short term fixed rates have fallen even further. But the banks would argue back that they are simply adjusting their margins to reflect the greater risk of lending to businesses in particular during the worst recession since at least the early 1990s. More businesses are likely to go bankrupt. Many farmers have overloaded on debt. Banks will have to make provisions for extra losses. There is also difficult area of access to cheap funding. In the past our banks obtained around 30-40% of their funding from overseas financial markets, which have been either shut down or have become prohibitively expensive. Banks report having to pay 150 basis points or more above baseline wholesale rates to issue longer term bank bonds, even when they are government guaranteed. On Tuesday Treasury cut the fee it charges to banks for the wholesale guarantee to 90 basis points from 140 basis to reduce that cost. This increases their overall cost of funding. It is debateable that banks are profiteering once their increased actual funding costs and the increased provisions are taken into account. However, Bollard and Federated Farmers are right to keep the pressure on. Your views?