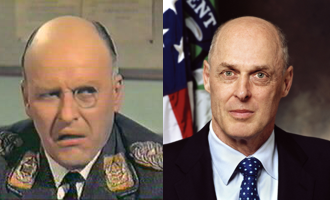 I could do with a laugh about now. Those of you born after 1975 probably won't get this. One of these men was a bumbling, deluded idiot trying to avoid being sent to the Russian front. He was regularly done over by his prisoner Colonel Hogan. The other is an investment banker worth US$600 million who tried to convince the US taxpayers to spend US$700 billion to bail out his mates on Wall St. He ended up yelling at congressional leaders in the hope they would give him the money. He has just been done over by a bunch of politicians.  One is US Treasury Secretary Henry Paulson. The other is Colonel Klink from Hogan's Heroes. Guess who is who. Thanks to Bryan and his friend Photoshop. Thanks also to Marcus Lush who connected the two this morning in our morning chat on RadioLive
Global economyCredit CrunchHenry PaulsonBig BailoutColonel KlinkHogan's Heroes