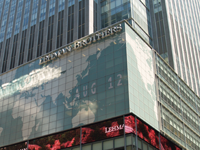 America's fourth largest investment bank Lehman Brothers is now widely expected to be put into bankruptcy protection within the next day, forcing the liquidation of its assets and raising the prospect of chaos on global financial markets when they open fully later today. The US Treasury has refused to guarantee a bailout of Lehman Bros and is prepared to let it go to the wall. It instead has tried to cajole other big US and European banks into rescuing or buying Lehman, but so far has had no success after more than two days of round-the-clock emergency meetings in New York. The other US banks are themselves short of capital and don't want to take on the risk of Lehman's toxic mortgage assets.  British bank Barclays Plc walked away from a potential takeover deal within the last two hours, leaving Lehman without a potential rescuer. Bank of America walked away earlier on Saturday.  The prospect of bankruptcy forced the International Swaps and Derivatives Association to open an unprecedented Sunday afternoon trading session on Wall St from 2pm to 4pm so counterparties to Lehman Brothers in the Credit Default Swap market could net off against each other to reduce the scale of the chaos when markets open properly on Monday morning. One fear is that a fire sale of Lehman's mortgage assets could drive prices down for such mortgage debt and create a new low point in the market, which would force other banks to "mark to market" the value of their mortgage books much lower. This would in turn set off another round of capital raisings to increase capital backing ratios. This threatens to trigger a debt death spiral that was warned about two weeks ago by PIMCO, the world's largest bond fund.  Meanwhile, the Wall St Journal is reporting that Bank of America is in talks to buy Merrill Lynch in the wake of Merill's share price meltdown late last week on what global financial chaos would do to the already weakened investment bank.  This suggests Merill's financial position is also stressed. What does this mean for us here in New Zealand? We have NZ$200 billion of foreign debt and at least NZ$60 billion of it rolls over every 90 days. Interest rates on that debt will rise if the chaos continues, as it has already done since the Credit Crunch started in mid 2007. The fixed mortgage rates charged by our banks are influenced by these international wholesale interest rates and have already risen in the last year because of the credit crunch. Only about half of the Reserve Bank's 50 basis point cut in the Official Cash Rate was passed by our biggest banks last week because of these higher international funding costs. A worsening of the Credit Crunch could provoke either a reversal of that fall in mortgage rates or prevent further cuts in the OCR being passed on quickly. The New Zealand dollar dipped almost a cent in early trade on fear that financial chaos would reduce demand for the 'carry trade', a risky play that foreign borrowers make where they borrow cheaply in Europe or Japan and invest in higher interest rate debt in New Zealand or Australia. 'Carry trade' demand often drops during period of financial turmoil.
OCRReserve BankCredit CrunchBanksUS Federal Reserve.BarclaysLehman BrosUS TreasuryBank of AmericaMerill LynchISDACDS