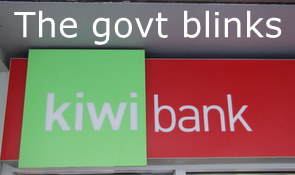 The government has backed down on its call for Kiwibank to pay dividends and will provide capital backing if needed.

The government has agreed to a request from NZ Post to provide an uncalled capital facility valued in the "low hundreds of millions" of dollars to the group to help maintain its AA- credit rating and enable subsidiary Kiwibank to expand.

(Updated with lower Kiwibank profit, full media powerpoint pack, comments from conference call on capital facility being in "low hundreds of millions" and announcement of Knowles' successor being 2-3  weeks away, also Kiwibank planning to raise a about NZ$250 million through bond issues overseas, plus news conference quotes from Brian Roche and Sam Knowles.)

Finance Minister Bill English and SOEs Minister Simon Power said the move followed a request from the NZ Post board for support from shareholding Ministers to enable the company to preserve its credit rating while Kiwibank continues with its current growth-focused business plan.

"We're confident this provision of uncalled capital, on commercial terms, will give NZ Post and Kiwibank the financial certainty they need to pursue their plans," English said.

English and Power said the move sat alongside other government measures such as allowing Kiwibank to retain profits and requiring a lower dividend from NZ Post. The exact size of the facility will be reviewed over time in line with the needs of NZ Post.

NZ Post will be able to call on the capital only in certain defined circumstances, such as Kiwibank experiencing a substantial shock event beyond its own resources and beyond the resources of its parent.

NZ Post said the uncalled capital was a vital plank in maintaining an AA- credit rating with international credit rating agency Standard & Poor’s that enables it to compete with Australian owned rivals ANZ, ASB, BNZ and Westpac. S&P rates both NZ Post and Kiwibank AA- with a stable outlook.

“That rating is required if Kiwibank is to continue to grow and expand,” it said.

Amount not agreed yet

English and Power said the uncalled capital provided stakeholders with the assurance the government was providing the financial support the NZ Post Group required, while maintaining a prudent approach to injecting new equity into Crown companies.

In a news conference NZ Post CEO Brian Roche said the final detail of much the backstop facility would be was still being worked through with the government.

"But it is in the low hundreds of millions. We think that’s going to be sufficient. We’ll continue to work with the government on the facility over time," said Roche.

Kiwibank's soon to depart CEO Sam Knowles said the credit rating would have come under threat over time if Kiwibank continues to grow at its current level. There hadn't been an immediate threat of a credit rating downgrade.

"The rating agency would’ve said 'do you have enough shareholder support to continue that growth'?" Said Knowles.

Roche said NZ Post wanted Kiwibank to expand into new sectors such as business banking. He said the group didn’t require a direct capital injection from the government and Kiwibank had sufficient capital for immediate growth plans, aided by the raising of NZ$150 million of tier 1 capital through a preference share issue earlier this year. Roche said the money couldn’t be called on for support in circumstances such as cyclical deterioration of earnings or to fund growth activities.

NZ Post was working with the Crown Ownership Monitoring Unit (COMU) to finalise the terms and conditions under which the facility will be provided. It could only be used in an external event beyond the control or resources of Kiwibank and the New Zealand Post Group.

“The recent Global Financial Crisis has highlighted the need for groups active in financial services to have various mechanisms in place that can be accessed in the event of shock events,” NZ Post said.

“Uncalled capital is one such mechanism that is not the final answer to shareholder support, but one that provides a degree of certainty and timeliness in the group’s ability to respond rapidly to potential issues.”

Knowles said the results were “solid and consistent with a tough environment”.

He said the bank had emerged from the world recession in strong shape and was on track to increase profit over the coming year. In the last year, Kiwibank increased lending by 23% to NZ$10.4 billion while increasing retail deposits by 3% to NZ$6.9 billion. It said only 0.3% of loans were impaired.

Knowles said the bank’s performance was affected by very strong competition in the domestic retail deposit market with both the amounts deposited and margins affected.

Knowles said the deposit market had been affected by the Reserve Bank’s core funding ratio requirements. Banks must secure 65% of their funding from domestic deposits and bonds with terms of more than one year. This led to the Australian-owned banks competing more vigorously for deposits in the New Zealand market.

During the year Kiwibank raised $A250 million ($NZ309 million) through a bond issue and NZ$150 million of Tier 1 capital through a share issue by a related company, Kiwi Capital Securities Ltd.

In May Knowles announced he would resign from the bank once a replacement was found. The announcement of a replacement had been expected this week, but there has not been an announcement with this result or the capital support news.

Meanwhile NZ Post CEO Brian Roche later told a news conference the uncalled capital facility would be valued in the "low hundreds of millions" of dollars and that a successor for Knowles would be named in the next two to three weeks.

Meanwhile, Knowles told the conference Kiwibank planned to raise about another NZ$250 million overseas through a range of loan facilities and bond issues.

Your views? Comments below please.

Pfft, this government doesn't need your fancy "invisible hand". It has a big clumsy fist it can poke into things. We're fine, now get back to work.

So TSB will be annoucing a similar news release soon?

Updated with media pack attached and detail from Gareth reporting on the news conference call going on at the moment.

Includes Knowles saying Kiwibank plans  new overseas bond issues of NZ$250 million and Roche saying the government backstop is likely to be in the 'low hundreds of millions.

Also Knowles' successor likely to be announced in the next two to three weeks.

What you are witnessing is the financing of a spring offensive to be carried out by Kiwibank into the residential mortgage market....the aim of the govt is to pork activity long enuff for them to get passed the election. Expect follow up measures by Cabinet to further boost the govt loans to first home buyers. It amounts to a scam ...it is not about encouraging lending into export sector enterprise, but just good old fashioned manipulation of the voting public. The tide has gone out and we can see,not a member of the govt is wearing a bloody thing.

FYI, I have updated the story again, adding quotes from Brian Roche and Sam Knowles made at a media conference.

Nice touch throwing Ghandis cloak over the Aussie Banks. They didn't follow their overseas counterparts down the road to perdition is beacause they were a cosy protected cartel whose  margins were so good due to lack of competition they were not impelled to seek risky investements such as CDO's. Quietly thank our lucky stars they were not under revenue pressure to emulate their offshore colleagues, thank prudential oversight preventing them from doing so but please don't attribute their survival to  ' model corporate citizen' attributes. If they were in the shoes of their Yankee or Brit cousins they'd have done exactly the same.

NZIER economist NZIER economist Shamubeel Eaqub said  "For investors ... current rents do not stack up. Either rents have to go up or house prices have to fall," he said. "We do not believe there is much room for significant rental increases. Instead, frothy house prices may adjust lower."herald  herald

Or in simple words....the property bubble is dying fast. If you are thinking of selling, don't be last!

For the savers out there who waited out the stupid times...do not rush in because bubbles always correct back to below the averages. Expect 2002 prices to be reached sometime over the next decade. The declines will vary across the country and locations for obvious reasons. Carry on saving. Do not be put off by the waves of BS coming from the RE mob, the banks and the media.

You are now the market. They want your munny.

Possibly anon...hard to know. Why would you want to know?

Oh I see...you are appointing yourself as moderator...a sort of self styled boss on the thread...you must need to replace your hat quite often!

The answers to your questions are personal and not for posting on a public thread, especially with so many nasty little shites out there.

Suffice to say I do not need to work and have not been employed since the age of 52...but I enjoy a healthy nett income and I am pleased for any others who bought into pna when it was in the low 40s, although I did suggest they sell now before the Fed arranges another market gut spewing event for the benefit of the us$.

You may take whatever you wish from my comments on property. I couldn't give a rat's arse!

As I expected, the fools in the Cabinet have decided to run with a policy of porking the bubble to win the election instead of acting to promote affordable homes and bring long term stability to the economy.

"Several hundred million dollars of new capital will be put on standby for the Kiwibank in the case of severe shock that neither the bank nor its parent New Zealand Post can cover.

The capital should bolster Kiwibank's credit rating and make it easier to borrow offshore.

Chief executive Sam Knowles says up to $500 million of new overseas borrowing is planned to support new lending to customers.

A spokesperson for financial website goodreturns.co.nz, Philip Macalister, says the move should increase competition in the home loan market and lower interest rates."

The next Cabinet move will be to boost once again the welcome home to greater debt loans in an effort to pork some activity in the building sector.

This economy already has an Elephant sized mortgage debt squashing the life out of it. Now we have the idiots in wgtn moving to boost that level of debt for short term electoral gains.

Is this the start of National taking over KiwiBank ?