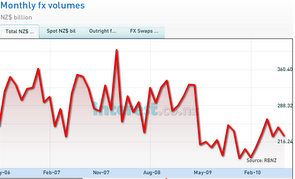 NZ$ currency trading is down 31% in the last 3 years as banks use 'hot' money markets less to fund their lending.

The free floating and free trading New Zealand dollar is still punching well above its weight in international currency markets.

It is the world's 10th most traded currency despite being just the 28th largest economy in the OECD, which does not include China, India, Brazil or Russia.

That's despite a 31% drop in volume over the last three years as New Zealand bank borrowing from 'hot' wholesale financial markets has slumped in the wake of the Global Financial Crisis.

The New Zealand dollar was the world's 10th most traded in the world in 2010 with an average 1.6% of total daily turnover, a Bank of Institutional Settlements (BIS) survey of global currency trading has found. The full spreadsheet of currency trading stats is attached here.

The report (table 3) shows New Zealand's ranking is up from 11th in the last triennial BIS survey in 2007, when New Zealand was behind Norway on 10th. Back in 2007 New Zealand dollar turnover represented 1.9% of the total.

The New Zealand part of the survey included data from the five major banks participating in the wholesale financial market.

Punching above our weight, but not as much as Australia

The report showed however that the economy and foreign exchange market that punched the most above its weight was Australia, which generated daily foreign exchange turnover of US$192.1 billion or 23% of annual GDP. It jumped up the rankings to be the fifth most traded currency in the world behind the US dollar, the Euro, the Yen and Pound Sterling. It is now more traded than the Swiss Franc, the Canadian dollar, the Hong Kong dollar and the Swedish Krona.

The BIS preliminary global report can be found here

That’s because our currency is “The Cork in the Ocean” never stable - up and down on a weekly base sometimes in heavy sea.

Wooohooo CASINO Pacifico ..  do we get free drinks when gambling?

Have you seen this?

Have now. Great stuff. All too true.

The beast grows fat with consumption...never sated..........swallowing all before it.

And this is a good thing? Punching above our weight or just being pushed around?

Struggling with the new system, iPad and restricted mobility.

I am surprised to see how much the forex trade has grown. The last time I saw the figures it was arround three trillion a day, surely the most liquid market together  with bonds.

Les Rudd if you are arround there is an interesting figure for your trading book: 8.3% of annual PGB, not 43%.... ops.

I wanted you to more concretely justify this statement:

"If you see who are the largest traders in the NZ dollar you will find that exporters hedging against currency swings are the number one users. Speculators are  few and they do not account for much of the movements in the currency  they carry very little weight  if any at all."

So at 8.3% gdp per day, (which fits better with your open interest points, thanks) that means NZD gets it's gdp traded about every 12.5 days, or approx 20 times it's gdp per annum. If exports are not more than say 33% of gdp, that's 60 times exports per annum! Sure it's better than a work thro' with the 43% figure, but it's still bad enough, in my view. Allied to being 10th most traded, while being only the 28th largest* OECD economy*, seems a wee bit odd to me - if it's all NZ exporters fault! (Your claim above.)

Pesky blighters. Does it mean that after a hard day exporting they whizz off home for a bowl of gruel and then spend all night spot fx trading?

So, is all that volatility really exporters fault?

Kin, the largest KIWI traders are within the NZ financial System... they are the KIWI

Here we go again. Poor ole Aussie Banks. Get some books down y' pants lads your'e in for a caning, by the look of this comment.

Michael, why ever would they? C'mon - they are on our side. Just look at those fx briefs that get posted on here every morning by the BNZ 'Exporters Help Team' - to help NZ exporters, duh!

C'mon, don't pick on the banks, they are always getting bagged on this site - after PIs, RE's, rorting MPs, SCF, SCF and SCF. Just ask Woally.

Is that the best response you could muster Michael........there are a number of events building that will see the ass drop out of the appetite for the Kiwi.......... hope the banter remains good natured post that event..........boy genius.

New Zealand ranks in the 50s in terms of global GDP.  New Zealand is right up there in terms of predictability, vanilla monetary policy and the like - is it any surprise the currency is traded to detrement of the real economy to the benefit of ....