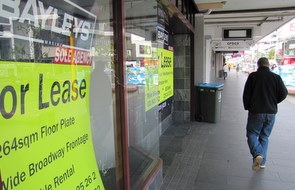 Walk down Newmarket's broadway on a rainy day and the impression is not of prosperity.

For Lease signs plaster empty shopfronts, while those still in business offer 50% off or more to entice passing pedestrians.

It is a mood of desperation that the NZ Herald picked up on in an article last month titled 'Fashion capital' loses its shine as sales dwindle.

Consumers are being cautious as the economy recovers, repaying debt and avoiding non-essential spending. Flat consumer spending the June quarter depressed GDP growth to 0.2% and weak retail sales in recent months have been a factor in the Reserve Bank's decision last week to dramatically reduce its economic growth and interest rate outlook. Deleveraging is dragging on the retailing sector in a way many had not expected.

A survey of businesses by interest.co.nz on Broadway's Eastern side from Railway St in the North to just past Remeura Rd in the South showed a patchy recovery in spending and a change to transitory shops selling goods cheaply through short term leases. Some shop keepers in what has previously been seen as the ritziest shopping district in the country expressed concern that the short term and heavily discounted 'Popup' shops were lowering the tone of the neighbourhood. Newmarket is renowned for its designer fashion, shoes, cosmetics and consumer electronics stores.

Of the 37 retail shops spoken to, six said their businesses were doing very well, and a further 13 said sales were beginning to pick up again.

Six businesses could not identify an overall trend because their sales fluctuated wildly from week to week.

Ten stores said sales were as bad as this time last year, and two said business had never been so bad.

Twelve stores were empty. Five of those had been leased out to new tenants.

Three stores were having closing down sales, but all said they were motivated by the end of short term leases or overseas moves.

Eight stores had sales advertised on their storefronts, but six of those said the sales were routine. One of the shops on eastern side of Newmarket was a type of $2 shop selling cheap trinkets, toys and other plastic pleasures.

'Work harder and be smarter'

Of the 19 stores who said sales were good or improving, they credited their niche and/or quality products and the successful fostering of a loyal customer base.

Interest.co.nz waited ten minutes to speak with Liza Shieff, the owner of Be Ba Bo European toy shop, while she gift-wrapped a purchase for a customer.

She said her shop was doing "fine" one year after opening, and it was important to treat customers well.

"You need to look after them in a recession, and they'll come back," she said.

Manager of Modes women's fashion store, Diane Stevenson, said her store had been in Newmarket for 26 years and had to "work harder and be smarter" to maintain their sales, despite a loyal customer base.

The store has diversified its product, works hard to promote and advertise itself, and went the extra distance for customers by providing services like alterations, she said.

Next door at Modes' outlet store, Manager Jennifer Moody said she has worked off and on in Newmarket for 22 years and the precinct was changing.

"The basic retailers are still here and trading well, but there are plenty of empty shops too. Rents are a big killer, they haven't been adjusted to reflect the slower period" she said.

Her own shop is on a temporary lease, but the premises have been up for sale since February.

The owner of clothing store Menon, Praveen Menon, said sales were up on last year and established stores were not in danger of closure.

"The ones that are struggling are the temporary or low quality stores. People come to Newmarket come for the quality," he said.

Owner of shoe store Euro Brands Carl Webb said the 'Closing Down' signs on his storefront reflected the end of his temporary tenancy rather than the failure of a permanent store.

He said there was a high turn-over of temporary 'pop up' shops in Newmarket because of low sales and "prohibitive" rents.

"There'll be a lease for 2 to 3 years, then a store will be vacant. And landlords will give short-term leases to cover some of their costs in the short term," he said.

The owner of fashion retailer Fio, another store with a 50% off Closing Down sale, said business was "not too bad and getting better" but the store was closing as her husband was moving to China.

The Manager of clothing store Mark Richard, who did not want to be named, said temporary stores put pressure on permanent retailers margins.

"They bulk buy a bunch of stock from Asia, and then aggressively push it with huge discounts until it runs out. Then their lease ends and they leave," he said.

While many of the closing down sales and empty storefronts are the result of short term leases ending, other retailers are hurting too.

Shop Assistant at Lush cosmetics, Sian Thorburn, said sales for the store halved after it moved premises from the 277 shopping mall to Broadway.

Like other stores spoken to, Thorburn said their sales had inexplicably fluctuated.

"July and August were amazing for sales, and now they're the worst ever. There's no method to the madness," she said.

A majority of retailers spoken to said they hoped the onset of Summer would bring more foot traffic to the precinct and stronger sales.

yep walk through here everyday, been in the dumps for months

The economists should walk the streets more often

I work with a number of small retailers and most of them aren't putting up their prices on October 1st.

Times are tough and they are wearing the cost of the gst rise themselves rather than pass on to customers which won't be good for their profitability.

Perhaps this may be why there hasn't been a rush to purchase before the gst increase because consumers know many stores will be holding prices as times are tough.

Prices will be increased in the supermarkets of course as they have a captive audience who need to buy food etc but those selling discretionary items aren't so fortunate.

About three months ago in Pakuranga/Botany, I noticed that the Warehouse, Dick Smiths and K-Mart all rearranged the deckchairs...er, no...shelves in their stores to drastically reduce the stock they held. All those shops now appear far more capacious than previously.

It is the way of recessions in Noddy...think back to the late 80s...that blow went on into the 90s...this time it's different...this is a 'rotting economic fiasco'....it is not cyclical...the whole economy was built on property splurging credit pumped stupidity supported by a fathead Labour govt.

Do not be surprised at this ongoing recession...this is how it will be for a long long time and you have to get you head round that. The export lead recovery that English is praying for...is smoke.

The exodus to Aus will grow stronger. The building boom in chch will be mostly hype and spin. The spring storm GDP pain will be tucked away out of sight! The Cabinet has taken two years to realise the seriousness of this worldwide economic bloody stuffup...so finally they begin the task of slashing the spending...cutting back Helen's bloated civil service.

Meanwhile Labour's promising machine gathers pace ready to offer anything and everything to the voters in 2011. They will promise to return Noddy to a property splurging stupidity...to more debt...more misery....more taxes....more jobs for Labour flunkies.

The economy is going to splutter along the next two years. Don't agree with Wolly's pessimism, but nor do I think it will be much more than a 2% per annum growth scenario over the next couple of years

Anemic Growth is what will occur

I think things will get brighter in 2012, 2011 will be much like this year maybe a bit brighter due to the world cup

some sectors wil be better than others. Retail and construction / housing is going to face another tough year in 2011

yes well i noticed that a big retailer in hamilton had moved its back wall closer to the front door - so the shop was still packed full of goods, but would look pretty barren if that same stock was over the entire original floor plan - nice trick....

actually, i think Wally?Wollys summation is ,unfortunately about right.

if Labour or Winston Peters ever get back in with their " me- first" bloated old-world retail politics.. I'm going to move to Thailand, buy a Hello Kitty scooter and open another burger chain with LingLIng and the troops!

Think I might call it " the New Normal Takeaways?"

Come on over , buddy , the water is warm , and the beach uncrowded . Occassionally stunning little nymphets wander past and say " hi Joe " ......... and some of them are women !

but you're in the Phils. aren't you.. O great white hero.. aka the gummy one?