Economic recovery has reversed, meaning next OCR hike will be in June 2011, NZIER says

Economic recovery has reversed, meaning next OCR hike will be in June 2011, NZIER says 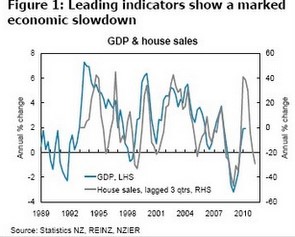 Economists are beginning to pick June for the Reserve Bank of New Zealand's first hike in the Official Cash Rate due to a weak recovery and falling inflation expectations against the backdrop of rising turbulence in global markets.

The New Zealand Institute of Economic Research (NZIER) this morning said it now expected the first rate hike to be June 11, following yesterday's announcement from ANZ National economists that they had pushed back their timing until the second quarter next year.

"Critical indicators like house sales and QSBO (Quarterly Survey of Business Opinion) domestic trading activity point to a slow finish to the year, even without the destruction and disruption of the Canterbury earthquake in early September. A double dip recession cannot be ruled out, but it is not our central scenario. Instead, we expect weak activity over coming months, before a more sustained recovery from mid 2011,” Eaqub said.

A slow housing market was set to take its toll on economic growth, with current house sales numbers suggesting growth will slow sharply in late 2010 and early 2011, he said.

Meanwhile BNZ economists have also said the next OCR hike could be pushed back to June following a decline in inflation expectations in yesterday's National Bank Business Outlook.

"The RBNZ will take some comfort from the inflation signals dimming a touch," BNZ economist Doug Steel said.

"The indicators are certainly not calling for any immediate action from the Bank. We currently have next March pencilled in for the next upward nudge to the OCR. But, given the wider economic developments (think subdued property market, risks to agricultural production, and renewed global economic growth concerns) there is a growing risk that the next OCR hike may well be later than currently anticipated," Steel said.

Here is the release from NZIER:

“The economic recovery has reversed. We expect wintry economic conditions this summer. Critical indicators like house sales and QSBO domestic trading activity point to a slow finish to the year, even without the destruction and disruption of the Canterbury earthquake in early September. A double dip recession cannot be ruled out, but it is not our central scenario. Instead, we expect weak activity over coming months, before a more sustained recovery from mid 2011,” NZIER’s Principal Economist Shamubeel Eaqub said.

The details are in NZIER’s December 2010 Quarterly Predictions – a comprehensive and independent commentary on the New Zealand economy and forecasts covering the next five years. Details and insights are available exclusively to NZIER members.

The growth hiccup, distant inflationary pressures and escalating global risks mean the RBNZ will hold the OCR steady for longer. We expect the first OCR increase in June 2011.

We expect economic growth to recover from 1.7% in 2010 to 2.3% and 2.9% in 2011 and 2012 calendar years respectively. The recovery will be shallow and volatile. The Canterbury earthquake will weigh on growth in late 2010, but boost GDP growth next year as reconstruction begins and the regional economy reverts to more normal spending patterns.

Global outlook is full of risks

Global risks have escalated in recent months as the fallout from the Global Financial Crisis (GFC) continues.

Quantitative easing, fiscal austerity and bail outs are prevalent. The solution to the GFC is less spending and more saving. This will hurt the demand for our exports: 41% of New Zealand’s exports go to countries with public debt in excess of 50% of GDP.

Global currency wars will affect the New Zealand Dollar, which will remain elevated for some time. The policy options for managing this appreciation are very limited and could cause more harm than good.

Businesses will do it tough

Businesses should plan for a shallow economic recovery. Economic activity will be weak through late 2010 and early 2011, but we expect a more sustainable and broad based recovery from mid 2011. For businesses with tight capacity this is the time to invest; to capitalise on a more sustainable recovery from mid 2011. For those with excess capacity, it will be a case of prudent risk management in the soft patch.

A grim outlook from house sales

Figure 2 also taken from Quarterly Predictions. The grey line shows our baseline construction forecasts and the blue area shows the impact of the Canterbury earthquake, some initial displacement of previously planned work and reconstruction from early 2011. The Canterbury construction will partly offset weakness in the sector.

Morning Alex.....A great sub header would have been ...The Bullshite Stops Here.....confirming noises out of the RBNZ of late coupled with Billy Bobs little rant.....this was always where the dots were taking us.......do keep at em ...there's more to come..... by February I would expect the word GRIM to enter the rhetoric.

The fascination.. ? ..the journey is so predictable while the destination remains a mystery..!

Yields on 10-year Italian bonds jumped 21 points to 4.61pc, threatening to shift the crisis to a new level. Italy's public debt is over €2 trillion, the world's third-largest after the US and Japan.

"The EU rescue fund cannot handle Spain, let alone Italy," said Charles Dumas, from Lombard Street Research. "We we may be nearing the point where Germany has to decide whether it is willing take on a burden six times the size of East Germany, or let some countries go."

French lenders have $476bn of exposure to Italian debt, according to the Bank for International Settlements.

Every time I think the EU has issued to most ridiculous statement ever, they outdo themselves. Today I read that Ireland will pay back its $100bn loan in ten years. Pardon, ten?

Or maybe the money is going to come out of the Irish boom. Wait, the economy has shrunk by 15%. Or pensions, no, they are only $20bn

In other news, I read that German Banks have "sharply reduced" their exposure to PIIGS debt. No wonder.

And an amusing sidelight. One very large US Bond dealer quietly transferred the trading of PIIGS Euro Bonds from its sovereign desk to its "distressed assets" desk. Europe is now Joe's Garage and Tea Shoppe.

Bring back the Monty Python show - there was more reality to it than the current EMU debacle.

A final smash-down run on the Euro is underway as every German, Frenchman, Italian, Spaniard, Portuguese and their companies, with some capital to preserve, exchanges their Euro denominated cash accounts into Canadian, Australian or US dollars, or Japanese Yen, British pounds - indeed virtually anything as long as it is outside the Euro area.

And let us not forget the speculators who smell a once-in-a-lifetime windfall spectacular.

The liquidity in Euro area banks is evaporating as we write.

This is a wall of escaping money that no government can stem.

There is no way back from here for the Euro

The govts everywhere have lied like buggery for so long to so many about so much that not a sod believes any of them any more. The Irish will blow the banks to pieces and those holding piigs bonds will not take a haircut..they will be scalped. That means massive losses for most of the banks in europe....good luck sorting that shit out.

The Fed will carry on up the QE creek and the US toilet paper is set go down the dunny.

Noddyland is going nowhere fast but the banks are sucking hundreds of millions from the economy thanks to those idiots Clark and Cullen.....oh and the current lot too......

Beijing is in a pickle having lost face over calling our dear leader a jumped up little fart...not those words but that's what they were thinking....and they have a money bubble to deal with...

The aussies also have a bubble but the crowds are being told there is nothing to see and they should move along.......

Barry Obama is a bit late to the game and has started to boot the crap out of the unions...he has a long way to go.

Meanwhile the families in Noddy continue to be farmed by the banks thanks a good deal to govt policy.