Budget 2011 may well be themed on savings and investment, PM John Key says

Budget 2011 may well be themed on savings and investment, PM John Key says 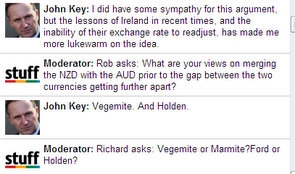 The government's 2011 budget may well have a theme around savings and investment, Prime Minister John Key said on a live Stuff chat this afternoon.

'Savings and investment' has been a hot economic topic in New Zealand this year, with the government-appointed Savings Working group due to report back to the government in January, ahead of the Budget in May 2011.

Support has been building in recent weeks for a tax break on the inflation component of interest earned on deposits, with Treasury, the Reserve Bank and Inland Revenue all backing the idea.

In other comments Key said the situation in Ireland, which uses the Euro currency, had made him go "lukewarm" on the idea of a combined New Zealand and Australian dollar due to Ireland's inability for its exchange rate to adjust.

Asked what National's agenda would be for the next 12 months prior to the election, and what could be expected in a second term, Key said: "it will be dominated by Budget 2011, which may well have a theme around savings and investment. Along with responding to the Welfare Working Group recommendations, and a number of other initiatives we're working on."

"There are a number of initiatives we took off the table for the 2011 election period, so we'll need to decide what we do there. The example of a policy where we were clear in our first term, is minority asset sales, and we'll need to make a decision on where we want to be with that," he said.

Asked "what are your policies that you will be putting in place for student loan repayments?", Key said zero percent loans will remain.

"The eligibility criteria have already been modified, and the Minister will continue to look to see if there are any other loopholes that need fixing," Key said.

Asked "What sort of policies do you intend to put in place to close the difference in salaries between NZ and Australia and attract NZ workers in Australia (like me) back to NZ?"

Key said, "It's very early days, but since September 2008 to today, NZ's real after tax wages have risen by 8% and in the corresponding timeframe, Australia's have risen by 5%. That said, the wage gap widened over a 40 year period and cannot be narrowed easily. We need to understand the enormity of the task."

"Fundamental to this question is the improvement of productivity rates in NZ, which is why the Govt undertook tax reform, industrial relations changes, infrastructure building, and a general upskilling of the economy," Key said.

"Our analysis shows that Australian firms are continuing to deploy significantly more capital in their business than NZ - and that's an issue we need to consider," he said.

Asked: “According to your tax cut website, your personal tax cuts from the October 1 'tax swap' are $12,600 a year on your PM salary alone. How is borrowing that money to give you a tax cut adding value to New Zealand?”

“Firstly to raise enough revenue to pay for the govt's spending requirements, and secondly to put in place the right incentives for people to work and generate investment. By lowering our personal taxes, we are not only narrowing the wage gap between NZ and Australia, but we have re-weighted the investment proposition in New Zealand's favour,” Key said.

“It may be true at the moment that the Govt is borrowing to fund its deficit for a variety of factors, but that's not always the case,” he said.

Asked “There are lots of reports about the cost of living in NZ, compared to other countries e.g. power, phone. What are your thoughts on this?”

Key said: “The best indication of price increases is the overall inflation rate, which is currently running at 1.5%, or about a third of the rate of inflation that was in place when Labour left office.”

Asked: “What are your views on merging the NZD with the AUD prior to the gap between the two currencies getting further apart?”

Key said: “I did have some sympathy for this argument, but the lessons of Ireland in recent times, and the inability of their exchange rate to readjust, has made me more lukewarm on the idea.”

Asked: “As [an] ex foreign exchange trader, what in your opinion on the sustainablity of the Kiwi $ US $ at current spot range 73.78?”

Key said: "My guess is it will trade between 68c and 78c in the next four months. Hope this helps!"

Asked: Will the national government ever consider the total sale of any public assets?

Key said: “We're not planning total sales, and have yet to conclude whether we might entertain the idea of partial floats.”

Asked: With inflation running at 1.5%, how do you explain the food prices increasing at over 60% over 5 years?

The live chat has now ended. See all of Key's comments (ie on non-economic issues) here.

Savings could apply to peasants and govt...!

Investment could mean an end to the landlord benefit system.....!

I see no mention of any effort to see an end to the property ponzi game.....without that, there will be no investments because the banks are sucking up the income and/or the landlords are creaming the rent and diving straight back into more property.....

I appears the only thing national wants to 'save', is its arse at the next elections.

Have included questions and answers of the economic-themed questions.

Wow, Jonkey is the national party master of spin..  I take my hat off to him in that respect.  Its a shame that the voting public at large can't see through all the B.S.

Why could Key not have been asked to explain why govt policy continues to support property remaining seriously unaffordable?

and if he side stepped the question...ask him if the rent subsidy given to tenants and passed on to landlords is not holding rents high and encouraging landlords to buy more renters, thus holding up property prices!

and before he can leap past that one....ask him if landlords are being encouraged to buy properties when they can deduct interest off their taxable income.

Key has yet to say boo about property being seriously unaffordable....he has yet to say he thinks savings would increase if rents and mortgage payments were lower.....why it this?

For a two bit nation in the arse end of the South Pacific that's just been listed as one of the most externally indebted per capita nations on earth along with Oz and Spain - these proposals don't look like reversing the trend today of borrow and pray.

He's reverted to form - just another pollie hell bent on re-election - we'll make it up when were back in power just as we did with the ETS  and Foreshore & Seabed.

Property is not that expensive, outside of a few places, in NZ. Wolly the world has changed, women actually go to work in large numbers these days, they are even a majority at universities. So no point in costing price of a property on one income,in the real world there are usually 2 incomes buying and servicing the property.  Yes, I realise the world might be a better place if women had stayed in the kitchen and families had just the one income and house costs reflected this, but the horse has long bolted, old mate. And actually the relative price of household appliances, cars etc are way cheaper these days to once upon a time. You seem to have a particular hobby horse and I appreciate you are too practised a rider to get you to dismount, but to compare a house price to one breadwinner's income is not the way things operate in this day and age.

Women always have worked, muzza! That's the problem with the blow out in the ratio. When I bought my first home in '75,  we both had to work to get the 30% deposit and then the repayments were worked out on the expectation of a family, at 33% of my wage. So it's a furrfy to say the "now women work" etc. The change is soley as a result of the provision of more credit ( well, debt, actually!)

"You seem to have a particular hobby horse..." says one of the last remaining die-hard property spruikers posting at interest.co.nz!

Think you will find Nicholas that women in the workforce took off in the 70's- but things didn't take off then due to the oil shocks.  In the 80's things started to rock and roll but the cash from double incomes chased the stock market.  Now I am old enough to recall that, I felt a bit strange then as I bought property rather than buying up shares.  After '87stock market crash, it's no wonder that many looked at property .  Yes, credit more freely available, but dual income yuppies started working out they could service much bigger loans, hence rise in prices took hold big time since about turn of the century. At end of day prices tend to reflect what people can service loans on dual incomes, that's the world we live in now. And outside a few areas, prices are actually not all that expensive in NZ, unless one still insists on relating it to a single income situation.

Actually, women in the workforce took hold during/after WW2, as the men went off to do their bit, and the girls didn't want to relinquish what they had discovered ~ financial and social freedom!. ( Where does the word 'jeans' for denim trousers come from? )But that's an aside. And here's the thing. Property was the go; it isn't any longer. Those that took advantage of the last 30 odd years~ and got out~ are the winners. Those that remain 'in'; or get in now, will be the losers.

Life is going to be more expensive, especially food prices have the potential to increase rapidly.

The nation will struggle to pay bills with the consequence for the NZmajority of a lower standard of living or worse.

National’s neglect of the middle class/ working class and mismanagement of our economy could bring a change in government again.

No end of our “Patchwork Economy" in sight – sad really.

I would like to know what John Key believes money really is. I look at my plastic bank card and say "this is my money, I can't see it, can't smell it, cant taste it, can't hear it, can't touch it, it is nothing and yet it can be created from nothing (FED reserve). When this nothing is created from nothing it can bail out whole countries and much more. Clearly those who believe in god are right, he is right here on earth, creating nothing out of nothing and doing wonderful things with it.