Treasury is forecasting government will return its books to surplus in the 2014/15 year, with net public debt hitting a peak of 29.6% of GDP in 2015. Most commentators have labeled the forecasts, which also predict wage growth will be about 2% above inflation over the next three years, as optimistic, although the government has come out in defence of Treasury's predictions.

Barclays Capital economists calculated the average error in Treasury forecasts over the past five and ten year periods, with calculations showing the debt track could be worse than expected, and in line with more pessamistic Reserve Bank forecasts.

"Applying the 10-year average forecast error results in a sovereign debt load as a % of GDP of c.38% by 2015, while the 5-year average error produces nearly 42%. These estimates are in line with the latest's RBNZ's estimation," they said. 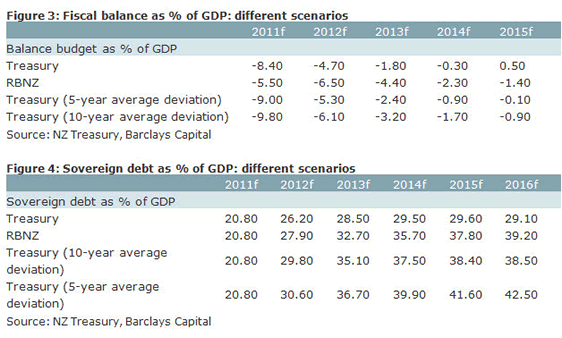 The Barclays economists also charted Treasury's government fiscal balance and GDP forecasts with the results, saying Treasury had underestimated surpluses, but had been too optimistic on deficits:

“There has been some commentary about the Treasury’s budget forecasts for jobs and growth, suggesting they are too optimistic. Treasury’s independent forecasts are in the pack of other forecasts. In fact, a number of them have described the budget forecasts as conservative," Key said at his post-cabinet media conference on Monday.

"If I was just to have a look briefly at the forecast comparisons that other banks have got, ANZ says: ‘We think the Treasury has been a bit conservative in this regard, and we see upside risk to the tax revenue numbers’; BNZ says: ‘Can we thus get the growth forecasts by Treasury needed to achieve the revenue objectives? – the answer, probably. Our forecasts for economic growth are not significantly different to Treasury’.

I actually think Treasury's GDP forecast's are viable (although I think 1.8% this year is somewhat high - I'd expect closer to 1%). 4% for the next year with the ChCh rebuild seems reasonable.

So it seems you can more accurately calculate growth by first calculating how wrong Treasury is.

When NZ talks about growth they talk about a low NZD vs. the AUD. but that is changing by the hour and the export led recovery will lose momentum. I can imagine why Mr English is already talking the NZD down, but the market does not want to hear him.

The budget is all about AUD strength. So it can fizzle in a blink

Would you agree.... nowhere.

Even talking about core inflation (instead fof CPI) at 3% as opposed to <2% isnt hyper-inflation territory by a long stretch.

Personally I think JK is selling us a pig in a poke....sadly I suspect enough will fall for it (unless ACT starts to do very well and voters run) to see a National second term and then we get shafted...3rd term? cant see it.....I expect JK etc will do a lot of swinging the the right "dragged" [not]-kicking and screaming by ACT.

Steven - I agree with your prediction. The "optimistic" economic predictions will not be fulfilled, sometime in their second term National will then be "forced" to make unpopular cuts (especially when ACT led by Brash are part of their govt, with circa 6-7% of the vote) , then they'll get thrown out, especially if there is a more inspiring alternative to Goff by then

Barclays's analysis has merit but like the Treasury advice ignores or discounts the impact of rising oil prices causing lower GDP, and higher inflation and unemployment.

Unlike a UK government report obtained by The Times which projects a drop in UK GDP of 1.7% for 2 consecutive years compared to baseline assumptions, higher inflation and unemployment if oil prices rise by 102% (already 50% above Oct 2010 levels)

there is a very oily elephant in the room.

Now assuming that the market is always correct, it is sending a clear massage that NZ rates are going higher, they are being priced in and it is a bit expensive to be wrong this market.

It's expensive to be wrong in any market, michael :) And what makes a market? Different points of view.....

Nicholas,  I am in the same page,