NZIER warns on NZ's rotting fiscal core; Says NZ could end up like Greece, US in 10-15 years as deficit & debt balloons as population ages

NZIER warns on NZ's rotting fiscal core; Says NZ could end up like Greece, US in 10-15 years as deficit & debt balloons as population ages 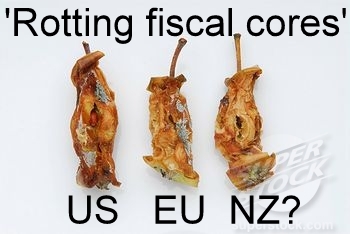 New Zealand's fiscal core is rotting just like in Greece and the US as the government faces ballooning deficits due to an aging population, while there is no political will to tackle the problem, the New Zealand Institute of Economic Research (NZIER) says.

Inaction now to provide for exponentially rising healthcare and superannuation costs would see New Zealand being forced to undertake the unpalatable decisions currently faced by Eurozone and US governments in 15 years time, NZIER CEO Jean-Pierre de Raad said in and op-ed piece in today's Dominion Post.

Meanwhile, de Raad's chief economist, Shamubeel Eaqub warned on Saturday that although New Zealand was not at a crisis point yet, it would be dealing with its own big challenges in 10 years' time as government spending blows out to American levels due to those costs.

Market participants and the government say relatively low government debt, a track to surplus within two to three years, and policies to make NZ companies more competitive, will ensure the economy comes out of the global financial crisis on a sound footing for export-led growth.

But although New Zealand was looking relatively strong at present, its fiscal core was "rotting just like in the US and Greece," de Raad said. The economy here was looking in better shape than the US or in Europe, if one chose to not look too far ahead.

"Our newfound illusion of fiscal restraint must not derail the necessary debate on how we tackle the unsustainable health and superannuation costs of an ageing population, and the need to improve economic performance," de Raad said.

The big lesson learnt from the crises in the northern hemisphere was that when economics and politics collided, the result was a mess.

"This all seems far away from little New Zealand. But our fiscal deficit will balloon in the next 20 years, burdening future generations with debt, so the current generation can have "free" health and superannuation, which successive governments have promised but failed to provide for," de Raad said.

"Health and superannuation costs costs will grow exponentially, unless New Zealand embarks on a credible strategy to stem the flow. Governments will be forced to borrow and push public debt levels to that of the US or Greece," he said.

"If we wait until the crisis hits in 15 years or so, we will face similarly unpalatable decisions that the US and Europe are facing now."

Despite Retirement Commissioner Dianna Crossan proposing a gradual increase in New Zealand's superannuation age, both Prime Minister John Key and leader of the Opposition Phil Goff were opposed to even looking at the issue as they played politics instead of dealing with the economics of the situation.

"We also need to change what publicly funded healthcare we can access, and where and how we pay for it. There is not yet a clear strategy on managing the cost of healthcare either," de Raad said.

"Let's learn from the mistakes of the US and Europe. It may be more convenient politically to sweep economic realities under the carpet for future generations to clean up. But policies made under duress are poor. Gradual changes to policies to steer the economy for the good of all citizens are possible. But we need to start now," he said.

Meanwhile, on TV3's The Nation programme on Saturday, NZIER chief economist Eaqub said the current global crises being played out were a reminder that recovery would be a slow grind.

"What we saw in the markets was really a panic reaction and we saw a big correction in equity markets and financial markets, but the real economy has just gone from kind of okay to flat.  We're not going backwards, it's still not recession, but it's still that realisation you know where things were okay, to something being quite modest, and you know markets will vacillate and they go from great to fair so quickly," Eaqub said.

Consumers in New Zealand needed to keep a focus on paying down debt.

"We have been dealing with some of them, but we still have some big challenges. You know we have an ageing population that no one talks about. Government is going to blow out to the American levels in ten years' time. So there are some big issues to discuss, but they're not in crisis point yet," he said.

It's all very well saying that government debt is relatively low but in NZ unlike the US we cannot simply walk away from bad property purchases by handing the keys back to the bank.

I firmly beleave that in the event of a banking recession the government will bailout banks therefore I think that it is wrong to simply look at government debt and summerise that we are OK.

One signature from who-ever is priminister at the time and NZ will be another US, Greece, Ireland.....

The reason Key and Goff wont talk about eligibility for Super is that they are afraid Winston will go for the Grey vote, get 5% and hold the balance of power.

How good is that MMP again?

Good enough to stop the likes of Muldoon getting in with 34%...

10-15 years is extremely optomistic at the rate the way things are going now. Add in the private sector debt effect and adjust for all the happenings and changes, that the govenrment will need to borrow for. Who knows but 10 years????? Yer right

A fish rotting from the head would be far more representative.

Don't hold back there CR.Lol.

.... a screwed up economy , smelling of rotten fish , and bringing out the acid in us ....... gosh heck , New Zealand has transformed itself into a " rollmops " economy !

Gee GBH, the only acid I have to deal with is the ph level of my mash:) I don't have too many problems on tank water.

Note the increase in the blathering about NZ being an immigrant nation....why?

Because once the peasants are all talking happy about being immigrants..it'll be a bloody easy job for the shiney bums in wgtn to sell the idea of having a swag of new immigrants flood in...

In the space of a decade the ratio of old farts to working slobs will change greatly...all part of the back to the future gameplan.

Yeah great policy that, it means you can continue to run crap polices that ruin the country

But when people get sick of it and vote with their feet, it's ok because you just roll in some more immigrants.

It's a sign you've done something right I guess when another journo pretty much lifts your story for their own publication.