NZ Govt still on track for 2014/15 surplus, despite prospect of 'subdued world growth, or even recession,' PM Key says; 'World is now a different place'

NZ Govt still on track for 2014/15 surplus, despite prospect of 'subdued world growth, or even recession,' PM Key says; 'World is now a different place' 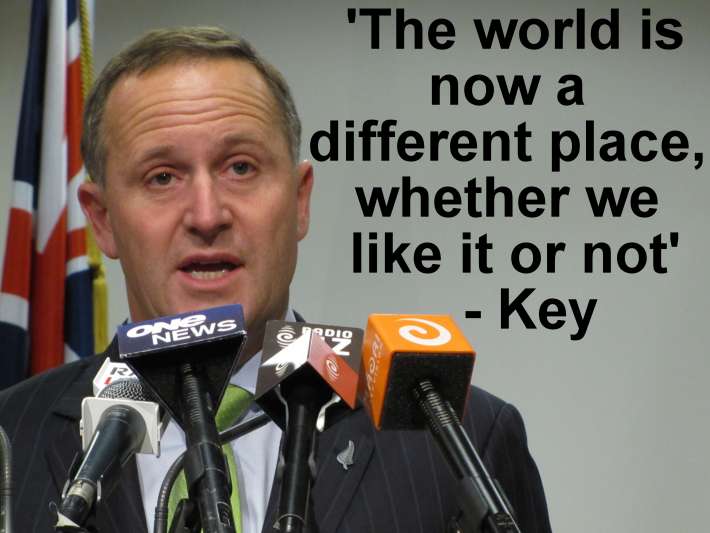 The prospect of slow world growth or even recession has not hit the Government's 2014/15 surplus target, according to Prime Minister John Key.

Speaking to the 2012 Local Government New Zealand Conference in Queenstown on Monday morning, Key told local government leaders they needed to do their bit to rein in debt, which "in some cases" had started.

Households, businesses and farmers had made changes to spending in response to the global financial crisis, as had the Government, which ran its second consecutive 'zero budget' this year, he said.

The Government was committed to returning its books back to surplus in the 2014/15 year, Key said. Budget 2012 documents showed Treasury expected a NZ$197 million surplus that year.

"That target is on track, despite recent events in Europe and the prospect of subdued world growth, or even recession," Key said.

"Our plan to grow the economy is on track. Growth in New Zealand over the next three years is forecast to be higher than the US, the UK, Canada, Japan, and the Euro area. It’s also forecast to be similar to growth in Australia," he said.

This time it's different

The world was now a different place, "whether we like to accept it or not," Key said.

"We are in the middle of an economic crisis in Europe, which is one of the world’s most important economic blocs and a key market for New Zealand’s goods and services, despite the growth of Asia," he said.

The outlook for Europe remained uncertain.

"A European slow-down will impact heavily on the world’s other major economies, which in turn will impact on New Zealand’s economic success," Key said.

"From New Zealand’s point of view, the crisis is not some isolated event on the other side of the world. We make up less than a quarter of 1% of the global economy so we can’t help but be affected by events in the rest of the world," he said.

"That means we need to focus even more on continuing to ensure we have the right balance in our economic plan. This means controlling debt and managing spending on the one hand, and setting the conditions for competitive and sustainable growth on the other."

Key said councils needed to think carefully about the capacity of their communities to pay higher rates during difficult financial times.

“New Zealand’s 78 councils make up 4 per cent of GDP, spending NZ$7.5 billion of public money each year. And they manage NZ$100 billion worth of assets," he said.

“They also perform a huge range of regulatory functions that affect households and businesses – from granting resource and building consents to issuing dog registrations. Councils have a role to play in creating an environment that is conducive to sustained economic growth – just as central government does.”

The government would not be forcing more council amalgamations, but pending reforms to local government laws would allow councils to amalgamate if they wished to.

“The amalgamation and new structure in Auckland has worked well. It has reduced bureaucracy, cut costs and the creation of a single voice has given the Auckland Council the capacity to arguably do more,” Key said.

A second phase of reforms involved setting a framework around central and local government regulatory roles, a review of development contributions and an investigation into efficient infrastructure provision.

“It will also consider the report by the local government efficiency taskforce, which was announced in June and is chaired by Auckland environmental and public law specialist, Michael Holm. This work will be fed into a second reform bill proposed for 2013,” Key said.

Productivity Commission’s latest gig to look at local govt productivity, regulation, and what central govt could do; MULs in sights again (March 20).

Construction companies being forced to build identical houses differently to meet the divergent demands of different council inspectors and their councils (April 6).

"Our plan to grow the economy is on track."

And relies entirely on borrowing and spending to increase GDP!

"Our plan to grow the economy is on track."..
just like growing plants, it needs plenty of manure and we have lots of that too

The government would not be forcing more council amalgamations, but pending reforms to local government laws would allow councils to amalgamate if they wished to.
“The amalgamation and new structure in Auckland has worked well. It has reduced bureaucracy, cut costs and the creation of a single voice has given the Auckland Council the capacity to arguably do more,” Key said.

Yeah, they have as much power as the government, if not more, when they fail to cooperate with central government agendas. Another colossal Key error - thought an inside man was a shoe in at the last Mayoral election and that would be enough.

Not just an oxymoron, it's a lie. An untruth.

Do you ever get a chance to ask the question, Alex? By not doing so, the NZ Media - with the singular exception of Kim Hill - are regurgitating lies.

We are moving from the idea of sustainable growth, towards the welcoming of the realization that what we need is the growth of sustainability. The number of h. sapiens embracing the concept is increasing exponentially. Damn those Exponents; whats love got to do with it?

A typical J. Key - speaking as a trader and not as a statesman:
He talks about economic growth (numbers) and forgets the hundred’s more Kiwis made redundant or moving to Australia in the last 2 weeks.

PM - economic success of a nation depends on decent jobs for the wider population. Where are these jobs ?

jeepers Walter, I thought you said traitor there for a moment.

has he mentioned  how we can achieve this economic growth or is everything reliant on the chch rebuild when ever that starts.
meanwhile thousands head offshore to get jobs and a better lifestyle where the ownership of water is not up for discussion.

Key strikes a blow for KiwiRail    "Our plan to grow the economy is on track.

Too little - too late if you ask me as local government is just cementing in their next lot of 10 year plans - and all those I've seen are growing their debt (and subsequently their rates charges).

If there was ever a need for a price freeze - it is in rates - as this is the only way to get an out of control local government sector to concentrate on core business only.

What! He can say the world's a different place whether we like it or not, with a straight face? How about an aopology for being, along with all the Merrill Lynch mob and cohorts, the cause of it! And worse, all the while, profiting from it. The sheer gall!

Yes, definitely great report! I first hear that sounds of the World is now a different place said PM Key. It is very interesting news while NZ Govt still on track for 2014/15 surplus, despite prospect of 'subdued world growth, or even recession. Thanks! :)
http://www.mybestbanks.com/property-management/

"Growth" is a relative term John. Helen Clark used to talk about "GROWTH" and allegedly YOU John are now fixing that "GROWTH"
phhh

Key said."The amalgamation and new structure in Auckland has worked well. It has reduced bureaucracy, cut costs and the creation of a single voice has given the Auckland Council the capacity to arguably do more,”
Yeah Right - just ask the ratepayers of the Super City just how overjoyed they really are ...it seems to this humble observer that we have once again been royally shafted by our deeply caring leaders and that will continue to be the status quo ad nauseum....

Yes, how on earth he said that with a straight face is beyond me .. I wondered whether it was a second appearance on the Letterman Show being reported.

OK ,over recent years Governments (of both main hues) have lumbered local authorities with more responsibilities that was once provided centrally. Also anything new ends up in local  areas where possible.
All I ask is whether our central government is going to take back  the bits dropped by locals in their bid for cost cutting.