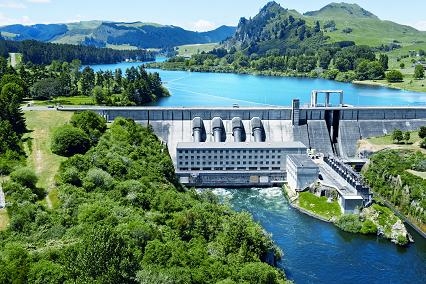 Mighty River Power is broadly hinting that it might ramp up its dividend payments in the coming year as it surveys a share price that has dipped far below the $2.50 at which the stock was sold to the public earlier this year.

The company, floated on the NZX in May, has announced after-tax earnings of $114.8 million for the year to June. This has comfortably beaten the $94.8 million forecast at the time of the float.

But investors, who have seen the share price sink from the $2.50 issue price to a closing price of $2.19 yesterday, will probably be most interested in the dividends the company can offer in future earnings periods.

The company's planning to update shareholders on earnings for the coming year at its annual meeting on November 7, but the comments appear a clear signal that the company will be holding back on expenditure this year in order to push for higher dividends.

If MRP does lift its dividends to higher than forecast this year, that would bring its strategy very much into line with that being employed by the Government over the next state asset to be partially floated, Meridian Energy.

As was revealed last week, Meridian - which is much bigger than MRP - is going to be sold in instalments, with investors only paying 60% of the price of their shares upfront, with the rest deferred for 18 months, and a higher rate of dividends therefore achieved during that period.

The Government's trying to ensure that there will be sufficient interest in Meridian to enable it to raise in excess of $2 billion from selling 49% of it. See here for articles on SOE floats.

Earlier this year MRP raised just under $1.7 billion for the Government. However, the outcome was nowhere near as good as appeared likely early on when as many as 440,000 would-be investors pre-registered interest.

In the event, only about 113,000 investors signed up after uncertainty created by a Labour-Greens policy to move to a single buyer of electricity, plus huge uncertainty over the future of the Tiwai Point aluminium smelter, which buys about 13% of New Zealand's total power output from Meridian.

Earlier this month, of course, a deal was struck between Meridian and the smelter's ultimate controllers, international resources giant Rio Tinto - with the help of $30 million of NZ taxpayers' money - that will see the smelter remain open till at least 2017.

In terms of making the Meridian share offer as inviting as possible, the Government will be keen to see returns to investors front-loaded before 2017, at which point the whole NZ power industry is likely to be subject to great uncertainty.

The Government is aiming to raise $5 billion to $7 billion from its partial privatisation programme.

The money from the sale of assets will be redirected into new assets such as roading and hospitals. Success of the policy is pivotal for the Government achieving its target of a budget surplus in 2015 because while the receipts from the asset sales and reinvestment into new assets will be treated as capital spending - if the Government's asset sales programme is not successful it would be faced with the option of either cutting back on spending for new assets - or borrowing more - leading to a deficit.

After the Meridian float, Genesis Energy is the one remaining big asset, although there is also the matter of selling down the 74% holding in Air New Zealand to 51%.

Unlikely, as the employed energy pricing model is unfit for purpose. Revaluing old generating assets towards current replacement cost and then paying away the higher regulator approved dividend, while debt funds capital needs, is a fool's game.

This is the "long game"
The float managers should have supported the price at or above issue price
They haven't
Meridian float will be influenced by the price of MRP, or the discount
The govt has whispered in the ear of MRP
MRP has complied with a bit of financial engineering
Revaluations. Increased dividend. Paid out of borrowings against revaluations?
Didn't do very much

Wouldn't touch it with yours

Does not feel good