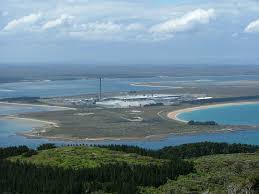 The Prime Minister John Key himself stepped in with the offer of a taxpayer-funded "sweetener" for owners of the Tiwai Point aluminium smelter earlier this year.

Last month the Government announced it had agreed to pay $30 million of taxpayers' money to the smelter's ultimate owners Rio Tinto for that company's agreement to enter into a renegotiated power deal with SOE Meridian Energy.

Back on March 28 the Government revealed that it had made an effort to "bridge the gap" in negotiations between Rio and Meridian, but that offer was ultimately rejected.

However, a series of papers released by Treasury detailing the lead up to the settlement of the power contract and the agreement for the Government to pay the sweetener, show that the Prime Minister himself, on March 27 telephoned senior Rio company officials and put an offer on the table.

While the details of the amount of money offered have been blanked out, other documents also released by Treasury indicate that the offer from Key may have been for a similar amount to that ultimately agreed to.

A letter from Rio on March 28 thanked Key for becoming "personally involved", but rejected the offer.

In a "stand up" interview with news media that same day Key said he had been "tangentially involved" in the process.

The media statements from the Government on March 28 came from SOE Minister Tony Ryall and gave no indication of the Prime Minister's involvement.

Also, the Government did not say the deal had been rejected till April 2, and said Rio had rejected it "over the weekend" (bearing in mind that it was Easter weekend).

The documents released by Treasury paint a picture of seemingly frantic activity within the Government in late March after Meridian had apparently put an ultimatum to the smelter's owners and was preparing to disclose that fact to the stock exchange.

Meridian did indeed go public with the difficulties it was having over negotiations on March 28.

Finding a resolution to the crisis was vital for the Government. In March it was involved in plans to float SOE Mighty River Power, while now it is planning to float 49% of Meridian.

The successful floats of these two companies were crucial to the Government's targeted returns of $5 billion to $7 billion from SOE partial privatisations.

More welfare for the rich and corporates yet again by this corrupt government.

In a "stand up" interview with news media that same day Key said he had been "tangentially involved" in the process.

Yep, broking the citizen's principal responsibilites for no tangible gain - what else was Merrill Lynch other than a broker.

c'mon Stephen Hulme, $30 million is chump change in the bigger scheme of things
With the need to keep the playing field clear in the run up to the MRP float, followed by Meridian 6 months later, it was a cheap play

As a financial engineer yourself, you would consider a $30 million long dated 3 year option a very clever postponement spoiler

Depends who's paying the premium - in my professional career I only ever sold option premium. Only chimps pay.

No real coverage of the John Key phone call in Mainstream Media- that I have seen. Interesting that this info was realeased now when JK is off to see the Queen. I wonder what influence the government has over the release dates of such information.

I understand that there is gonna be an extra 20 million NZ added to the Campa crapper campaign before the next big blowout.
It is to provide a floatable toilet for each of the grinders and crew for next time the NZ boat nearly flips. Also for the Ministers involved and jaunting.
Apparently it took a lot of wind out of the sales of Porta-Potti all around NZ of the homeless who had gambled their lifesavings on a crap campaign, in favour of the underdogs with no pot to urinate in, compared to the average oracle who have been crapping themselves, that they will be replaced..next....ever since the beginning of the event.
No2 down the gurgler.
And as for the sails seems a bit slack not to have a reefer or two on board like they do in the good old USA.
We here in NZ have to rely on an artificial high from the local dairy, legal, but barely....just.
But at least we can afford to finance the jaunt of the Ministers to San Fransisco with the GST paid by the legal highs, they do nothing about.
My point of view is different to theirs. A 19inch tv.
Not a grandstand seat of the entitled.
Justice. Thy name is crap.