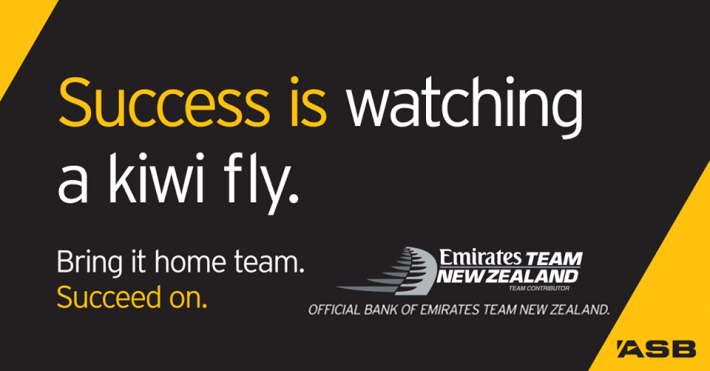 ASB has posted two advertising images featuring its "succeed on" slogan and Team NZ on its Facebook page in recent days. A spokesman for the bank told interest.co.nz ASB has had a long association with Team NZ having supported the team when it previously defended the America's Cup in Auckland, and banking both the team at an organisational level, and some of the team's members for a number of years.

"Building on this association, we recently confirmed our position as the 'Official Bank' of Emirates Team New Zealand. In the content of this relationship, ASB is referred to as a ‘contributor’ rather than a sponsor. The terms of the relationship are confidential but we are continuing to leverage our association with Emirates Team New Zealand through advertising and other channels,” the ASB spokesman said.

Pushed on how recent the official bank arrangement was, the ASB spokesman said this status was confirmed last week.

An unimpressed ASB CEO Barbara Chapman told interest.co.nz the first she had known of ANZ's Olympic role was when ANZ held a fireworks display in downtown Auckland to celebrate its new sponsorship deal. ASB's deal with the NZ Olympic Committee ended, as planned, after the London Olympics.

Zany,
You're a bit tough. If the ASB has directed some money at ETNZ then fine by me.
The party idea though is a good one.

I'M CONFUSED - who do I give my banking to?

Is there a bank in NZ that doesn''t sponsor a big sports event.
If there is i'm in.

How is ASB feeling right now after ETNZ lost 7 in a row?

The slogan is very much positive and encouraging. This is just a simple message but commanding all aspects of truthful success. Many businesses are in fact struggling to establish their own, and that they even make several marketing strategy towards those success they need, some succeed some failed. Most of those succeeded, they have been influenced with right aspects from joining workshops and consulting service like at http://eatmywords.com/services/consulting/.