Our money is getting a colourful makeover and its own website

Our money is getting a colourful makeover and its own website 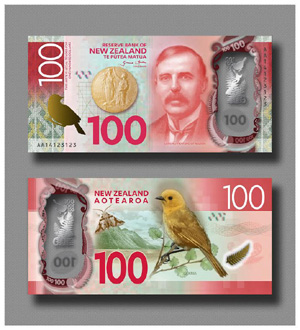 The Reserve Bank has unveiled the redesigned New Zealand bank notes which will be drip-fed into circulation from October next year, starting with the $5 and $10 notes.

The bank notes feature the same flora, fauna and famous New Zealanders that appear on the current designs but in much more vibrant, bold colours.

They also feature more use of Te Reo, with the words Aotearoa, Te Putea Matua (Reserve bank) and the Maori words for the birds on each note.

Both the current and new notes will circulate together and both will be legal tender. RBNZ deputy governor Geoff Bascand said the old series notes would be withdrawn from circulation naturally as banks returned worn and damaged notes. The bank expects it to take 12 to 18 months before the majority of notes in circulation are the new design.

Bascand said the need to stay ahead of counterfeiters, who now have easier access to sophisticated copying and printing equipment, was an important aspect of the redesign.

"Our new notes contain more sophisticated security features that greatly enhance the overall design," he said in a media statement. "The transparent windows are larger and striking holographic features will help make the notes very easy to verify, but hard to counterfeit."

The bank said other new security features would be added, including colour-changing or "optically variable" features.

Bascand told reporters that the rate of detected counterfeit notes in New Zealand was low compared to other countries – and below the performance target set for the Reserve Bank by the government.

"We aim in our performance targets at less than ten parts per million (so ten notes out of every million) -  fewer than that should be counterfeit. We are achieving that, it is under that target by a good deal," he said.

The RBNZ said there were approximately 148 million notes in circulation, and it expected it would cost an extra NZ$7 to  NZ$8 million a year for five years to issue and distribute the new notes and to replace its reserve stocks. The purchasing cost of the new notes over five years will be around $80 million, but the bank pointed out that, in the ordinary course of business, it would incur printing costs replacing lost or damaged notes of the current design. The bank said it estimated the additional costs as a result of moving to the new design to be around NZ$40 million.

In addition, more than 40,000 pieces of cash-handling equipment will need to be calibrated to recognise and handle the new notes and the bank said it was consulting with equipment manufacturers and suppliers on this.

The tender to design and print the new notes was won by the Canadian Bank Note Company (CBN) and they will be printed at the company's plant in Ottawa. CBN also holds the contract to print New Zealand's passports.

Bascand defended the costs of the redesign on the basis of the need for improved security as well as an increasing demand for cash.

He said there was a consistent growth in the number of notes in circulation of 4.6 percent each year.

"Notwithstanding the talk of a cashless society, we're still seeing increased demand every year for cash," he said, adding it was a phenomenon observed by many central banks around the world.

The RBNZ has set up a website, www.brightermoney.co.nz, with information about the bank note upgrade project.

why do we need new notes?

I rather like them but I wonder how much longer we need real money.  We can just about do everything we need with a card or phone.  I suppose that it is still neccessary for old folks who have trouble with new technology and it is good to help young folk control their spending, but there will come the day when it dissapears.

When are we going to get $500 notes so we don't need all this small change stuff?

Just use cash once a month for the barber who takes only cash.

We should have a note with image of Lorde..

Nice, I like them. Can't they also do a 200 at least?
Once NZ and much of the rest of the world start exchanging information on bank accounts, insurances, pension funds etc i.e. even the last detail of personal financial information in 2016 or 17, you might see a revival of the good old cash economy.

Or an OBR, or a bank run, or a home grown QE fiasco, or a hacker, a cyber war, but mostly, because I hate bankers, shysters, shills, inflation adjusters, exchange rate dumpers, over extended and over leveraged bludgers and a whole heap more allied to the rip the market and the customer and the futures and the Money Managers and the...
I think you may get my drift.
When does the buck stop here. Only In my bleedin pocket, Mr Rockerfeller and his Banking and Political cronies.
The sooner we end this game of shove halfpenny, Monopoly, gas guzzlers and tax evaders, Countdown and not Foursquare, not to mention Crony Capitalism unlimited and bludgers paradise, the sooner I would like it.
Or is that not politically correct.