Migration gains surpass 61,200 in the year to September; more people coming to NZ from AUS than the other way around for the sixth month in a row

Migration gains surpass 61,200 in the year to September; more people coming to NZ from AUS than the other way around for the sixth month in a row 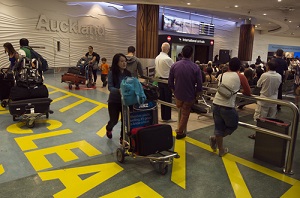 Net migration has surged to a record high of 61,234 in the year to September.

A net 5,600 (seasonally adjusted) migrants came to New Zealand in September alone, making last month’s gains the second largest on record behind July this year, during which there was a net gain of 5,700 people.

Statistics NZ notes the rise in net gain has been driven by both more arrivals and fewer departures.

Looking at arrivals in isolation, the influx of people coming to NZ over the year was led by those from India, Australia (including both NZ and non-NZ citizens), the Philippines, and China.

The figures indicate more and more Kiwis and Aussies believe the grass is greener in NZ.

The fall in migrant departures over the year was mainly due to few New Zealanders leaving for Australia, with this figure falling 15% to 21,500 people – less than half of the record 48,800 departures in the December 2012 year.

Looking at this a different way, the net loss of people to Australia decreased from a record 40,000 people in the August 2012 year, to just 200 people in the September 2015 year.

The latest figure is the smallest annual net loss to Australia since 1991.

Considering movements across the Ditch on a monthly basis, there’s been a net gain of migrants from Australia for six months in a row.

Before April 2015, there had not been a net gain in migrants from Australia in over 20 years.

He says, “With offshore labour markets remaining weak, net migration is likely to remain very strong over the coming year. However, over the next few years we do expect migration will eventually slow.

“New Zealand's economy is slowing and Australia will eventually become a more attractive destination for migrants from an economic point of view.

“What's more, the inflow of foreign migrants is now running well above residence approval targets (90,000 - 100,000 over two years) and consequently many recent migrants on temporary visas will have to return home over the next couple of years.”

Stephens also points out how the nature of the net immigration boom is slowly changing.

“The number of New Zealand citizens departing the country remains extremely low by historical standards, but has actually been creeping gradually higher for a year now. Meanwhile, the number of overseas citizens entering New Zealand been rising steadily…” he says.

ASB senior economist, Chris Tennent-Brown, highlights the significance of net inflow of migrants over the year including 53,989 working-age people.

“That strong inflow will support labour capacity, and contain wages. Housing demand will also remain supported by the inflows, particularly in Auckland,” he says.

“And the strong population growth courtesy of migration is a factor that is helping keep the cash registers ringing for retailers. In that vein, the strong tourist inflows over the past year are also a contributing factor to the lift in retail spending over the past year.”

Excellent. I'm finding it much easier to find quality tenants these days.

While immigration played a key role in house inflation in the three years after 2001 (Reserve
Bank 2007), it is unknown to what extent on-going immigration continued to drive price rises.
The housing boom has meant good profits for many New Zealand companies supplying materials and building services, but it implies investors would rather invest in their country’s homes rather than its businesses (Bollard 2005). The high returns for property has attracted finance and reduced the capital available for productive investment (Moody, 2006). The consequence is investment is going in to industries with limited capacity to increase per capita incomes. For example, real estate and building are domestically bound and do not have the market potential of export industries. They also have less opportunity to increase productivity through new processes and products. The irony is, as these sectors grow, they have incurred skills shortages which in turn has increased demand for skilled immigrants. The Department of Statistics ‘Long Term Skill Shortage List’ of 28/3/2006 includes carpenter/joiner, plumber, electricians, fitter and turners, fitter welders; all indicative of a nation building it's construction/property sector.
There is a danger that a sector of the economy is being augmented that is totally reliant on a small domestic economy. Not only do these industries have limited potential for per-capita growth but ‘deriving growth via factor inputs such as labour places pressure on infrastructure such as transport and land supply, and ultimately have a further negative impact on growth (ARC 2005). Finally, as the sector gets larger, it gains in lobbying/political strength and can lobby for immigration regardless if it is the best interests of the economy as a whole. This could be seen in Canada where the development industry has lobbied hard for high sustained immigration levels (Ley and Tutchener 2001).

When the polls ask "do you believe the country is headed in the right direction? they should ask "do you know what's going on"?

how's that related to immigration?

Do you think they're homeless because of the lack of work due to competition? I don't think so. I think it's more related to addiction and mental issues and the fact that they prefer to be homeless in Auckland rather than in Invercargill.

have you read the article, pressure on housing/rents is forcing people onto the streets, the more you have come in the higher number that will be, not just those that chose to or the menally ill, alcoholic as in the past

I'm not sure if its immigrants that are behind increasing violence, locals have that one covered pretty good, and this is backed up by the crime statistics.

Dairy likely to turn around a lot quicker than iron ore prices too so the mining booms that have lured kiwis across the ditch may not be seen again for a long time (10 years?). Interesting times.

same old same old, nothing will change with the current government, they have run out of ideas.
only answer is to pump the country full of immigrants to keep growth going

Spot on Sharetrader .....this has been going on for years ...bring migrants in, as it lowers wages and you can tighten up on conditions ....great for employers, as these new workers are way more "compliant" never ask questions and you can pay them less ...BONANZA !!
This may work in much larger economies, but the political animal that is the National Party is on the wrong path .....as in the long run the average standard of living in NZ for 90% of the population will actually decrease..... as long as the top 10% are happy, that's all that matters !!!

Please read the number again, the main issue is people stopped moving over the ditch.

This is true , we are doing way better than Aus right now , so why leave ?

so, Auckland was depending on enough kiwis departing to make way for and accommodate new non-kiwi imports - Now the locals aren't leaving, logically the pressure escalates.

Don't worry Two otherguys. Plenty of Aucklanders leave, just not overseas, it's to the rest of New Zealand.
http://statisticsnz.govt.nz/browse_for_stats/population/Migration/intern...

We have never been doing better than Australia, we are way behind in wages and average standard of living. What Aussies do however is look after their own born and breed Australians and don't put up with the PC crap we get in New Zealand, hence any slight downturn hits the "immigrant's" first and they get sent packing back to their country of origin along with the ex-prisoners they don't want either on the same flight.

very true. happened to me in OZ during the GFC in 2008. "Sorry mate, we have jobs but we keep them for our people" was the honest answer from a few employers. I felt it was fair enough and I left their country. to come here.

Make entry easy enough and we can have 50 million new immigrants here in a fortnight....

We need to import more Rich Listers, not poor immigrants, so we can keep up with the expenses expectations of our dear Ministers and our dear leader,