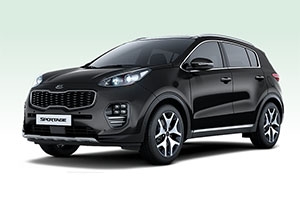 In April, more than 36% of all new vehicles sold were SUVs.

That caps a month where 9,939 new veicles were sold, the most for any April since 1982 (when sales were distorted by official gaming of the import licensing system. 1982 was following an election year where Prime Minister Muldoon opened the tap).

Typically April is the lowest sales month of the year. So April 2016 was the tallest dwarf since 1982.

Keeping the 2016 April sales up were "commercial vehicles". These were at their highest ever levels for an April. In fact, sales in this category have recorded best-ever months for the last six consecutive months.

The industry puts the "strong results" down to “healthy regional economies in Auckland and Christchurch combined with continued strong net immigration and competitive pricing".

Toyota Hilux regained its position as the monthly top selling commercial model for April with 17% market share (535 units) and was also the top selling model overall for the month of April. The Ford Ranger was the second best seller with 16% market share (507 units) with the Nissan Navara at 10% (327 units).

Over the past twelve months, 95,653 new cars plus 40,249 new commercial vehicles have been imported, the highest combined level ever. In addition, another 145,000 used cars were imported in the same year. (The highest used car imports were in the year to April 2004 when over 160,000 flooded in.) The level of April used car imports will be reported by the NZTA in a few days.

The other interesting fact from these April new vehicle stats is that commercial vehicles now make up 30% of all new imports for the first time. The new tradie ute is a status symbol, it seems.

Increasing dependency of fossil fuels is a catastrophe-in-the-making of truly Biblical proportions.

As well as the balance of payments, fuel importation and local pollution aspects, we [globally] face a 'blue ocean event' (together with the associated rapid sea level rise and even greater climate disruption) very soon, perhaps as early as September 2016:

Read somewhere 8 tons of CO2 are emitted just to make a small/medium sized car.
Then you have to ship it over the acidified barren oceans, watching gigantic fishing boats chundering out CO2, heavy metals and radioactive waste as they travel further and further looking for the last tuna....
It's so stupid it's almost human.
Or Kiwi;there is nothing green about the Ford Ranger etc unless you are comparing it to a Hummer.

I have read the article on Arctic sea ice and while I completely agree that we will face significant problems from GW, even the complete disappearance of Arctic sea ice,would have no effect on sea levels.
Seal level rise comes from thermal expansion and melting land based glaciers. Paradoxical as it may seem, Jim Hansen's latest research indicates that the North Atlantic may be cooling,as a result of pulses of fresh water disrupting the Atlantic Conveyor system. He believes that the increased temperature gradient between the Arctic and the Tropics will lead to high intensity storms.

Anyone else think it is time to reclassify utes like the Hilux and Ranger as passenger vehicles rather than commercial vehicles?
I don't know if the figures exist, but Ithink it is safe to say that more utes find their homes as family vehicles than many so called passenger vehicles, such as the Toyota Corolla which is almost exclusively bought by companies and rental agencies.

The US motor industry started making oversized, military-style vehicles when they discovered a loophole in vehicle emissions regulations.

Profits before people (or the environment) every time.

Now the Chinese and playing the same game, of course. That's one of many reasons why there is no hope for the next generation.

Most of the vehicles will be financed. The rise in debt is impressive.