RBNZ Governor says still in talks about including Debt to Income multiple limit in tool kit, but wouldn't use it right now because housing market has moderated; says English posing many questions on DTI

RBNZ Governor says still in talks about including Debt to Income multiple limit in tool kit, but wouldn't use it right now because housing market has moderated; says English posing many questions on DTI 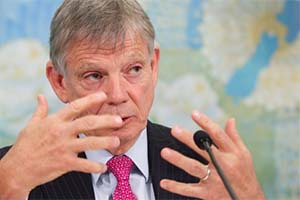 Reserve Bank Governor Graeme Wheeler says he would not currently use a debt to income multiple limit (DTI) if it was in his Macro-Prudential tool kit because the housing market appeared to be cooling off.

Wheeler told a news conference after his November Monetary Policy Statement (MPS) that he was still in discussions with Finance Minister Bill English about adding the DTI tool to the Memorandum of Understanding (MOU) that allows the Reserve Bank to use various Macro-Prudential tools, including its Loan to Value Ratio (LVR) restrictions. English had asked a range of questions about the suitability of using such a DTI tool and the potential risks and consequences, Wheeler said.

"We have requested approval from the Minister that these be included as in instrument in the memorandum of understanding around macro-prudential policy. We've had a couple of discussions with the Minster. He has asked a number of questions," Wheeler said.

"He asked questions such as 'how would these complement our loan to value ratios, what's the nature of the policy problem that we are trying to address, are there any unintended consequences from DTIs for example, are there issues around measurement of debt and measurement of income (and) who would be affected by DTIs," he said, adding he had had a couple of discussions with English and had another one scheduled in a couple of weeks.

"There's a number of reasons for that, it might be linked to the LVRs themselves, it might also be linked to the fact that bank credit criteria has tightened up. You are seeing banks reluctant to lend. In fact, I believe they have stopped their lending to buyers who rely on overseas income to support the loan. You are seeing them tighten up against developers, particularly some apartment developers and you are seeing their funding costs increase, mainly because lending growth is exceeding deposit growth and they are having to look for offshore lending markets to finance.

"So if you put all those reasons together you are starting to see house price inflation slow. We don't know if that is going to continue. We are looking at that very closely, we are watching the data as one would expect and keep an open mind on it."

Asked if the Reserve Bank would prefer to further tighten the existing LVR restrictions before using the DTI, Wheeler was non-committal, but said they could be complementary.

"Both tools can be very helpful in terms of reducing risk to the banking sector. In essence, if you look at DTIs they reduce the risk of forced sales because the borrower has greater capacity to service the debt, so there is reduced risk of getting into distressed and forced sales," he said.

"The LVRs are helpful in that they reduce the risk to the bank of there are forced sales and that's because the borrower has greater equity in the transaction, so they can complement each other very well."

"We felt that at 40% at this stage we pretty well feel we've got it right in terms of that default risk. So that's something that we would need to consider to the extent that if, at any point, we would did need to raise LVRs, and I say 'if', one would have to think how does that match with the integrity of the underlying default data that you have."

The CBIE has said in relation to the implementation of DTIs : "The worst policy mistake is to delay implementation too long, until loan levels and house prices have reached unsustainable levels. As we know all too well in Ireland, at that stage no policy option is appealing."

The DTI limit should be in place to prevent and not deal with house price increases from easy credit.
It should not be conditiional on "underlying default data": - it is then too late.

Remember that John Kee is the boss. When the housing price is not going up fast and may be is the LVR effect. Is it not the right time to include DTI also as both compliment each other and the chances of it shooting up again reduces.

But when it comes to action, they are always a step behind.

The longer you leave a problem, the bigger the mess.

Really have to wonder what the point was reducing the OCR today, in light of the US election. The DTI is needed, but it is really too late, as it should have come in 5 years ago. But I guess better late than never. The thing is that house prices can never really go down, so they need some type of control to stop the cheap credit from causing bubbles. Bubbles are hardly ever good.

what makes you think that house prices can never really go down?

You'd be hard pushed to see a chart on housing anywhere in the OECD that over a decade or longer doesn't show an upward growth trajectory, there might be blips down, but the over all trend has been up. And since the advent of women in the workplace, house prices have effectively doubled in respect to their earnings.

Other than Japan, Ireland, Spain, Italy and Greece.

at my parent's place in Italy (in a rich wine making area, but away from main centres) houses can't simply be sold, no one wants to buy. The area imported huge amounts of immigrants in the 90s and beginning of 2000s to supply labour and keep wages down. Young locals like me had to leave for greener pastures. As the GFC struck, the immigrants went back to their countries and locals were left with empty houses and no kids to pay their pensions.

Population going up. If we had a virus that wiped out 40% of the population prices would fall. Zombie apocalypse would also do it...

Too late for DTI introduction. Auckland and Christchurch are now bear markets. In all likelihood Hamilton and Tauranga are in decline. DTIs would only exacerbate declining prices and destabilise the economy. If DTIs were to be introduced, it had to be prior to 2016. To institute now would be a policy blunder, that would likely end in acrimony for the Reserve Bank, and Wheeler would be tainted, hobbling his post reserve bank career prospects.

A fool and their money are soon parted. A negative reaction I am sure.

DTI will never happen in an election year - the Nats will never give the Reserve bank authority to do it - it would be political suicide.

The Nats have already jumped off the bridge, disembowelment on the way down wont change the end result.

Nats are going down in next election as more the denial from them, more the anger as can be seen all over in social media and also comments by average kiwi in this website.

BREXIT may be fluke but not US election.

Question is will nats be able to feel the pulse of the nation and act - have doubts as are so much in power and arrogant that will not be able to see or feel anything beyond themselves.

Nothing new, In UK as also in USA - People in power as well as experts and media like here in NZ are on their trip and forget people are supreme.

John Key (the establishment) has spoken and Wheeler has buckled.

http://www.nzherald.co.nz/nz/news/article.cfm?c_id=1&objectid=11745852
"We've been busting our guts trying to buy our first home," the husband said.

"We just went to the mortgage broker earlier this week to see what they could do to help. But they just couldn't make anything work for us.

"We were absolutely gutted and I just said 'maybe that ship has sailed'.

"But my wife tried to stay positive and said 'don't worry, something good will happen for us'.

The Reserve Bank is never going to bring in the DTI requirements as Imhave previously stated.
Why it was brought up a few weeks ago is hard to fathom, as it would not work in This country.
It would need to be something like 7x income as anything less and there would be very few first home buyers in Auckland.
Investors could not be included in the DTIs as there would be very few able to buy property to rent out to the ones requiring a place to rent!
Let the free,market take care of things and it will at some stage in Auckland.
Adding taxes or stamp duties will only make things even worse.

You need regulations and controls to protect the public.... protect them from taking on too much debt.

If Residential buyers/Investors cant buy with DTI of 5 then that means the market is over priced.... throwing more and more debt at the problem is not helping anyone.

Banks years ago used to apply DTI's 0f 25/30 years ago. BUT when cheap credit was available they went for growth in the residential housing market.. NOW they have got the speed wobbles with risk and want the Govt and RB to introduce regulations.

And can we even refer to a "free market" these days anyway? Debt (and masses of cheap debt specifically), distort true market values.

An investor can service far more debt on a rental property than a buyer for their own occupation, as they haven't got the living expenses!

Really that analysis doesn't stand up. You ain't comparing apples with apples. for example an investor has to fund living somewhere else. Rent is only part of what you have to pay to live. (well hopefully)

KH, of course they have to pay for their own house to live in, but DTIs to investors won't work as it will be on each house and there isn't the living expenses as the owner occupier has.

You are implying investing is risk free, or low risk. Id suggest the risk rating should be the same as business lending, thats what it is to you, the fact that it is a house should make no difference.

The right time to implement DTIs was 2003 when prices started rising faster than incomes. The next best time is NOW.

Best time to plant a tree was 20 years ago. Second best time is now. Chinese proverb.

The Reserve Bank are directly responsible for the problem now experienced by small towns and cities across NZ and now the 40% LVR willl drive even more Jafa investors away from investing in Auckland. Waikato, Coromandel, Bay of Plenty, Hawkes Bay, Wairarapa and Manawatu going to see significant price increases. Perhaps a DTI only for investors would be relevant.
http://www.stuff.co.nz/business/84211942/sleepy-towns-awoken-by-property...