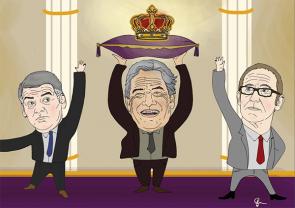 In April support for New Zealand First was up 3% to 10.5% putting Winston Peters’ party now clearly in the box seat to decide which parties will form New Zealand’s next Government after September’s election the latest New Zealand Roy Morgan Poll finds.

“In 2011 NZ First averaged 3.5% support in Morgan Polls conducted between January and October before polling 6.5% in the final Morgan Poll in mid-November and receiving 6.59% of the vote at the November Election which led to NZ First winning 8 seats – higher than any pollster predicted.

“In 2014 NZ First averaged 5% support in Morgan Polls conducted between January and July before polling 8% in the final Morgan Poll in early September and receiving 8.66% of the vote at the September Election which led to NZ First winning 11 seats – again higher than any pollster predicted.

“If NZ First can achieve electoral support of 10.5% at this year’s New Zealand Election that will translate into the party winning up to 14 seats in the new Parliament.

“NZ First Leader Winston Peters is often characterised as New Zealand’s version of US President Donald Trump and if support for NZ First holds up over the next five months Peters is likely to return to the Government benches for the first time since serving as Minister of Foreign Affairs a decade ago from 2005-2008.”

Electors were asked: “If a New Zealand Election were held today which party would receive your party vote?” This latest New Zealand Roy Morgan Poll on voting intention was conducted by telephone – both landline and mobile telephone – with a NZ wide cross-section of 862 electors between April 3-16, 2017. Of all electors surveyed 7% (down 0.5%) didn’t name a party.

The original report is here.

how much of that increase is on the back of the immigration issue.
national can not afford to lose anymore ground or BE could make history as taking over a governing party and losing power twice

Let's hope your last sentence will indeed be the case!

The damage is well done. Anyone with half a clue can ride Nationals immigration and housing blindness all the way to the beehive. I suspect Nat polling showed this a while back, hence JKs exit to allow option of a partnership with Winston.

Will a partnership of NZ First and National do anything for FHBs and fix the immigration curse?

NZ needs to go cold turkey and fix the cancer that is the National Party.

So perfect, yet happy to kill their host. Sounds about right.

Polls will keep on changing but 9 years is a long enough time for national to rule.

Need change. Being election year, national will announce number of cover ups to win votes knowing that in election year they cannot ignore average Kiwi and once they win can go once again on their own ego trip to help their favourites.

Winston & his party have become,more or less, the default party, or if you like, the protest vote. Just wish he would up the calibre of the MP's he takes into parliament. Over the years some real shockers have appeared for NZ First, a ratio of no hopers far out of proportion to the equivalent lot the other parties include in the shuffle. No reason for it at all, costly waste of time & public monies.

Your comment is rather banal. Firstly I would challenge you to be able to recall even half the names of the Labour or National caucuses..... and then reflect. Admittedly Winston's 'time' is drawing nigh, and new blood is needed to take NZFirst into a whole new political landscape. Ron Mark is waiting in the wings. I challenge you to question his integrity or intelligence!

Not much point in that, those names mean nothing but let's see. There was the first lot, the underpants man & the immigration fiddler who all bailed out & went turncoat, to keeping Bolger afloat, & we have had since then the retired weatherman & the one with the false passport and the one who mistook shrubbery for a urinal.Still National had the one who didn't know people didn't know who he was, which is probably the clear winner in terms of dumbos. Point is MMP has allowed far too many low calibre MP's to exist from all parties and of all people Winston should be the least likely to suffer fools.

Problem is what we all need is sensible debate on immigration but the people with vested interest goes to extreme when anyone wants to start one and term them as racist.

Thin line and many for the fear of being term as racist do not speak and than suddenly explode. Result is Trump and Brexit but if we have proper discussion it could be avoided.

Anything in extreme is bad so is immigration ( Many of us are immigrant and not against).

Ideally government should be in tune with people of their country and not with overseas / non resident.

Election year but yes this national government has to go for number of reason.

A debate on immigration is semantic. What we need is a debate on population and economic & social direction. Immigration should only ever be seen as a temporary measure within that framework...... and not be seen as a pathway to permanent residence or citizenship.

Yes apizap. The key figure is desired population total. This months immigration is just a one factor of many that makes that up. My vote is a final population of two million, but given the politics I would settle for 5 million. But no more.

Is TOP too low to register or not included in polling? interested to know where they are at.

So do I so he gets my vote

NZ First support is only going to grow between now and the election. Kiwis have had enough.

National will still be most popular but NZ first will gain a few of their detractors and pull alot of votes of Labour.

look what trump has achieved so far you will understand what peters can really do once in power... really nothing at all

But, like it or hate it, Trump is there for 4 years Too soon to tell what he will achieve.
Same for Peters if elected, there for 3 years.
I note these days there seems to be much more notice being taken of the murmurings of the great unwashed!
Is it too much to hope politicians might finally be 'listening', or is it just election year!
I am enjoying the political process though, it's fun entertainment and will only get better..

Wow . . . we are now back taking note of the polls after the pollsters recent experience with Brexit and Trump.

The two you mentioned were the anomolies - over a long run, there is always going to be an occassional miss. Polling in the Dutch election was pretty accurate. In the first round of the French election it was remarkably accurate. No reason to ditch polling just because of an occassional stumble. That is the nature of sampling. (and why we have elections.) I personally doubt the two you noted really indicate much at all.

I think it indicates they were wrong, nothing more nothing less. its stats101 isn't it!

The British election vs the polls will be interesting.

Nothing new, the moment J Key resigned it was clear Winston would be the kingmaker, that is not going to change until election

Problem with voting for NZ First is your voting for their 10 % of seats , plus whatever major party Peters chooses to go to bed with. Certainly not a good vote if you want a change of government.

Excellent result! Keep the momentum going! National has been pre-occupied with media spin to be doing something when in fact it is doing nothing to address the core problems of our exhausted/sick economy & dysfunctional society. Bring in more migrants to build more houses & infrastructure to cope with the increased number of migrants!!!! A dog chasing its tail. The only winners have been property speculators.... certainly NOT average New Zealanders.
As for Labour/Greens, if they had an answer they wouldn't know what to do with it!
NZFirst as kingmaker is the only solution to getting either side (National or Labour) back on track and focussed on looking after New Zealanders. Isn't that what a NEW ZEALAND government is supposed to do?!?

Yep a dog chasing its tail alright but even worse is the lickety licking of the unmentionable parts of the big corporates. This government has been all about creating Corprate NZ Ltd with no regard whatsoever to the minority shareholders, ie a la Enron for example, except that we are called taxpayers. Be it right or be it wrong the only discipline that's about is Winston, Labour as an opposition has been pathetic, pitiful in fact, and the main reason why this government has been able to dump on all of us with complete and utter arrogance and impunity.

And who do property speculators vote for..... and contribute campaign funds to? Welcome to the era of $$$ politics. I don't know of many parties that haven't succumbed to that Trojan horse. Oh yes.... there is one that springs to mind..... ;-)