Ex-Labour PM Mike Moore tells RNZ he hopes to live long enough to see another Labour govt, but worries the party's 'not seen to be on the side of those who are strivers'

Ex-Labour PM Mike Moore tells RNZ he hopes to live long enough to see another Labour govt, but worries the party's 'not seen to be on the side of those who are strivers'
20th May 17, 2:14pm by Guest 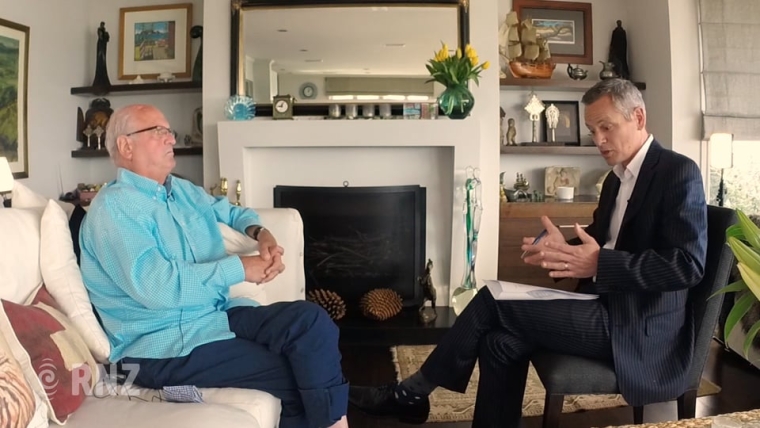 In part two of The 9th Floor, RNZ's Guyon Espiner talks to Mike Moore, Prime Minister for just 59 days in 1990 during the death throes of the fourth Labour government.

Former Labour Prime Minister Mike Moore worries about his party. Yes his party still. Oh, there is some bitterness and bad blood for sure, but he’s still a party member and desperately wants Labour to win office again.

It was an emotional day with Moore. Sadness, laughter, passion, love and regret. It sat at the other end of the spectrum from our interview with Sir Geoffrey Palmer. While Palmer speaks with forensic accuracy, Moore speaks largely from the heart, leaving you with images, forcing you to 'feel' and interpret what he has said.

Moore has made a remarkable recovery from a stroke in 2015, which cut short his time as ambassador in Washington DC. But things aren’t easy. Sometimes the right words take a moment to come or hover just out of reach, but talking is largely fine. Walking though is hard. I feel guilty as his wife Yvonne helps him inch across the room to accommodate our photo and video requests. But he loved that day. He loved talking about what he has seen and done and is still doing. He loves his party too. Are you a proud member of Labour, I asked him as we drew to a close late in the afternoon. “Yes I’m proud of what the Labour Party has done for people. And we can do it again,” he says. “I hope I live long enough to see another Labour government,” he chuckles, in one of many laughs we had that day.

But he has some sharp criticisms too. At one point Moore turns the questions on me, in his typically cryptic and profound way. He’s started watching Country Calendar again. “How many of those people on Country Calendar do you think vote Labour now?” I choose the diplomatic route. What do you think the answer is? “None." Why? “Because we’re not seen to be on the side of those who are strivers,” he says. “I do think we’ve got trouble.”

What sort of trouble? “I think its basis is how you elect your leader,” he says. “The caucus is our primary and sitting in that caucus you know what is going on and the idea that someone can not have the support in the caucus and the leader has to speak for that is a terrible idea.”

Moore has spent almost his entire life in the party - and it has been an extraordinary life. He left school at 14. He became an MP at 23. At 30 he got cancer and was given months to live and at 40 he was given eight weeks to save a government. Moore then had just 59 days as Prime Minister. He was, as a former staffer told producer Tim Watkin during our research for this interview, like the guy who always dreamed of being an All Black and was subbed on for the last ten minutes of the test.

Of course Labour was always going to be thrashed in 1990 given the firefight over Rogernomics. Moore was only installed to “save the furniture”. Remarkably he nearly become Prime Minister again, going from a record loss to a near win as National was nearly ousted after one term at the 1993 election. But then Moore lost the leadership to Helen Clark. That still hurts. A lot. Although he’s complimentary about her government (the first two terms anyway).

Moore is a fascinating study of leadership. He knows what it is like to grasp power, to have power and to lose it. He’s also fascinating because he surprises. He’s a union man - yes, even now - and Labour party member, but he supports the TPP, ran the WTO and is a champion of globalisation. That’s why we called him The Trader in this series.

In a world of ‘dog bites man’ obvious, partisan positions, Mike Moore is man bites dog. He's open to changing his mind. His conversion to free trade began when he started investigating CER in the late 1970s . National Prime Minister Rob Muldoon was looking to sign it and Moore started out trying to find fault. But the more he looked, the more he thought free trade would actually benefit workers - help them get their hands on the loot, is how he puts it. Now views will differ on that and fair enough. The point is Moore was curious and changed his mind as he processed the information. That is all too rare nowadays.

Maybe that is why we don’t quite know what to do with him. Where does he fit? He was Prime Minister. But only for two months. He wasn't always taken seriously domestically but abroad he attained probably the highest international position of any New Zealander. He wrote a book called Saving Globalisation in 2009. People sniggered at the title and the prospect globalisation needing saving. It makes pretty interesting reading today in the wake of Trump and Brexit.

Jane Clifton said it best when she described Mike Moore as like the opposite of L&P: world famous just not in New Zealand. Hopefully The 9th Floor goes some small way to changing that.

*This is part two of RNZ's The 9th Floor series and first appeared here. It is used with permission.

Probably the last PM we have had who could say with some degree of sincerity that he was in touch with, and equally concerned about, the lot of Mr, Mrs Average & their family. It was a very courageous and selfless move to step in and step up at the eleventh hour and lead Labour into the no win election after the Lange government had disintegrated. The next election he came agonisingly close to pulling it off, and for that, got sacked. His bipartisan involvement on the world stage subsequently proved that above all else his country's bestinterests were more valuable to him than any other thing , and thankfully, he was supported accordingly and appropriately by National in this regard. Job well done Mike & yes afraid to say, your old lot are still trying to go about directing their business from a room without windows and we could all do with one like you again.