America's Cup, APEC in 2021 could make Auckland infrastructure planning "a little bit complex," PM English says. Possible to bring projects forward, but focus is on how much the funding gap has grown over past 12-18 months

America's Cup, APEC in 2021 could make Auckland infrastructure planning "a little bit complex," PM English says. Possible to bring projects forward, but focus is on how much the funding gap has grown over past 12-18 months 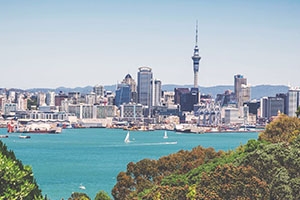 The infrastructure aspect of Auckland hosting both the America’s Cup and Asia Pacific Economic Cooperation (APEC) forum in 2021 “is likely to be a bit complex,” Prime Minister Bill English says.

The situation has put a new emphasis on a government/Auckland Council review of whether a 30-year plan for Auckland Transport projects kicked off in 2015 still fits with what is required due to greater-than-expected population growth. Assumptions have already shifted over the past 12-18 months, English said.

It may be possible to bring some projects forward, although English was wary to commit to details. “This is a pretty recent addition to the exciting future in Auckland,” he said of the Cup. “We’ve been working with the City Council on whether the current plan meets Auckland’s requirements [before Team NZ won the Cup].”

Terms of reference for the Auckland Transport Alignment Project (ATAP) signed in 2015 between government Ministers and then-Auckland Mayor Len Brown outlined how parties including the Ministry of Transport, Auckland Transport and the NZ Transport Agency would work on a package of transport investment for the city over the next 30 years.

Currently, a $24bn pipeline of work is pencilled in over the next ten years, with funding worth $20bn already allocated, English said at his post-Cabinet press conference Monday. But while discussions are ongoing about the $4bn gap, this may now be larger than first thought, he acknowledged.

This fits with comments from Auckland Mayor Phil Goff in early June that the gap was more like $7bn rather than $4bn. “[The $4bn] was based on a 16,000 rise in population by Auckland each year. We're now growing by 45,000, so we add the population the size of the city of Tauranga every three years,” Goff said at the time.

The Council is currently formulating its long-term plan. As part of that, the government is in constant discussion with it over whether the plan and ATAP match, English said. “If we can get those aligned we’ve got a pretty powerful common view about which projects need to be done and how they’re going to be funded.”

English’s comments came as media quizzed him on an announcement Monday that the government would give $5m to Emirates Team New Zealand for operational funding to hold on to key staff.

There would be separate considerations on how much the government got involved in funding the facilities and infrastructure required for one of these events, as there had been for the cricket and rugby world cups, he said.

The $5m was one of the more straightforward issues, English said. “But the major events aspect of it – the infrastructure aspect of it – is likely to be a bit complex. And as it turns out, it falls in the same year as New Zealand’s hosting APEC. So that will bring a whole set of demands and complications with it as well.”

Initial discussions will likely involve deliberations on whether the Cup could even be held at the same time as the ongoing APEC forum – there will be something like 23 Ministerial meetings of APEC members in Auckland during the year in the lead up to the leaders’ meeting, which is typically in November. It could depend on when “peak APEC” is, English said.

“Of course, you wouldn’t want to be putting more pressure on in Auckland in 2021 than is necessary,” he added. Asked if this meant the Cup might need to be held somewhere else in the country, he said discussions hadn’t got that far.

However: “Look, I don’t think it’s that realistic to have the actual finals anywhere else. But I’ve heard various speculation that the team might want to, in some way, bring…aspects of the event to the rest of New Zealand. But it hasn’t been discussed in any detail.”

Why must it be in Auckland?

APEC. Must be a lot of bureaucrats and freeloaders if it can tie down a whole city and be seen as a problem four years out.
Maybe we should just bring in the leaders, put them up in a scout camp somewhere. Probably we could afford to employ a cook and put on a few beers.
And what about New Zealand with all it's social problems. How many troughers do we have crisscrossing the world, staying five star in interesting cities. Do they produce anything for us.

A few weeks of pampering troughers is seen as a major economic event in NZ. In 2017 in Vietnam, it's seen as a non-event economically.

We should have had the waterfront stadium, that was a great idea lost.

yeah, sports stadiums are perfect for sailing events. We could take out the grass and put a large paddling pool in, and then the design rules can state that this time we are going to race remote controlled model boats.