Leader Simon Bridges says Adams is the best person among National's ranks for the Finance job; she is also bumped up to three on the party list

Leader Simon Bridges says Adams is the best person among National's ranks for the Finance job; she is also bumped up to three on the party list 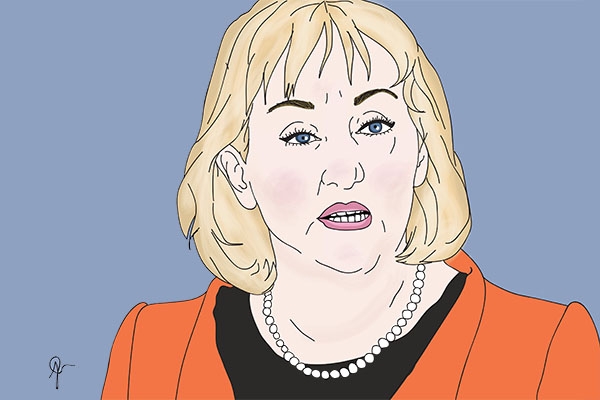 Leader Simon Bridges says she is the best person among National’s ranks for the job.

She has also been placed at number three on the party’s list, behind Deputy leader Paula Bennett and Bridges.

Bridges says he announced Adams as Finance spokeswoman ahead of the impending reshuffle to show “the economy remains the National Party’s number one priority”.

He was not offered the Shadow Finance portfolio.

“Amy is an incredibly experienced former Minister, serving as Associate Minister of Finance as well as holding a range of important and challenging portfolios, from Social Housing to Justice and Environment, which she handled with real diligence and focus,” Bridges says.

Adams has previously chaired Parliament’s Finance and Expenditure Select Committee and has a background in commercial law.

In a statement, Adams says National will be advancing new economic and social policies ahead of the 2020 election.

But the party’s focus, for now, will be on “stop[ping] the threat posed by Labour’s economic mismanagement.

“Many of the Labour-led Government's planned policy changes will sacrifice our economic success and make it harder for New Zealand businesses to compete and succeed.”

She says businesses are less confident than they were six months ago, which is likely a reference to the slide of business confidence after the Coalition Government was formed in November.

It is worth noting, however, ANZ Business Confidence numbers show firm’s optimism is clawing its way back but is still in negative territory.

“The Government needs to focus on the quality and quantity of their new spending. They are continuously ramping up expectations. I’ll be keeping a close eye on their approach to spending taxpayers’ money,” Adams says.

Believe we once had one Ms Richardson from that electorate. Who when demoted from the same finance roll, abandoned those who had voted for her to represent them, threw the toys out the window, and jumped rapidly after them. This one here though is rather a pallid and lightweight comparison and a lawyer, I think? Not sure how either the personality or experience are really qualified for the job. Still as Winston suggests you don’t need much substance if all you can do is bark at cars.

“Many of the Labour-led Government's planned policy changes will sacrifice our economic success and make it harder for New Zealand businesses to compete and succeed.”

Under the National led government, majority of the Kiwi's found it hard to compete and succeed...

Amy will need to demonstrate policies that appeal to a majority of voters and importantly present them in a empathetic way if National are to lead the Govt post 2020. I am unconvinced that Amy's current public perception is sufficient at this time as she comes across as speaking too quickly, using Lawyers Language and is perceived as arrogant but she has time to change and I hope she successfully does so and rids NZ of the troublesome incompetent & inexperienced coalition of Losers Haters & wreckers.

Who really thinks that Amy Adams is robust enough to take on this new Tax - and -Spend Government ?

We need a bulldog for the job not a poodle .

Cullen is a Kremlinite in disguise and he is going to direct this Tax Working Group down a road where they tax us until they run out of other people's money .

Robertson is a fool , who has never had a proper job and thinks money grows on trees

It is going to be a tough job , and I am not sure these babies in opposition have the skills and know -how to see tax by stealth when it comes along .

Worse than that, is not Robertson, Cullen’s self declared protégée, or was that Cunliffe, perhaps it was a greasy pole between the two of them. But your point is on the money, for the Westminster system of our parliament to work for all of us, we need an effective and cutting opposition. We have had them in the past. Holyoake, Kirk,Muldoon, Lange, even Clark. Labour when in opposition for the last nine years were ineffectual, weak, an abysmal performance . Ironically that became part of National’s downfall. Allowed to become conceited, cocksure, careless. They thought they were infallible, the election told them otherwise.Sadly none of these National, shall we say, new faces look any more capable. Now Collins could have inflicted some damage for sure, but any hope of that has been well and truly buried.

If you want to see a tax by stealth, look no further than the cost of housing rort that National encouraged and what it's done to the financial situation of the young.

I'm never failed to be impressed by the blinkered greed some of you blue blooded dinosaurs possess.

Boatman you have vision as I, there is a real pup being solded to the masses, sadly the brains with experience have dropped out of the National line up, Arden/Cullen type people have come to the party, as Churchill said many times - if you want equallity go and live in Russia -. Maybe Bridges develops into a leader here's hoping !

What other choice does Bridges have? Since National has a lot of MPs but a tiny fraction of them can debate it out in the House.

Can't wait to see her spun out versions of what Labour, Greens are doing in policy.

Well six hours, or nearly, since this staged and meaningful announcement on this site, of what is, according to new leader of the opposition that is, the strategic appointment of an extremely important position. And there have been posts by five, obviously over excited, contributors. What a fanfare. What a yawn. This new National lot can certainly get the wires, not crackling.

Whoever drew that cartoon of her has done a good job on the eyes. 7/9