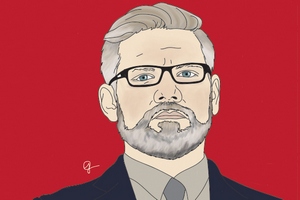 The Government has overestimated how much its latest student immigration policy will cost the economy and how many students will be impacted, according to analysis by ANZ.

He told Newshub's The Nation the policy would affect between 12,000-16,000 students and will cost the economy $260 million in lost revenue per year.

But ANZ economist Miles Workman says the Government hasn’t provided enough detail on how it arrived at this figure and the bank’s research shows it is likely to only cost $100 million a year and is likely to affect 10,000 students.

He says industry players in the tertiary education sector say maybe 50% or fewer international students actually go on to apply for a post-study work visa.

“You then have to consider how many within that pool are actually going to be impacted by the policy changes, based on what they’re studying or how long they study for.”

Assuming that’s roughly 50% as well, this would imply that the work rights of around 10,000 students could be impacted per year, he says.

And there is a “decent chance” that only a small proportion of those 10,000 are likely to be dissuaded from studying in New Zealand, Workman says.

All up, the policy is likely to have a negligible impact on economic growth.

“We estimate nominal GDP could be up to $100 million lower per annum as a result of these policy changes, due to both reduced export earnings and lower domestic demand for goods and services,” Workman says.

“[ANZ] appears to have used the new student visas, but most students stay here for between two and five years.

“So actually, the impact of this, if those people don’t come is going to be much, much greater.”

The full cost, he says could be between $300 million and “several hundred more.”

Lees-Galloway says the Government is focussed on providing a high-quality education, not getting more bums on seats.

“That shift from volume to value will improve outcomes for the students and ensure that export education continues to make a significant contribution to New Zealand’s economic and social wellbeing.”

The only thing this will affect is ANZ's bottom line, which is the only reason it's been published.

Students that go on to get post study work visas don’t buy houses.

The student migrants dream on? Yes.

International students that get working visas don’t go on to buy houses in New Zealand. They go flatting in shoeboxes, eat dominos and borrow their friend’s car to drive for Uber.

There are two different groups of students: 1) students primarily from poor countries, resembling what you describe, and 2) children of wealthy families who are using the study-to-work scheme as an easy entry and do indeed buy property. I have quite a number of friend who have been through the Pretend Tertiary Education sector to get into NZ. They attest that the second group can often be easily identified by an expectation that they don't need to attend classes or pass tests because "We paid you all this money. You have to pass us."

Except many do. All you need is a few to take lower quartile homes to put them out of reach of FHB who cannot access higher up the market.

At the end of the day I don't think there is the data to prove this either way.

My intuition is that international students that complete poor quality courses (degrees and high quality programs won't be affected by this policy apparently) go on to earn low wages and are typically single. I'd say they are one of the least likely demographics to be able to afford a house, particularly in Auckland.

I reckon this bloke Lees Galloway is way out of his depth ............ migrant exploitation is going to happen no matter what he or anyone else does , he might as well fart into the rainstorm currently passing over Auckland .

Hell , even well educated migrants are underpaid when the arrive here

All the well educated Brits I know negotiated comparatively impressive salaries here. All had some form of specialism/experience that is in short supply in NZ, so were able to come here with a decent wage.

True,I was a well paid immigrant and when I came I held back wages for experienced computer programmers by a trifle. I didn't cause any to lose their job or stop a young Kiwi getting into the business. However our low paid immigrants push down already low wages; unfair to low paid and unemployed Kiwis. If we have to have immigrants make them well paid not 3rd world students. They are a recipe for corruption.

It seems like some of these well educated migrants have been paying other people to do their homework
https://www.radionz.co.nz/national/programmes/checkpoint/audio/201864879...

So ANZ now get to set an agenda on immigration policy and are allowed to interfere with the governments discourse and that of the electorate. Oh New Zealand we really have opened up a can of worms. Is it time for the banks to stick to lending rates and saving rates and leave governing to the government. I sometimes feel that there is a dirty façade in this country hiding a deep rooted corruption that protects the vested interests of a secret 'Upper Class'

Addendum. To get involved with this ANZ must be worried about the impact that this will have on their loan book and where they are currently seeing the housing market go... Property 'snakes and ladders' I guess. Did someone just roll 'snake eyes' and about to fall from 99 - 50....??

A very thin, transparent facade - I can see through what they're trying to do.

And John Key hasn't even started his job at ANZ yet.

Do international student still pay a premium? When I was studying I recall that they paid around 2.5 times for the same course as residents/citizens.

Not saying the government is right or ANZ is wrong but if someone has made a mistake with the numbers.....

My understanding is it isn't a premium per se, rather they pay the full cost of the education, whereas NZ students are subsidised by the government to (nearly) the full cost.

Depends on the institute/university/course. Even to get a course equivalent to higher levels of education (degree, bachelors etc), means they can still pay relatively low costs. If they are Australian they get the benefits of NZ student course costs in many cases.

Well I am pleased the ANZ is brave enough to make any statement about immigration. There really does need to be a well informed public debate.

Immigration Minister Iain Lees-Galloway says his ""changes to post-study work rights will help eliminate migrant exploitation"". ANZ says they will cause NZ to lose $100m GDP and the Nats ex-Immigration minister disagrees. If you read Prof Stringer's report on Worker Exploitation (Dec 2016) then $100m is a trivial amount. This is a problem that should have been tackled in 2016. The exploitation of naive foreigners from 3rd world countries is a major embarrassment to NZ even if most never attain permanent residency. It has been noticed in India and in Filipino media. So even if you have no humanity and don't care less about exploitation then you need to be worried about the negative effect on international opinion let alone the introduction of corruption to NZ's traditionally honest business environment.

I am please to see Mr Lees-Galloway does not think his proposals will solve the problem only help solve it. He needs to keep his labour inspectors working overtime so long as there are people desperate to escape their own countries and get to NZ with its welfare state.

See https://www.newsroom.co.nz/2018/06/12/118097/immigration-and-education-u... a recent MBIE report: "" 27 Indian students who were enrolled at he same postgraduate diploma business course with the Nelson Marlborough Institute of Technology became pregnant. The pregnancies were identified as a “risk trend” among postgraduate international students wanting to speed up the process of obtaining work visas, and/or permanent residency. ""
..

Hilarious - I do hope whatever chaps are responsible for that in Nelson do the honourable thing and pick up the tab?

By hook or by crook the government need to show they are reducing immigration. The so called exploitation of immigrants can be controlled by other means using existing employment law
This minister like most in the cabinet are not transparent or honest

Alpappy: I would like immigration as per other countries but that is only an opinion; others have said they love immigrants and the more the merrier. They may be turkeys but it is an opinion they are entitled too. However worker exploitation and corruption does exist and not only exists but is widespread (see Prof Stringer's report from 2016). That has to be tackled - it is a matter of morality not opinion.
For the time being I give the minister my support - at least he is willing to admit the problem exists and is his responsibility.

Block off all the student to entire family gets residency path ways and you'll see how migrants really value the education they receive from these 2 day a week basket weaving schools.

This govt don't give a damn.
Another day, another story about China taking our water -or- slave run fishing boats in our oceans -or- how it's so difficult to a pen to paper and turn down the immigration tap -or- why it's so difficult to remove some red tape and build a few modern balsa wood and tin houses.

The minister last month also cancelled the deportation notices of the man's first wife and her children.

He would not say why they had been allowed to stay when immigration rules did not allow for multiple partners or marriages.

How is this not corruption you'd expect to see from someone like Maurice Williamson.

Another corrupt piece of filth is Shane Jones who took bribes from fraudster William Yan and granted him Citizenship. Shane Jones is now part of "NZ First".

With scum like Jones and Galloway pulling the strings there is no hope.