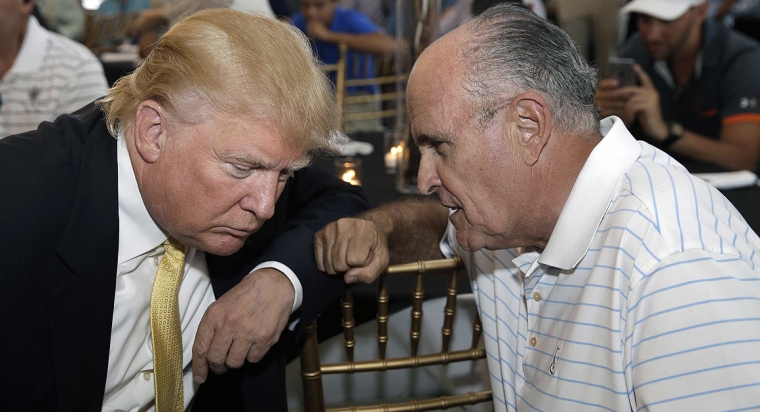 This article comes from DCReport and is used with permission.

A human rights organization has asked Dutch prosecutors to open a criminal investigation into multi-billion dollar money laundering schemes that they say were aided by Donald Trump’s lawyer, Rudy Giuliani, and his old law firm.

The complaint is clearly aimed at examining how much money stolen from a former Soviet satellite ended up benefitting Donald Trump. He is named 16 times in the complaint’s footnotes.

The complaint describes “one of the biggest fraud cases ever” in which “some of these money flows ultimately ended up in the Netherlands” because “Dutch service providers helped to cover up the money laundering acts.”

“The money laundering network started in Kazakhstan, where a figure of up to USD 10 billion was purportedly embezzled,” the complaint asserts. “This money was subsequently circulated by two Kazakh oligarch families via a worldwide network of shell companies. A number of these companies were established in the Netherlands. The money was subsequently invested in real estate projects in the United States and Europe, after which it was paid out as ‘profits’ via – once again – a network of shell companies.”

Netherlands banks and other firms play a significant role in illicit flows of cash around the world through sophisticated techniques to hide income and corporate profits. Many of these techniques appear to push the envelope on legal tax avoidance. When money laundering is involved these aggressive techniques could cross a line into aiding and abetting criminal tax evasion.

The complaint asserts that a small slice of the missing billions was run through Dutch shell corporations with help from Rudy Giuliani’s old law firm, Bracewell & Giuliani. Until 2016, Giuliani was a partner in the 470-lawyer firm.

Neither Giuliani nor anyone at his firm Giuliani Security & Safety LLC responded to requests for his side of the story. Multiple requests for comment prompted no response from Greg M. Bopp, managing partner of what was then Bracewell & Giuliani, but is now called only Bracewell.

The complaint was filed by Avaaz, a global human rights organization in Washington which claims 48 million members. It has issued an open call to prosecutors around the world to investigate “the giant web of corruption” that it says propelled Trump’s rise.

Avaaz says it has approximately 290,000 members in the Netherlands. The complaint was filed Oct. 22 with J.J.M. van Dis-Setz of the Dutch Public Prosecution Service by Barbara van Straaten, a lawyer in Amsterdam.

The complaint filed with the Netherlands Public Prosecution Service in Amsterdam relies on court records from several countries that were dug up by investigative journalists, including James S. Henry, the investigative economics editor of DCReport.

The Dutch television program Zembla aired an investigative piece on Trump and his Russian associates in 2017. It followed up with an expose of a Trump business partner’s role in a Dutch money laundering scheme.

The complaint is aimed at uncovering the full details of Russian money flowing to various Trump projects using so-called anonymous wealth companies. Those are shell companies created to hide the identities of the owners. Trump and his family are known to have received vast sums from shell companies and have bragged about how much of it came from people in Russia and other parts of the former Soviet empire. Trump contends the deals were all lawful and he has no knowledge of any money laundering.

A criminal investigation by Dutch prosecutors could help that country avoid banking sanctions and loss of reputation by showing that Amsterdam enforces its own laws and respects laws on transnational crimes.

Roughly $10 billion was stolen from Kazakhstan, a former Soviet satellite. The current Kazakh government is in court in Switzerland and elsewhere trying to recover the money and prosecute members of two families it says stole the money and laundered it in the West. Other lawsuits connected to the stolen money are being litigated in London, Paris, New York and Los Angeles.

The $10 billion theft was uncovered by PricewaterhouseCoopers during its 2009 audit of BTA Bank, the largest in Kazakhstan. In addition, there is about $300 million missing from Almaty, Kazakhstan.

Court documents identify the suspected thieves as Viktor Khrapunov and Mukhtar Ablyazov, oligarchs whose families are bound not just by extensive business ties, but also by marriage. Khrapunov is the former mayor of Almaty. His son Illyas is married to Ablyazov ’s daughter.

“There are strong indications that the revenues of these crimes were probably mixed via a complex money-laundering network, and there was a great deal of mutual overlap” between the companies and people suspected of the crimes, the complaint states.

Both Khrapunov and Ablyazov are fugitives.

Khrapunov, who was tried in absentia in Kazakhstan, has been convicted of corruption.

Ablyazov, who was president of the looted bank, had his worldwide assets with an estimated value of $4.9 billion, frozen six years ago by a British High Court.

Trump has done business since 1983 with Russian oligarchs and wealthy former officials and business people in former Soviet satellites, including Kazakhstan, Georgia and Azerbaijan. A number of mobsters – American, Russian, and others – live in Trump Tower apartments. The building has long been known to local, federal and international law enforcement as a nest of criminal residences.

In 1987 the Kremlin, then still a communist state, provided Trump and his first wife, Ivana, with a luxury trip to Russia.

While a number of journalistic investigations have looked into Trump’s dealings with oligarchs and their money using public records and sources they were limited to public records, which are often scant. Dutch prosecutors, however, have the power to subpoena banking and other records, forcing their disclosure to prosecutors and, potentially, the public.

Trump is known to have done deals with some of those mentioned in the complaint, including Felix Sater, a violent Long Island felon who was born in Russia. For years Sater traveled extensively with Trump working on deals named in the complaint and handing out his Trump Organization business card. Despite these long ties and both videos and still photos showing the men together, Trump claimed during the presidential campaign that he would not recognize Sater if they were in the same room.

Sater is believed to be cooperating with Robert Mueller, the American special prosecutor investigating Trump.

In one deal involving Sater, millions of dollars from the Trump SoHo hotel and apartment tower disappeared into an Icelandic bank that was under the control of a Russian oligarch. That bank was part of a multi-billion-dollar scheme to defraud Dutch and British pension funds. Trump has testified that he was due 18% of profits from the building.

The faux gold letters bearing the name, under an agreement reached a year ago, have been pried from the building façade.

Just three weeks before the 2016 election, a massive expose of Trump’s role in helping Kazakh oligarchs hide their illicit money appeared in The Financial Times, a British business newspaper.

The newspaper said its investigation found that Trump had “assembled an eclectic collection of backers and collaborators. Some had chequered pasts, with links to organized crime or fraud schemes. But perhaps the biggest risk for Mr. Trump’s complex, often opaque, business empire was that it might be used for a purpose US officials fear is rife in the country’s real estate sector: laundering dirty money.

Trump’s SoHo project “has multiple ties to an alleged international money laundering network. Title deeds, bank records and correspondence show that a Kazakh family accused of laundering hundreds of millions of stolen dollars bought luxury apartments in a Manhattan tower part-owned by Mr. Trump and embarked on major business ventures with one of the tycoon’s partners,” the British newspaper The Financial Times reported after an extensive investigation.

Trump and his partners, the FT asserted, engaged in condo sales that appear to have violated the Patriot Act, the post 9/11 law that requires banks, developers and others to know who their customers are and the sources of their money.

Investigations to identify anonymous buyers of luxury apartments in New York and Florida, to determine how much of this was money laundering, were announced in January 2016, by the federal government’s Financial Crimes Enforcement Network (FinCEN).

Three months later the FinCEN director, Jennifer Shasky Calvery, spoke about her years of work on transnational Russian organized crime networks.  Much of her work involved Russian crime families “laundering their funds through the U.S. financial system. Often, this involved the suspected purchase of personal residences with criminal proceeds.”

In July 2016, the month the GOP nominated Trump, FinCen announced it would be investigating sales of luxury apartments beyond New York and Florida because of its growing concern about flows of illicit cash disguised in real estate deals.

While Giuliani calls himself Trump’s personal lawyer, his role is primarily to spread Trumpian disinformation about Special Prosecutor Robert Mueller’s investigations into Russian collusion and related matters concerning Trump and his 2016 presidential campaign. Because Giuliani appears on so many cable and other television shows, but not in court, MSNBC host Lawrence O’Donnell calls the former New York City mayor “Trump’s TV lawyer.”

*David Cay Johnston is Editor-in-Chief of DCReport and a Pulitzer Prize winning US investigative journalist. He featured in this interest.co.nz video interview earlier this year.

Sounds a bit like the scheme I was offered.
However, mine was only $10million and it was some guy from Nigeria.
Looks like Giuliani did well out of his offer.

Its just gets dirtier and dirtier by the moment.

Why is this rubbish even on here guys? This is NZ and we don't need anymore anti Trump articles by an obsessed Democrat. Following him since 1985? Give us a break.

DiDi or DeeDee
I guess it’s relevant because money laundering is a worldwide problem that even tiny NZ plays a part in
Witness the Panama Papers or the flood of grey money from China which is partly responsible for your overblown housing prices
NZ took the entire silly Californian modern maths system in my day & yes NZ does export to ......America
Of course let’s not forget the $US the most liquid currency on the planet NZ buys its fuel etc in & AirNZ buys their planes in etc etc but by all means keep your kiwi head firmly buried DD