Boosted by strong demand for rental cars and the tourism market, new vehicle sales leap to a new record high in October, with sales of electric vehicles nowhere in sight

Boosted by strong demand for rental cars and the tourism market, new vehicle sales leap to a new record high in October, with sales of electric vehicles nowhere in sight 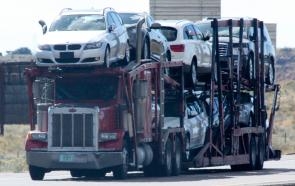 There are records all round for new vehicle sale in October.

Firstly there were 11,767 new cars sold, the most of any month in any year on record. And that is +6% higher than October 2017 which was the previous record.

Sixty percent of these were SUVs. This is the first month more than 7,000 SUVs have been sold in a month, with a record 2,221 compact SUVs sold, 3,004 medium SUVs were also sold and that was also a record for that category.

The 4,903 commercial vehicles sold was not a record, but it is the best for any October and +11% higher than the same month a year ago. Strong demand by tradies for pickups continues and diesels are their favourite.

Sales on new electric cars aren't registering and are below 'rounding error' levels.

The October result has been boosted by rental car company purchases, underlying the strength and prospects for the tourism market

Toyota retained the market lead for passenger and SUV registrations with a huge 33% share of the October passenger and SUV market (3,875 units), followed by Mazda with 9% (1,078 units) and Holden also with 9% market share (1,024 units).

Data for used imports will be released in a day or two. Recently, this category has been declining.

There are now more than 4.2 mln licensed vehicles on New Zealand roads and that is growing at about +3% per year.

Every one of those new vehicles will become a 'stranded asset' before their useful life ends.

Has nobody told these folk this?

It's like watching lemmings........... Clearly, this needs legislation - it's proof positive that 'free markets' deliver stupid outcomes as randomly as good. Escalating price on carbon, clearly signalled? And it that put the Nats back in, it just proves we were too immature to survive as a species. Sad epitaph.

Electric vehicles are circa 1.9% of new light vehicle registrations, compared to 1.2% a year ago. That is fairly interesting, not much longer until they are more than a blip I would think.

1.9% of new vehicles being electric is really good. That's one in every 50. Especially with our low carbon electric grid. Further there is a huge amount of people waiting for the release of the Tesla Model 3. That is going to be the tipping point on the S curve where we will see exponential adoption increases.

Ocelot - beware percentages. There are more new ff cars being sold than ev's. Increasingly more, by more increase than the EV increase.

Those ff-vehicle buyers will clamor noisily for ff pumps and 'cheap' ff, for years to come. Takews up past any tipping points - they're stranded assets - as will be much of our infrastructure.

A buoyant economy with low interest rates; what do you expect?

Of course, new cars are going to sell in big numbers - even the unreliable German brands.

I expect that many people are still using their house as an ATM. Taking that feel good equity and buying a new car. Personally I'm surprised at the figures and its interesting its happened at the same time as low business confidence, go figure.

Tourism seems to be the key driver here. They're usually big & bold organisations & would be negotiating some pretty good deals, I would imagine. Skinny margins? Probably. I know we keep hearing how car numbers are going to increase further globally, but there are already signs of collaboration between major car manufacturers which I can only see growing in the next recession. There are way too many people on the planet & close behind that there are way too many cars. And reading about Japan this week, not enough fish to feed the people. Surprise, surprise! Tipping point?