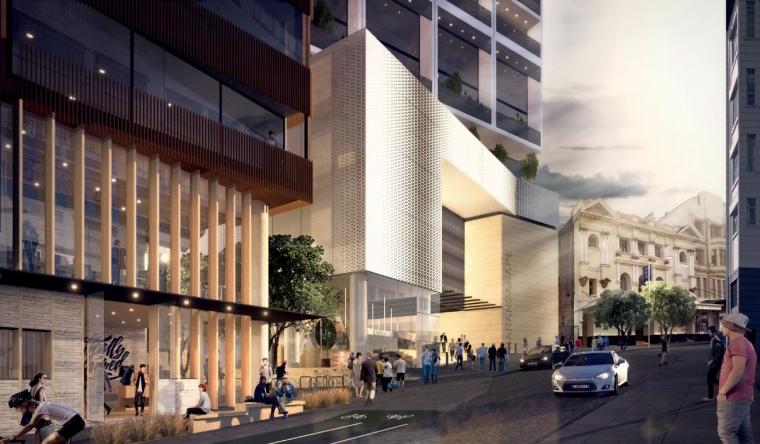 An artist's impression of the Karangahape Station which will be built in Auckland’s Mercury Lane as part of the City Rail Link project.

A number of major transport projects in Auckland could be delayed as the New Zealand Transport Agency (NZTA) seeks to tighten its belt.

Under the proposal the Government would contribute $18 billion through the National Land Transport Fund ($16.3 billion), City Rail Link ($1.4 billion) and Crown Infrastructure Partners ($0.36 billion). While the Auckland Council would contribute $10 billion in funding through rates, development contributions and borrowing ($8.45 billion), plus the Regional Fuel Tax ($1.5 billion). Auckland was expecting to receive 38% of the NZTA administered National Land Transport Fund over the next decade.

But it now appears the NZTA’s finances are tighter than expected. According to Auckland Deputy Mayor Bill Cashmore, he has been told there are plans by the Government agency to look for savings in the ATAP budget.

“There are some things in the ATAP plan that they won’t be able to fund in the next three years,” Cashmore says.

But he says he remains in the dark when it comes to which projects will and won’t be funded.

He says he's looking forward to seeing where the NZTA thinks it can save money.

But Cashmore says attempting to cut money from State Highway funding and roading to pay for public transport projects would be problematic.

“Public transport has to be part of the solution for all of this. But if you stop spending money on roads what are the compounding economic effects going to be? It’s about having a balanced approach.

“If that investment goes there, but doesn’t go somewhere else what is the collateral damage? It’s a massive balancing act that’s difficult and extremely challenging.”

And Cashmore says it’s not just Auckland facing such pressures. He says other growth areas like Hamilton, Tauranga and Queenstown are also dealing with similar problems. Cashmore says part of the problem is being able to secure longer term funding for major transport projects.

The Government Policy Statement on Land Transport (GPS) sets out the overall amount of funding to be invested in land transport over the next 10 years. The GPS covers funding allocated from the National Land Transport Fund (NLTF), the associated local share and any other Crown contributions to land transport.

But Cashmore says the fact the GPS, which was released last year, is only produced every three years means some projects lack the certainty of funding they need from the NZTA and are somewhat dictated to by the three year electoral cycle.

“The uncertainty over funding doesn’t help contract procurement. The money is doled out by Treasury in three year increments. I’ve made my opinions on the issue clear to the NZTA and the Minister of Transport.”

Transport Minister Phil Twyford’s office refused to comment on our questions about ATAP funding and which projects were and weren’t being prioritised in Auckland and referred our questions to the NZTA as they were "operational questions".

But Ministry of Transport manager of investment Helen White confirms the funding for a number of projects is under review.

"The NZTA recently wrote to all councils with an update on the delivery of the National Land Transport Programme 2018-21, including how the remaining funding will be prioritised."

But she says ATAP is still a priority and she expects the NZTA to “progress it in a way that is consistent with the Government’s commitment to Auckland”.

“Early work has begun on developing GPS 2021, which will build on the direction the Government has set. We expect to provide advice to the Minister in the second half of the year on what may be needed in GPS 2021 to achieve the Government’s vision for transport.”

NZTA director of regional relationships Steve Mutton says it has written to Auckland Council and other local authorities to provide them with an update on the prioritisation of remaining funding within the 2018-21 National Land Transport Programme (NLTP).

"We know there has been a period of uncertainty over funding and that our investment partners have been wanting to hear from us to give them certainty about what local projects they can be delivering. We have heard and acknowledge councils concerns regarding local project funding. The Transport Agency’s role is to deliver the priorities set out by the Government when prioritising local projects. We need to ensure our investments reflect this significant shift which focuses on creating a safer, more accessible transport system that works harder to protect the environment and delivers the optimal outcome for New Zealand with available funding levels.

"While there was more money than ever to invest through this NLTP, we also received an unprecedented number of funding requests and funding is limited which means we can’t do everything."

Time for Superman Shane to the rescue.

its time to swallow the pride and allow tolls for Auckland roads, the toll should never have been removed from the harbor bridge, we would have had the second crossing by now

There's more to Auckland that just the North Shore.

Do you work for the Council?

No, but I live in a part of Auckland that doesn't have a bus way like the Shore does.

Relax. No money gets spent on the shore any more.

Do we count this as a climb-down, or add it to the fiscal hole which totally wasn't a hole until it was?

If Auckland is going to miss out on LRT so Wellington can get it then there should be riots in the streets. North West Auckland is paralysed with traffic and more and more houses keep getting added. Wellington on the other hand is absorbing bugger all new migration but want the same shiny toys as everyone else.

riots on the streets of Wellington I presume ..
LRT plan for Dominion Rd is simply nuts ; we shell have a street party once it is canned ( ahem.. re-calibrated ) officially .

And Cashmore says it’s not just Auckland facing such pressures. He says other growth areas like Hamilton, Tauranga and Queenstown are also dealing with similar problems.

This is worrying, Hamilton and Tauranga are much more less spread apart than Auckland. If projects get costed on cost per usage criteria it is not going to be great for Auckland.

I would be keen to know how much growth in these regions is Jaffugees fleeing an underfunded city and putting growth pressures on other parts of the country.

those three cities are just as bad if not worse than auckland for peak hour traffic and have less public transport options,
queenstown CC needs to support the ferry that has been started and should seriously look at light rail too and from the airport
as for Tauranga that was a city built on roads and used to be easy to get around 20 years ago but due to the population explosion (mostly aucklanders) they have missed the boat on PT
Hamilton will get some relief when the motorway bypasses them but they have rail tracks running through the place that has never been utilized in any way
but those same three are national strongholds so will only get peanuts their way for now to fund PT,
and when national get back in it will be roads and more roads

I reckon Tauranga has a pretty decent rail network that could be used for public transport. If the current lot were smart they could swing some investment in that direction and maybe win a few votes from the locals.

No mention of anything electric using roads.
As usual.

Musk's Boring Company demonstrated a Tesla driving through their first tunnel at 200km/hr a few days ago. Using their already built in autopilot they could run (at 15m gaps) something like 10-20000 cars per hour through these $10million per km tunnels, that is the equivalent of 4-8 lanes of motorway traffic. Could soon be a way to cheaply and quickly fix our cities transport growth problems. https://www.youtube.com/watch?v=VcMedyfcpvQ
Just build the tunnels and people will happily pay for the autopilot controlled EV's to be allowed to use them.

Yes, most Auckland homes have $200k lying around to buy two (or more) new EVs with autopilot from a company that is very much on the rocks and may be months from collapse.

NZ in 2020's: any major infrastructure project takes 5+ years. In 5 years there will be 10-20 different EV's on the market with advanced autopilot features built into them. Also, in 5 years it is anticipated that steady -15-20%/year cost 'learning curves' on growing battery volumes will have made EV's cheaper than all but smallest ICE car segment (minis etc). Point is that with a relatively small $1-2billion investment in such tunnels and people's normal car buying behaviour we could have a solution to fix transport problems, without need for expensive white-elephant trains and trams.

And with the average age of the NZ car fleet at 14years, we have 10 years at least before we even need to start, and thats IF autonomous driving doesn't become yet another "cold fusion" or "peak oil" that has been 10 years away for 40 odd years.

Edit: and not to mention with cars you still have the problem of what to do when they exit the boring tunnel.. clogged surface roads going nowhere?

he appears to be planning his getaway from aggrieved investors.

Yes, comments on Hamilton & Tauranga are correct. The last 5-6 years have seen an explosion of vehicles on our creaking roadways which is making things tricky. The double flyovers at Bayfair & Baypark have ground to a halt as Twyford & Ardern cut NZTA spending to shreds. It has apparently cost NZTA a full layer of top management jobs as well. There is much frustration especially here in Tauranga. You're right about the National strongholds & we can't do much about that today, but towards the end of next year the people will have their say.