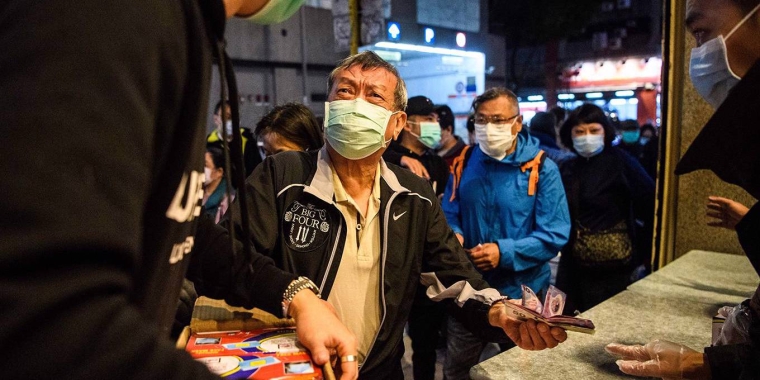 The coronavirus outbreak that began in the Chinese city of Wuhan has spread across the country and beyond its borders, leaving governments at all levels in China scrambling to limit further person-to-person transmission of the virus, now known as COVID-19. Wuhan, with a population of 11 million, is under lockdown.

Many provinces have postponed the resumption of work at non-essential enterprises following the Chinese New Year holiday, with residents instead staying indoors in barricaded neighborhoods.

Much inter-city and inter-provincial transportation has been halted. And some local governments have even established illegal checkpoints to prevent vehicles carrying industrial products and materials from entering areas under their jurisdiction that contain factories.

Clearly, the outbreak and the extraordinary official measures to contain it have hit China’s economy hard. No one yet knows when the authorities will manage to overcome the epidemic, and what the eventual cost to the economy will be. But the Chinese people have, once again, shown courage and solidarity in the face of a national emergency. There is no doubt that China will win the battle against COVID-19.

When the severe acute respiratory syndrome (SARS) virus hit the Chinese economy in the spring of 2003, everyone initially was pessimistic about the outbreak’s likely economic impact. But as soon as the epidemic was contained, the economy rebounded strongly, and ultimately grew by 10% that year. China is unlikely to be that lucky this time, given unfavorable domestic and external economic conditions. So, with the deadly coronavirus still on the rampage, the Chinese authorities must prepare for the worst.

Policymakers should respond to the current crisis in three ways. Their first priority must be to rein in the epidemic no matter what the cost. Because markets cannot function properly in emergencies, the state must play the decisive role. Fortunately, China’s administrative machinery is functioning effectively.

At the moment, one of the most serious economic obstacles is the interruption to transport caused by fearful local governments. While recognizing local officials’ legitimate concerns about preventing the further spread of the virus, the central government must now intervene to facilitate smooth flows of people and materials, thus minimizing supply-chain disruptions.

Second, the government should devise ways to help businesses survive the crisis, focusing in particular on small and medium-size services firms. While being careful not to create undue moral hazard, the government should cut taxes, reduce charges, and compensate hard-hit enterprises generously. It also should consider establishing pandemic insurance funds so that society as a whole can bear businesses’ virus-related losses.

Moreover, commercial banks should strive to ensure that there is no shortage of liquidity, including by rolling over loans to troubled enterprises and allowing them to postpone repayment. In addition, policymakers may need to resort to market-unfriendly measures such as targeted lending and moral suasion to steer the allocation of financial resources, as well as possibly loosening some financial regulations.

Third, the authorities should pursue more expansionary fiscal and monetary policies, even if such measures per se are not aimed at offsetting the negative impacts of supply-side shocks. The People’s Bank of China should continue to lower interest rates as much as possible and inject enough liquidity into the money market. Although inflation has risen as a result of supply-chain disruptions and may yet climb further, tightening macroeconomic policy at this point would be counterproductive.

Likewise, although the government is unlikely to launch large-scale infrastructure investment projects before COVID-19 has been contained, the general budget deficit may nonetheless grow, owing to the epidemic-related increase in spending and decrease in tax revenues. In its fight to control the virus’s spread, the government should not worry too much about whether the budget deficit exceeds 3% of GDP.

The battle against the coronavirus undoubtedly will be very costly, and will reverse some of the Chinese authorities’ recent achievements in reining in financial risks. For now, however, any potential problems related to debt, inflation, or asset bubbles are secondary. Policymakers can worry about them once the situation has calmed down.

Late last year, I sparked a heated debate among Chinese economists by arguing that the country’s policymakers should not allow annual GDP growth to slip below 6%, because expectations of a slowdown are self-fulfilling. In the light of the coronavirus outbreak, I concede that the 6% growth target must be reconsidered. But even if the epidemic lowers growth in 2020 by, say, one percentage point, this probably would not negatively affect people’s expectations, because the slowdown would be the result of an external shock rather than some inherent weakness in the economy.

Chinese policymakers’ most urgent challenge is no longer how to stimulate aggregate demand, but rather how to ensure that the economy functions as normally as possible without compromising the fight against COVID-19. Sooner or later, however, the epidemic will be conquered, and the Chinese economy will return to a normal growth path.

When that happens, the question of whether China needs more expansionary fiscal and monetary policies to achieve an adequate level of growth will return to the agenda. And the rationale for a looser stance will still apply. In fact, to compensate for the losses arising from the COVID-19 outbreak, the Chinese authorities may have to adopt even more expansionary policies than I (and others) had previously suggested.

Yu Yongding, a former president of the China Society of World Economics and director of the Institute of World Economics and Politics at the Chinese Academy of Social Sciences, served on the Monetary Policy Committee of the People’s Bank of China from 2004 to 2006. Copyright: Project Syndicate, 2020, and published here with permission.

Melissa Chen is NY editor of the Spectator and runs Ideas Beyond Borders.

"" the Chinese people have, once again, shown courage and solidarity in the face of a national emergency."" Given the emperors they have had over the last 300 years they have had little choice. The alternatives have been death (~50m just with Mao's great leap forward, ~30m during the Taiping Rebellion, 35m dead and wounded during 2nd Sino-Japanese war) or emigration.
If ever a nation is overdue a decent honest government it is China.

A real emperor leads his warriors into the battle. Xi doesn't even have the balls to come down to Wuhan and talk to those exhausted doctors and nurses. He is hidding when the country needs him the most. What a bloody muppet.

For me, one thing is becoming clearer - the longer this situation drags on, the deeper the deception will go.
We could not trust any data from China beforehand, so we certainly cannot trust anything coming out now.
In that sense, nothing changes, but with the nature of this particular beast, possibly everything changes.

Does this change the way you view:

How should a community handle these china issues, separately, collectively or act as though china works the same way society here or in Australia does?

I hope that we see a change of leader in China after this. And a change in the direction of how the country is being run. It may solve a lot of problems for everyone.
If it does not happen this time he will keep digging the country into a deeper hole. Look at the messes that he is gotten into. Virtual revolution in Hong Kong. Trade war with the USA and a large loss of sympathy with most of the west who must now be looking for ways to untangle their economies from China. The totalitarian management of China may have worked in the past, but that will not last much longer with the younger, better educated and connected population. You can hear the rumblings already and at some point soon, the more the regimen tightens it's grip, the more the population will be motivated to revolt. Hard if not impossible to win that battle once it starts. How was the communist party founded?

I hope you are right about a change of govt if only for the sake of Falun Gong supporters, persecuted Christians and the indigenous population of Xinjiang. If it did happen and the people of China trusted the new govt then it could unlease the potential of the country. Just imagine China with a per capita wealth production equivalent to Taiwan or Singapore! That would more than match the USA plus the EU plus Australasia; it is sad to see such a hard working people held back by communist party cronism and incompetance.

Yes, you have the contrast.

How does the CCP explain to its people, explain how Taiwan got so much further ahead, in the same timeframe.

How do core political parties explain the change in relative position of NZ to:
Taiwan
Hong Kong
Singapore.

- they are not allowed to blame the electorate.
What would their list of 3 things be?

Hong Kong & Singapore great locations for trading.
Taiwan desperation of populace.
Now ask our two major parties why is our GDP per capita behind most OECD countries (eg France, Denmark, Sweden, Finland, Germany, Austria, Switzerland, etc) but we work longer hours? Wasn't like that when I was born.
My guess too many POMs like myself followed by too many from everywhere but generally without exceptional talent and no new resources in NZ to be exploited. We have copied the policy that worked well in Victorian times (OK didn't work well for Maori) but not realised it doesn't work now.
Same resources with fewer people and NZ would be wealthier per person.

China is in huge trouble demographically - a couple of reports from SCMP over last year have shown compelling evidence that they have been vastly overstating their birth rates for decades, and that they likely have 20-30% fewer children than claimed and about 120million fewer people than claimed. Half as many 5 year olds as 50 year olds will weigh very very heavy on their economic development - similar low birthrate issue to Japan and Korea but without the high economic starting base.