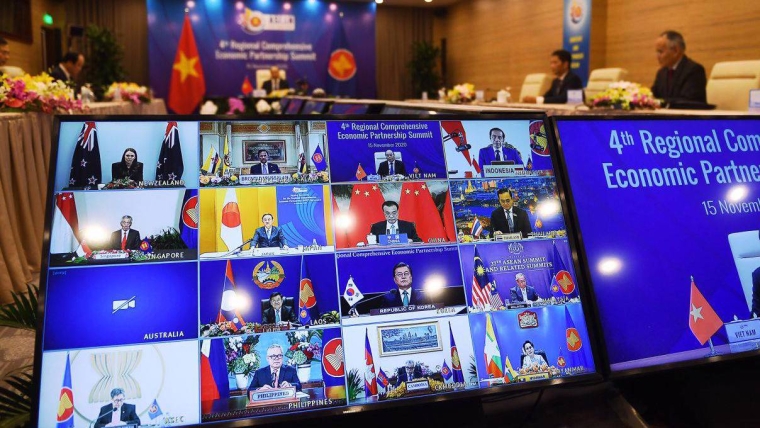 Last month, 15 Asia-Pacific countries signed the Regional Comprehensive Economic Partnership. The occasion marked what might be the most significant economic achievement since the COVID-19 crisis began. And yet the RCEP – or, indeed, Asia – cannot save the ailing multilateral trading system alone.

To be sure, the RCEP is a firm repudiation of the protectionism that has been gaining ground in recent years. Economic integration is very difficult in the Asia-Pacific, owing to widely varying levels of development, diverse cultures and institutional structures, and ongoing territorial disputes. But, confronted with the COVID-19 downturn, the parties were eager to conclude the pact, after eight years of negotiations.

And this is no minor trade bloc. Signatories include China and Japan – the world’s second- and third-largest national economies, respectively – as well as South Korea, Australia, New Zealand, and ten Southeast Asian countries. The RCEP thus accounts for 30% of global GDP, making it the world’s largest free-trade area.

But the RCEP has its limits. It lacks rules to protect the environment and workers, and the tariff reductions it demands are not as large as the ones required by the other big Asia-Pacific trade agreement, the Comprehensive and Progressive Agreement for Trans-Pacific Partnership (CPTPP), which includes seven RCEP members. As a result, it will not bring major economic benefits, even for participating countries.

The RCEP’s real significance lies in China’s participation. It is the first regional multilateral trade agreement the country has joined. And, as a major consumer, China is essential to strengthen regional value chains, thereby increasing RCEP members’ ability to reap the benefits of integration.

But a major regional economy, India, refused to join, owing to concerns about larger trade deficits with China and the inability to protect weak industries. India’s inclusion would significantly increase the deal’s economic benefits, not only because of the size of its market, but also given its position in services supply chains.

The RCEP remains “open for accession by India, as an original negotiating State, from the date of its entry into force.” But signatories should go further, creating incentives to induce India to join.

With or without India, however, the RCEP will not revive multilateralism. On the contrary, despite reflecting an appetite for trade liberalisation, the proliferation of regional trade blocs could weaken the multilateral trading system, because they necessarily exclude non-signatories.

For Asian economies, which have secured their prosperity by participating in global markets governed by common trade rules, this should be a serious concern. And yet they can hardly revive the multilateral trading system alone. The rest of the world must contribute, with the United States leading the way.

Over the last four years, the US under President Donald Trump has waged war against multilateralism. It has rejected trade agreements and implemented protectionist policies, with China its primary target. It has also paralysed the World Trade Organization’s Appellate Body, which adjudicates trade disputes, by blocking the appointment of new judges to succeed those whose terms expired.

Biden has expressed a clear commitment to multilateralism. But he has also indicated that he will be tough on China. This raises serious risks for the RCEP and multilateralism more broadly.

Make no mistake: the Sino-American trade conflict that has unfolded under the Trump administration has been highly damaging, not only for both sides, but also for the rest of the global economy. For its own sake, the US must stop trying to limit China’s inevitable economic and technological rise, and focus instead on persuading the country to open its markets further and adhere to global rules and norms. This will be possible only if the US strengthens its relationships with allies and deepens its commitment to institutions like the WTO.

This kind of US leadership would also strengthen the RCEP, which, contrary to what one might assume, would not be bad for the US. Yes, the trade bloc will facilitate China’s efforts to expand its regional influence. And it is no coincidence that China announced the agreement – as well as its possible willingness to join the CPTPP – during the tumultuous dying days of Trump’s presidency.

But the RCEP is not a China-led economic bloc. As the World Bank’s Managing Director of Development Policy and Partnerships Mari Pangestu and the Australian economist Peter Drysdale have pointed out, “RCEP is an ASEAN conception of the regional order, not a Chinese initiative.” And most RCEP members – including Australia, Japan, South Korea, and many ASEAN members – are closer to the US, politically and militarily, than they are to China.

That is why the Biden administration’s China strategy is pivotal to the RCEP’s success. If the US escalates its trade and technology war with China, confrontation will become more likely among RCEP members, as exemplified by the current tensions between China and Australia.

But stability and prosperity in Asia are in America’s economic and strategic interest, not least because of the size of the markets involved. In fact, Biden would do well to consider joining a regional trade bloc, either the RCEP or the CPTPP, which can serve as a stepping-stone to comprehensive multilateral trade liberalisation.

Even if the COVID-19 pandemic ends soon, the world will be dealing with the economic fallout for a long time to come. US global leadership, in the form of a commitment to revitalise multilateral trade and economic cooperation, could go a long way toward easing the pain – and accelerating the recovery – for all.

Lee Jong-Wha is Professor of Economics and Director of the Asiatic Research Institute at Korea University. His most recent book, co-authored with Harvard’s Robert J. Barro, is Education Matters: Global Gains from the 19th to the 21st Century. Copyright: Project Syndicate, 2020, published here with permission.

Well as they say nothing is impossible when there is unity.