Alison Brook concludes New Zealand chose the right strategy when faced with the pandemic threat. The challenges will be different however when we try to navigate the post-pandemic realities. Will we still be a winner then?

Alison Brook concludes New Zealand chose the right strategy when faced with the pandemic threat. The challenges will be different however when we try to navigate the post-pandemic realities. Will we still be a winner then? 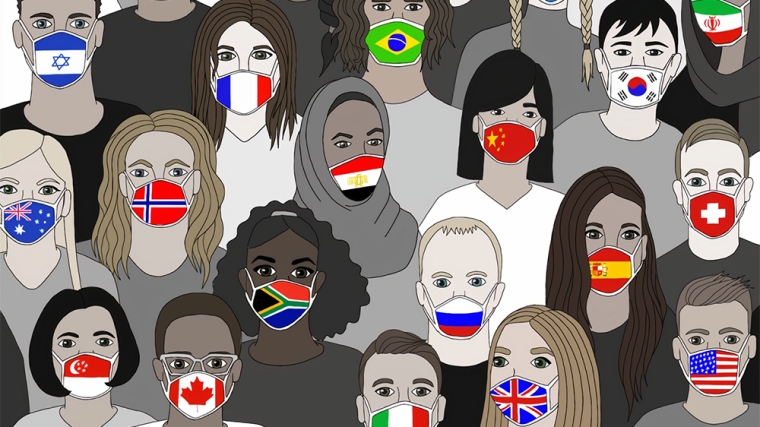 New Zealand’s economic rebound in the second half of 2020 is being hailed as a vindication of its COVID-elimination strategy. In the early days of the pandemic, there was a widely-held belief that countries needed to choose between protecting their population’s health or their economy. But have countries with lower infection and death rates seen a larger economic downturn?

Multiple studies from 2020 now suggest the opposite is true.

Countries that implemented a strict lockdown early in 2020 as cases began to soar have also recovered faster economically.

By contrast according to Our World in Data, those countries that experienced the most severe economic downturns such as Peru, Spain and the UK were among the countries with the highest Covid-19 death rates. As Martin Wolf of the Financial Times put it “Countries have followed two strategies: suppression, or trading off deaths against the economy. By and large, the former group has done better in both respects. Meanwhile, countries that have sacrificed lives have tended to end up with high mortality and economic costs.”

Those countries that successfully suppressed the virus early have since had the luxury, as in New Zealand’s case, of moving to shorter and geographically targeted lockdowns, generally accompanied by extensive testing and compulsory track/trace systems.

To save the economy, first, save lives

From purely a health perspective, we now know that lockdowns work. In an analysis of the data up to November 2020, The Institute for New Economic Thinking (INET) concluded “Strict lockdowns do work, and they work swiftly, within 4-6 weeks. They worked not only to suppress, but to virtually eliminate the virus in Australia, New Zealand, and Iceland, as well as in China, Korea, and Taiwan.”

It is also becoming evident that in order to protect the economy, public health measures should be implemented as soon as possible.

INET points out that those countries that moved quickly to suppress the virus are now reopening and growing their economies. Those countries who failed to act quickly suffered a double catastrophe as the pandemic raged out of control, which in turn increased the costs of dealing with it, impacting the overall costs to the economy.

The worst-case scenario though was in countries like the UK and the US who delayed their response and then prevaricated between different strategies. The impact on both their economy and their population’s health has been devasting.

Where to next for the economic recovery?

The global economic impact of the pandemic has been huge, estimated in one study to be in the realm of US$16 tln.

While all countries started from very different economic positions, the COVID-crisis has exposed and exacerbated existing structural weaknesses. As a result, the economic recovery is also likely to be uneven. The COVID-19 Economic Recovery Index measures the degree to which countries have the right policies and institutions in place to recover from the economic impact of the pandemic. The index ranks New Zealand 14th of the 122 countries studied.

Those countries that are in a better position to recover are more likely to score well in terms of food security, workforce adaptability and social security nets. They are also more likely to have a robust digital economy and a resilient financial system. Being open to trade plays a key role in recovery. New Zealand was immediately impacted by border closures and the global contraction, but it also means it is likely to recover faster.  New Zealand’s recovery will also be helped by the fact that around 84% of our exports are aimed at resilient markets.

Unsurprisingly, smaller countries other than China consistently performed better in terms of their COVID health response in 2020, with those of under 10 million people proving more agile.

The Lowry Institute analysed the effectiveness of the coronavirus health response of 100 countries in the 36 weeks following their hundredth confirmed case. New Zealand took the top spot, followed by Vietnam, Taiwan and Thailand. By contrast, the US and the UK, which have suffered badly from their failure to impose sufficiently strict health measures rank 94th and 66th respectively. 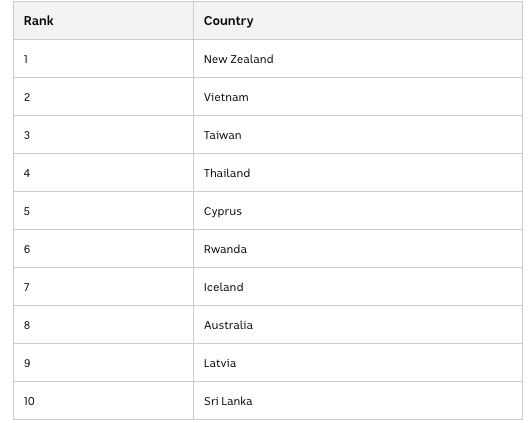 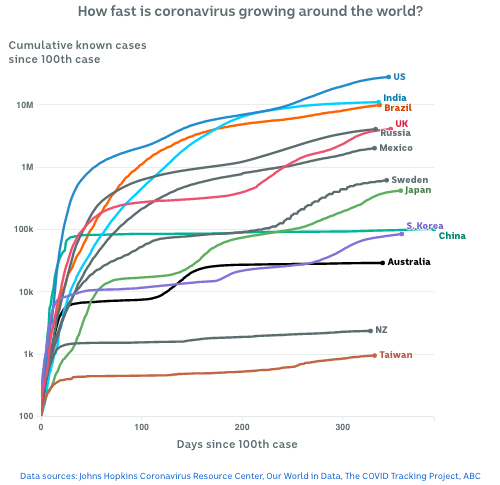 The small-size advantage, while initially helpful for controlling the virus, diminished over the course of 2020 and it is the big economies that will benefit the most from what PWC is calling “the great rebound”. The IMF predicts global growth of 5.5% in 2021 and 4.2% in 2022 driven by India and China.

From all the extensive data collected in 2020, it is now clear that the trade-off between the economy and health outcomes is not as real as we initially believed. Countries who acted quickly and decisively to protect their population health may have also avoided long-term scarring to their economies.

The challenge now will be for countries like New Zealand, which have successfully negotiated the immediate effects of COVID-19, to adapt to a very different post-pandemic world where almost every aspect of life and work has been impacted in both small and significant ways.

I think much of the economic impact is still obscured by the massive government and central bank interventions and "their" new debt all around the world. Time will tell how businesses and individuals will fare when it comes to paying for all this support, and whether and how earning and spending habits around the world will react. The aftermath might be even more painful than the health side of the pandemic?

This kind of article shouldn't be being put up, this late in the human trajectory. Firstly, it still clings to GDP - which essentially lies about our existential predicament, via omission/externalising. Worse, though, it mis-describes the energy-requiring physical throughput of resources (they call it 'consumption' but that fails to factor-in extraction and excretion). So they laud what is nothing more than a resumption of an unmaintainable rater of extraction/use/excretion.

Seems to me that they forgot to measure resources PER HEAD, and there seems to be a complete avoidance of Debt - which is tracking about 3x GDP, even as GDP fails to account properly. Meaning, even by their own flawed measure, things are going backwards.

This from a University - makes you wonder.....

I think NZ's position is not so good as the pandemic is expected to last up to 7 years.
Once we lift up two-week quarantine, overseas Covid is likely to come and we got an equal measure as the rest of world from Covid. Otherwise, NZ will be forgotten by the rest of the world.

I wouldn't read too far into the deaths or cases data so far, some countries have likely been more forthright than others in reporting statistics correctly.

Winners in the post-pandemic world will be those that can vaccinate first.

China & Russia are the first of those manage to do force vaccination, even with efficacy of their own Vax rated less than 60% (but hey, so does our annual Flu variant jab). Will they be the winner?
Sorry, just being philosophical, yin yang kinda - if there will be winners how many of them? how many looser? - Same logic apply to post cataclysmic modern warfare.. of Nuke, Chem, Bio..

"From purely a health perspective[?], we now know that lockdowns work." From a death perspective there are 30 odd papers showing lockdowns don't work and other factors have greater bearing. From the six counties the author lists four are islands that could shut their border, Korea didn't lock down, and, well, China.

"Higher Covid death rates are observed in the [25/65°] latitude and in the [−35/−125°] longitude ranges. The national criteria most associated with death rate are life expectancy and its slowdown, public health context (metabolic and non-communicable diseases (NCD) burden vs. infectious diseases prevalence), economy (growth national product, financial support), and environment (temperature, ultra-violet index). Stringency of the measures settled to fight pandemia, including lockdown, did not appear to be linked with death rate."
https://www.frontiersin.org/articles/10.3389/fpubh.2020.604339/full

"In summary, we fail to find strong evidence supporting a role for more restrictive NPIs in the control of COVID in early 2020. We do not question the role of all public health interventions, or of coordinated communications about the epidemic, but we fail to find an additional benefit of stay‐at‐home orders and business closures. The data cannot fully exclude the possibility of some benefits. However, even if they exist, these benefits may not match the numerous harms of these aggressive measures. More targeted public health interventions that more effectively reduce transmissions may be important for future epidemic control without the harms of highly restrictive measures."
https://onlinelibrary.wiley.com/doi/full/10.1111/eci.13484

Would be nice if more detail graphics showing how the printing money, subsidies directed into Healthcare response / preparation to the Pandemic comparison to other countries in the planet, but wait.. it's all there!
The stimulus for Wealth creation, in the hope it will trickling for the Healthcare spending... eek Not.
Everything that cost wise based stimulus in NZ were all in the end? trickling back to the OZ banks. Always ;-)

Headlines today, "Covid Kills". Yes, it kills the economy.
It hasn't really killed many people here unless you consider 26 in one year a large number compared to road deaths or suicides which are 3 digit numbers. What about anxiety and heart attacks?
I'll tell you what kills - Covid precautions! These casualties out-number the 26 by an order of magnitude.
NZ is not really a winner if 3 or 4 cases of a serious flu bug can be weaponized to effect the lives of millions.

This article is pretty fanciful. The long term economic impact on NZ will be severe because we've obliterated 25% of our GDP while at the same time massively expanding unproductive spending on quarantine hotels PCR testing, wage support etc. It's a national tragedy that the government debt is going from ~20 to ~50% of GDP with nothing to show. An analogy might be if your partner got duped into buying a $300,000 oil change for the car. Look honey the car is "safer" and our lives haven't changed. You cant put a price on safety, and the car hasn't crashed therefore the magic oil must have worked. Sweden which according to those graphs is doing badly actually has one of the lowest excess mortality rates in the whole of Europe. see here.