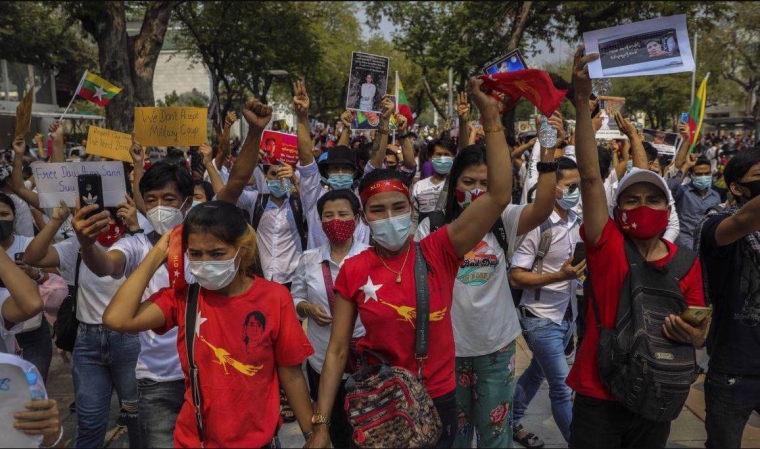 Myanmar is leading Southeast Asia’s race to the political bottom. Since overthrowing a civilian government on February 1, the military has killed more than 530 unarmed civilian protesters and arrested thousands more. Now, the country is confronting a deepening humanitarian crisis and the growing possibility of a civil war – developments that would have serious regional and even global consequences.

Myanmar’s civilian government, led by Aung San Suu Kyi’s National League for Democracy, may not have been perfect, but it had the people’s support. In last November’s election, the NLD won a strong majority against the military-backed opposition. Within weeks, the military, under orders issued by Senior General Min Aung Hlaing, had arrested Suu Kyi and other NLD ministers and declared a one-year state of emergency.

Myanmar has been here before, having endured nearly a half-century of military dictatorship and international isolation following the 1962 putsch and a bloody crackdown on pro-democracy demonstrators in 1988. But there is something different about this coup: no matter how freely the military beats and shoots civilians, the protesters’ movement – built on an exigent alliance between civilian authorities and armed ethnic groupings – will not submit.

That is not unambiguously good news, because the military junta also will not give up, no matter the cost, leaving little hope of salvaging Myanmar’s political liberalization, economic reform, and development progress during a decade of civilian rule. Instead, the country faces the imminent threat of economic collapse, state implosion, and internal strife – perhaps even full-fledged civil war.

Given Myanmar’s strategic location on the corridor linking the Indian and Pacific Oceans – sharing borders with China, Bangladesh, India, Laos, and Thailand – violent turmoil there could destabilize the entire region. Already, the crisis is shaking a pillar of regional order: the Association of Southeast Asian Nations, whose members are divided over how to respond.

In line with the principles set out in the ASEAN Charter, Indonesia, Malaysia, and Singapore have called for the immediate cessation of violence by the military in Myanmar, the release of Suu Kyi and other political detainees, and the restoration of democratic governance based on the results of November’s election. But other member states – particularly Cambodia, Laos, and Vietnam – prefer to emphasize ASEAN’s norm of non-interference in other members’ internal affairs.

It is no coincidence that ASEAN’s more democratic governments are calling for a response to Myanmar’s putsch, while its more authoritarian governments back a hands-off approach. This highlights the limits of regional integration involving different regime types.

ASEAN has historically avoided the pitfalls of ideological differences by focusing on common interests and objectives. When Indonesia, Malaysia, the Philippines, Singapore, and Thailand created the grouping in 1967, they sought a platform for mutually beneficial cooperation among countries that were united by geography, and by their eagerness for a geopolitical counterweight to their larger neighbors.

From 1984 to 1999, five members became ten, with the addition of Brunei Darussalam, Vietnam, Myanmar, Laos, and Cambodia further raising ASEAN’s profile as a means of empowering smaller states and supporting peace and prosperity. Today, ASEAN has a total population of 670 million (far exceeding the European Union) and a combined GDP of more than $3 trillion.

Alongside this growth, ASEAN sought to establish itself as a force for wider multilateral cooperation. In the 2000s, it acted as an anchor for the newly created Asia-Pacific Economic Cooperation, the ASEAN Regional Forum, and ASEAN+3 (China, Japan, and South Korea). And it has played a central role in high-profile meetings, such as the East Asia Summit, seeking to advance strategic dialogue and confidence-building goals.

Such activities helped to safeguard Southeast Asia from outside interventions like those that ravaged the region during the Cold War. The ASEAN Charter, adopted in 2007, built upon this success by providing a legal status and an institutional framework for the grouping that established a vision for shared security, increased economic prosperity, and stronger socio-cultural connections.

But, as the Myanmar crisis shows, countries with vastly different governance models will always struggle to cooperate in some areas. The same can be said of the broader international response to the coup. The United States and the EU have imposed targeted sanctions on Myanmar’s generals, though Asian democracies – such as India, Japan, and South Korea – are responding less assertively.

By contrast, China, Myanmar’s largest trade partner, has blocked a United Nations Security Council statement condemning the coup – a decision that has contributed to perceptions that it supports the junta. Pro-democracy demonstrators have burned down Chinese factories in Myanmar in retaliation. And yet, eager to avoid an all-out backlash, China has been guarded in its response.

Russia, which joined China in blocking the UN Security Council statement – seems to have even fewer qualms, perhaps at least partly because it is unlikely to suffer any geopolitical consequences from mayhem in Myanmar. Though the Kremlin has expressed some concern about the civilian casualties, it is also a leading arms supplier to the junta. And, in a recent statement, it touted plans to deepen “military and military-technical cooperation in the spirit of strategic partnership.”

Ultimately, Western sanctions are likely to have only indirect effects, especially as ASEAN dithers. The fight for Myanmar’s future will have to be won at home. That is a chilling prospect, because it implies that unarmed protesters will need to face down a battle-ready army. In the short term, it is difficult to see how Myanmar will avoid much greater bloodshed.

Thitinan Pongsudhirak is Professor and Director of the Institute of Security and International Studies at Chulalongkorn University’s Faculty of Political Science in Bangkok. Copyright: Project Syndicate, 2021, published here with permission.

Let's face it. The West doesn't care about Myanmar, least of all the UK who have abandoned the country after independence. China has cornered the resources and it's easy to speculate that they're indirectly supportive of the junta.

Yes it is the ugly side of humanity and it seems to keep repeating it self. the sad part is that there are many leaders with similar aspirations.

UK absolutely disastrous administration leading up to WW2. The Burmese, to go back to that time, were already escalating insurgency when the Japanese marched in.

China actually did not get along with the old military regime very well. After democratisation of Myanmar, relations and trade improved significantly between the two countries. In addition, any destabilisation on China's border is a major risk for them.

So it's highly unlikely they would support the junta.

It is time to dump the UN and replace it with a group not dominated by a handful of nations. If they do not like it tough. The bullies of the playground should be ignored and shunned. That way their power will be greatly diminished.