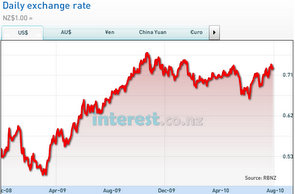 The NZD was the weakest performing currency last week.

Having hit a 6-month high of almost 0.7400 on Tuesday, the NZD/USD spent the rest of the week drifting lower. US dollar weakness was the overriding theme in currency markets last week. Not only did ratings agency Moody’s highlight the risks to the US Government’s AAA rating, but recent US data remain consistent with a clear slowing in economic momentum.

Friday’s GDP data was an immediate example, revealing economic growth slowed from 3.7% to 2.4% in the June quarter (2.6% expected).

Sliding US bond yields dragged the USD lower, providing a boost to most of the major currencies.

Indeed, the USD index ended the week down 1.1%. Nevertheless, a more cautious assessment of the NZ economy from the RBNZ knocked some of the steam out of the NZD last week, despite the expected 25bps rate hike being delivered.

Not only did the RBNZ lambast the NZD’s recent gains as “inconsistent with the softening in NZ’s economic outlook”, but its admission that “the pace and extent of further OCR increases is likely to be more moderate” pulled some of the yield support from under the NZD.

NZ-US 3-year swap spreads fell below 320bps (from around 330bps at the start of the week) helping drag the NZD below 0.7300. June quarter employment statistics take centre stage this week.

Thursday’s HLFS will help clarify whether the big fall in the unemployment rate in Q1 was real, or partly technical. We believe it was a bit of both, and so we have the jobless rate reversing back up a bit to 6.3%.

The week also has important commodity price data. Fonterra’s Wednesday morning (NZT) auction will be closely watched, to see if last month’s 14%m/m price drop was the start of a trend or simply a shift. Ahead of this, today’s ANZ commodity export price indices are expected to be slightly softer in world price terms.

The weekend’s economic news (yes there was some) helped allay fears about a sharp slowing in Asian economic growth. The Chinese PMI for July held up at 51.2 (51.4 expected), and South Korean trade data showed exports surging ahead almost 30%y/y. We suspect “growth-sensitive” currencies like the NZD will find some early support this morning as a result.

Looking ahead, we suspect some consolidation is likely for the NZD this week. While momentum is still positive, a break above resistance at 0.7440 looks a bridge too far in the short-term. Not only are we wary of disappointment from this week’s local data, but further substantial declines in the USD look unlikely in the near-term. Solid support is eyed on dips towards 0.7120.

The USD weakened against most of the major currencies on Friday. On a trade-weighted basis, the USD index ended the week down around 1.1%. Friday’s GDP figures revealed US economic growth slowed to a 2.4% annualised pace in Q2, from 3.7% in the first quarter. Analysts had forecast a 2.6% result.

The disappointing data tended to reinforce expectations the Fed will keep interest rates near zero well into 2011, given tepid US growth is unlikely to make any significant inroads into lofty US unemployment this year. US 10-year government bond yields fell 8bps to 2.9%, while 2-year yields slumped 3bps to 0.55% – a fresh all-time low.

Despite encouraging readings from the Chicago PMI (62.3 vs. 56.0 expected) and University of Michigan consumer confidence (67.0 vs. 68.8), worries about the strength of the US recovery and reduced yield support dragged the USD lower. USD/JPY hit a year-to-date low of 86.00, putting markets on alert for possible Bank of Japan intervention.

Month-end USD selling by real money accounts (as hedges were re-adjusted in light of July’s 8% gain in global equities) also provided a boost for the likes of AUD, NZD, CAD and GBP. The latest Chinese PMI was released on Sunday.

Despite rumours to the contrary, activity in the Chinese manufacturing sector held up in July. The PMI eased only slightly, from 52.1 to 51.2 (51.4 expected). South Korea also released trade data on Sunday that showed exports rising 29.6%y/y, faster than the expected 26.9% pace. Evidence that growth in Asian economies remains on a solid footing should ensure “growth-sensitive” currencies like NZD and AUD start the week on the front foot.

The week ahead is packed full of event risk. US data looks set to remain in the spotlight, given recent evidence of a clear slowdown in underlying activity. In this regard, keep an eye on tonight’s ISM manufacturing survey, Tuesday night’s pending home sales and, of course, Friday’s non-farm payrolls release.

We don’t think the US economic outlook is as bad as market pricing currently suggests, but more ‘bad’ economic news could see US bond yields and the USD continue to fall near-term. Central bank meetings will also be in focus this week. Policy announcements from the Bank of England and ECB on Thursday should be fairly uneventful. More attention will be on the RBA on Tuesday, for any hint of a tightening bias. Market pricing is consistent with no change in rates.