US economic recovery to be slow and patchy; Aussie bank risks biased on the downside

US economic recovery to be slow and patchy; Aussie bank risks biased on the downside
7th Sep 11, 4:08pm
by Guest

The S&P downgrade of the US government from AAA caused a rapid flight to safety out of equities and credit, and into government bond markets. A resolution to the European sovereign crisis remains elusive.

Simmering problems in Europe and the US finally boiled over at the beginning of August, threatening a firestorm in risky assets, and leaving panicked global investors scurrying to the safety of government bonds. S&P’s decision to downgrade the US government from their AAA rating proved the final catalyst that set off the most dramatic period in markets since the eye of the GFC storm in late 2008.

S&P’s decision was not about the chance that the US government would default on its outstanding debt. Unlike Europe, the US has its own currency, so could always print more money to pay its debts (all issued in USDs); and they have the privileged position as the world's reserve currency so plenty of investors are obliged to hold US dollars. Rather, S&P’s decision was designed as a wake-up call to US politicians to get their fiscal house in order, and not take advantage of their position at the centre of the financial system.

Set alongside a background of the European sovereign crisis and stalling US macroeconomic data, the S&P downgrade created a sense of panic in all risky asset classes.  It reminded jittery investors that the developed world is going through a weak patch as it recovers from the excesses of the last decade. An extremely low reading of the Philadelphia Fed’s PMI Manufacturing index (which turned out to be a poor reading on nationwide ISM index) poured fuel on this fire. And financial institutions were put under the spotlight as markets opened their playbooks from 2008 and began to guard against the closure of interbank funding markets. 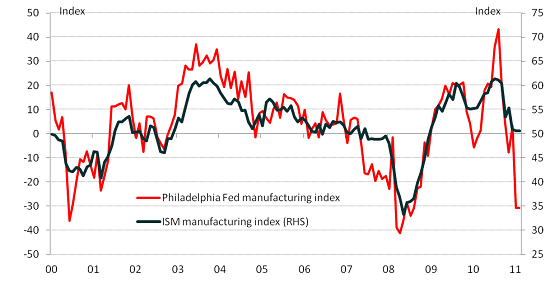 Ironically, investors flocked to the safety of the very asset that had been downgraded. The US 10 year government bond yield fell from (an already low) 3% to under 2%. In around a week, the bond market had gone from expecting a slow and patchy recovery, to pricing in a lost decade of little or no growth or inflation – a process that took years to be priced in Japan in the 1990s (see Chart 1). New Zealand government bond yields were dragged lower with global developments, with the 10 year yield falling from around 5.10% to below 4.50%.

This dramatic flight to safety saw credit spreads widen sharply, with US and European financial institutions coming under the most intense pressure. For much of 2011, New Zealand and Australian credit markets have been relatively insulated from bouts of risk aversion linked to developments in the European sovereign crisis.  But August saw global credit markets take the strain together. The Australia iTraxx index spiked to 170bp, from its range of 110-120bps, with CDS premia on Australian banks increasing most. In New Zealand, credit spreads on senior local bank paper were marked 10-15bps wider. Foreign bank issuers in NZDs were hardest hit, with spreads 50-80bps wider. 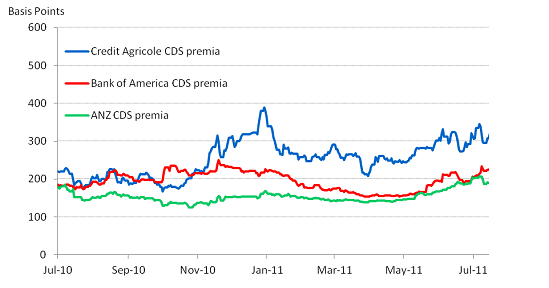 After solid CPI and GDP numbers back in July, the RBNZ had looked set to raise their Official Cash Rate (OCR) from 2.50% in September. But global developments have quickly pushed back market expectations. More dramatically, market pricing has shifted from expecting the RBA’s next move to be raising its official rate by 25 basis points, to expecting them to cut by nearly 150 basis points in less than 9 months.

Ongoing challenges in the US and Europe continue to create an environment where core government bonds will be supported by bouts of flight to safety.

While out of the spotlight in August, the European sovereign crisis continues to unfold, and any definitive solution must navigate a political minefield. We expect this to be a focus over September. Likewise the US looks set for a modest economic recovery, as the deleveraging process continues. And the US Federal Reserve is contemplating the need for more Quantitative Easing to keep long-term yields lower for longer. These factors are all supportive for New Zealand government bonds, especially given New Zealand relatively strong fiscal starting point and determined plans to return to fiscal surplus.

However, while we are expecting the US economic recovery to be slow and patchy, we do not believe that the US is entering a lost decade to rival the experience of Japan. So if US government bond yields fall sharply, and move further out of line with New Zealand, this will act as a signal to shorten duration (and reduce our exposure to a sharp rise in bond yields).

At the short-end of the yield curve, we believe that both the NZ and Australian fixed income markets have focused exclusively on developments in the US economy and financial system, at the expense of information on their own domestic economies and main trading partners.

In the case of NZ, retail sales, business and consumer confidence, commodity prices and building permits have all come in at solid levels during August, and surveys of inflation expectations remain stubbornly high. So while, we are not expecting the RBNZ to raise interest rates at their September meeting, we think the market is underestimating the need for them to get on with things once the threat to the international financial system settles. In that respect, in their upcoming Monetary Policy Statement, the RBNZ would do the market a service by setting out the facts in an impartial way and putting global developments in proper context.

In the case of Australia, the domestic economy has evolved much as expected over the month, with a continued divergence been a strong resources sector and a subdued household sector. While the RBA may no longer need to hike interest rates, we believe the market is overestimating the need for the RBA to cut interest rates as aggressively as market pricing suggests.

In credit markets, we are expecting global credit spreads to correct back from the peaks they reached at the height of market fear in August. So we can see good opportunities to lengthen credit duration on solid credits. As credit markets calm, we will continue to assess opportunities to work down our holdings of subordinate and perpetual debt in the NZ Corporate Bond Fund, to further reduce its volatility.

The New Zealand company reporting season was the most solid for over 5 years. On a three to one ratio New Zealand companies reported better than expected earnings and had upgrades to the outlook for earnings. Domestic sales and margins were highlights and a number of companies specifically mentioned their expectations to benefit from either the Rugby World Cup or the Christchurch rebuild – the two key catalysts for New Zealand economic growth.

We continue to lift exposures to New Zealand names and hold an overweight in resources and energy. Specifically we expect investors to gradually upgrade earnings expectations for iron ore in particular – that is why we have added Rio Tinto to the portfolio (over 75% of Rio’s earnings come from iron ore). BHP and Rio Tinto remain the lowest cost producers of iron ore. Fletcher Building looks well set to benefit from the rebuilding of Christchurch and a more gradual lift in New Zealand residential building activity. The government have revised up sharply the residential rebuilding costs – and overall some estimates of the total rebuilding costs have lifted from $15bn to over $20bn.

In our view the tail risks of further European bank sector stress remain, and coupled with slow Australian credit growth and falling Australian house prices – the headwinds for Australian financial shares remain. That isn’t to say that Australian banks look expensive – they probably don’t – but the risks still seem biased on the downside.

============
Christian Hawkesby is the Director, Head of Fixed Income at Harbour Asset Management