Opinion: China's growth will dominate NZ's economic future, but its renminbi may not replace the US$ any time soon

Opinion: China's growth will dominate NZ's economic future, but its renminbi may not replace the US$ any time soon 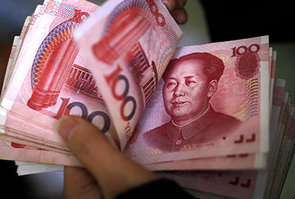 Our economic future is clearly in the China camp so we should care a lot more about the relationship between our currency and the Chinese Renminbi or yuan.

Yet most people in business or investing, let alone importing and exporting, would struggle to say what the rate is or to have even traded it. This week the New Zealand dollar will buy around 5.3 Renminbi, not that you'd know it because it's hardly ever reported or shown in bank windows. (Although we do measure it daily and include it in the interactive chart below)

The Chinese Renminbi is a strange beast. It is not easily convertible and has essentially been pegged to the US dollar at various rates for years.

Many believe China has set the value of its Renminbi at an unrealistically low level against the US dollar to help boost its exports and build up massive trade surpluses. The proof of that has been China's rapid accumulation of US$3 trillion worth of foreign reserves since 2005. It is still building up reserves at a rate of around US$400 billion a year, which shows it is still undervalued.

But all this is changing, albeit slowly. China has allowed the Renminbi peg to crawl around 5% higher per year against the US dollar since 2005. China is starting to use this appreciation to help reduce inflationary pressures.

It is also moving to 'internationalise' its currency by encouraging Chinese importers and exporters to invoice in Renminbi. About 10% of Chinese imports are now invoiced in Renminbi and this is expected to more than double over the next couple of years. The pace of growth since this invoicing started in 2009 is startling.

China needs to create large and liquid markets in Renminbi-denominated securities to really boost the use of the currency. China has quietly allowed some banks in Hong Kong to start issuing 'Dim Sum' bonds in Hong Kong on behalf of various companies. Fonterra was the first New Zealand company to issue these bonds. It raised NZ$56 million worth of Renminbi through a three year bond issue yielding 1.1% in June. See more here in Gareth Vaughan's article.

ANZ, which has followed a strategy of expanding in the Asian region under CEO Mike Smith, completed the first Renminbi trade deal by big 4 bank between a New Zealand company, NAC Trading Ltd, and Chinese buyers in January. See more here in ANZ's release on that.

China and Britain also announced this week they would develop a trading hub for Renminbi in London, which is the world's biggest foreign exchange trading centre. See more here at Reuters. Germany is also pushing for the Renminbi to join the International Monetary Fund's (IMF) Special Drawing Rights programme, which some believe could eventually serve as an alternative as a reserve currency to the US dollar. See more here at BusinessInsider.

This issue of a reserve currency is at the heart of the tension between China and America and is something New Zealand should watch. Even though the size of China's economy is expected to pass America's by 2020 at current relative growth rates, most believe the US dollar will remain the reserve currency for much longer.

That's because America has the most liquid and sophisticated financial markets with enormous amounts of bonds on issue. China's government would need to borrow heavily to match America, which it doesn't need to do.

But the real reason the Renminbi won't become the reserve currency that shows up as the main one to watch in our bank windows is China doesn't trust financial markets or outsiders. See Arthur Kroeber's piece at Foreign Policy for more background.

Rightly, many would say, it wants to retain the ability to use its currency to grow its economy and doesn't want foreigners messing around in the bowels of its financial system.

For now then, we should get used to the Renminbi being a quietly undervalued currency that we hardly use or see. But China itself will become increasingly important and a heavy buyer of foreign assets, including those based in New Zealand, as it tries to diversify away from its reliance on the US dollar.

USA vs China - and it isn't a friendly game.

In November 2008, a month and a half after the banking crisis led to the bankruptcy of Lehman Brothers and the sale of ailing institutions such as Merrill Lynch and Wachovia, CCB chairman Guo Shuqing met with U.S. Ambassador Alan Holmer, who served as a special envoy to China for the U.S. Treasury Department from 2007 to 2009.

At the time, U.S. banks were desperate for capital to absorb losses from mortgage-related investments and rising loan losses. But no Chinese investments were made, apparently because it would have opened the Chinese banks to regulatory scrutiny in the United States

They might be trying to let the currency rise to fight inflation, but June CPI was 6.4% in China - and 14.4% in food according to marketwatch

To be a reserve would require an open,  transparent, liquid market -- which doesn't equate to despot communistic central controlled government.