Opinion: Bernard Hickey argues the RBNZ should target non-tradable inflation to deal with a structural flaw that tilts our economy away from exporters

Opinion: Bernard Hickey argues the RBNZ should target non-tradable inflation to deal with a structural flaw that tilts our economy away from exporters 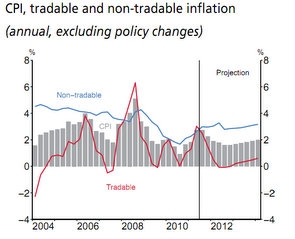 The Reserve Bank’s unsurprising decision to hold the Official Cash Rate at 2.5% has exposed in more detail a structural flaw in the New Zealand economy.

Under its current framework of inflation targeting with a free-floating exchange rate, the Reserve Bank has no choice but to force or allow the export sector to do the heavy lifting of keeping inflation under control.

It admitted as much today when it said it could keep interest rates around 60 basis points lower than previously forecast over the next two years because a structurally higher exchange rate was helping it to control overall inflation.

That’s great news for borrowers, spenders, voters, politicians, council bureaucrats and importers. It is appalling news for savers, producers, exporters and, ultimately, workers in the long term. That’s because we will ultimately rise or fall on our ability to create high value jobs from exporting.

It’s clear now that over the last decade the export sector has taken the pain of a high currency and relatively higher interest rates, while central and local governments, along with monopoly industries such as power generation, have increased prices and gobbled up a greater share of the economy.

Along with a structurally low to non-existent savings rate, this has meant that our monetary policy and exchange rate regimes have tilted our economy towards the non-tradable sector. That has meant more jobs for people in government and the monopoly industries and less jobs in the productive sector.

Ultimately this is not sustainable.

At some stage foreign creditors will realize we cannot sustain the high current account deficits needed to keep this creaky framework shuffling along.

One solution would be for the Reserve Bank to target non-tradable inflation rather than overall inflation.

There’s a good argument to say it cannot influence tradable inflation, which is determined by world prices and the currencies. Whereas monetary policy can have some influence on prices and activity inside the economy.

We have to find a way to break this logjam where every time the economy heats up the Reserve Bank increases interest rates, which pushes the currency up and hammers exporters.

Eventually there’ll be nothing left to sell and the foreigners won’t let us borrow more.

How would this compare to fixing the exchange rate to a basket of currencies as a thought to achieve a similar outcome for exporters?

It's nice to see we still have commentators such as BH that have retained the ability to think for themselves and look at original solutions to what are very real problems which are glossed over as non issues by the vast majority of so called economic experts.

The day will come when the reef fish will turn and our massive foreign obligations which can only be serviced or repaid  by exports or asset sales will be exposed for what they are.

Borrowed money on borrowed time and the RWC will not save us.

This is the country's Achilles heel. My rates in Nelson have gone up at over 11% pa compounded since 2004.

Personally I think we should target the going rate of world currency devaluation as our own inflation rate. We do this by adjusting the OCR and by buying a tonne of gold a day when the currency is above US 80 cents.

It all seems pretty simple to me, but then I am a simple fellow.

All well and good to point out the failure of the ocr as a tool...try explaining an answer. There isn't one. Not short of ending the floating Kiwi$....fat chance of that.

The best answer BH is for the RBNZ to drive inflation down to below 1%....ooops...they won't be allowed to do that because the govt wants the Kiwi$ debased.....

Very low inflation means very little chance of fat FX gains to be had...so bugger all trading of the Kiwi$....Look at the girations over that last few months...that's pig heaven to JKs old mates.....

Hi BH, thought provoking topic.   The current account def has been poor for all my life (and I am no spring chicken).  Using the OCR to target inflation is a blunt instrument and may have its uses when growth is +4% but we are in a catch 22 economic cycle, were as you point out inflation is being driven by (power, rates, food, insurance, phone, petrol, rent, etc) and not by asset or wage growth.  Raising the OCR will not control (power, rates, food, insurance, phone, petrol, rent, etc) and in fact will just increase rents and mortgages constraining any disposable income (which I argue is not available to the majority of consumers and is leading to more people living on debt).

Overall effect if RBNZ raises the OCR is to crash the economy.  I hear it all the time, what we need is to produce highly profitable, low cost exports but I see nothing on the horizon that will do this for NZ.  Rural sector exports are o.k but they are resource utilisation inefficient (high cost, low profit) and are doing o.k at the moment due to high demand.

This won't last and then we will have no internal growth, inefficient export growth, high borrowing costs and high NZ$ and high debt levels.  This is a recipe for disaster.

Nothing  under the political framework we have.  What we need to do is restructure NZ and it will be hard on everyone and the party that does it will not win another election for a decade.

Possible 20 year plan:  Low flat income tax rate 10%, transaction tax 1% on every transaction.  Capital gains tax 10%.  No tax breaks for anyone, businesses or trusts.  All benefits stopped and all money used in education, R&D, trade training.  Health care free.  Tax cigarettes and alcohol so much that it is to expensive to buy (ban advertising for them).  Any unfortunate people how do not have work then either train or government/local councial work (there is always plenty of work) paid with a voucher system.  All R&D and University grants have to be reapplied for and must show an economic benefit to NZ economy (must make money or no grant).  Plenty of natural resources so invest in extracting it and then invest in plant and machinary and manfacture cars, boats, ships, heavy trade vehicles (if Japan can do it and they have virtually no natural resouces then we can do it).  Why not import the japanese or korean etc industry workers to NZ so they can assist and train us.  No more treaty claims, all finalised then replace the treaty with a constituion and become a republic........  I could keep going but you get the picture.

NZ needs to do something different because it will all end in tears if we don't.

Bernard...  This article does not make much sense to me.

Can u explain your definition of what inflation is and how it manifests..?????

"Under its current framework of inflation targeting with a free-floating exchange rate, the Reserve Bank has no choice but to force or allow the export sector to do the heavy lifting of keeping inflation under control.".....   No... The Reserve Bank has used the Deflationary effects of Globalization to mitigate the inflationary effects of excessive Money supply growth   N nNN    No

"Along with a structurally low to non-existent savings rate, this has meant that our monetary policy and exchange rate regimes have tilted our economy towards the non-tradable sector. That has meant more jobs for people in government and the monopoly industries and less jobs in the productive sector. This has nothing to do with Monetary policy nor the exchange rate....   try saying ..."30 yrs of Govt that doesn't care about  the manufacturing and productive sectors.... especially the Clark Labour Govt. "

It is not just exporters.... It is many of the local manufacturers and producers that have closed down here and shifted their manufacturing to China... They are now importers....  The losses  have been  jobs, intellectual property, and an impact on our terms of trade....    This all adds up.

"The Government and the Reserve Bank must take ownership of the overvalued exchange rate say the New Zealand Manufacturers and Exporters Association (NZMEA). It is not acceptable just to decry the effects of a high New Zealand dollar. Other countries are taking action and it is long past time for our policy makers to the same.

NZMEA Chief Executive John Walley says, “There was some talk at this morning’s Monetary Policy Statement about Swiss intervention to reduce their currency, whether non-tradable inflation would be a better target for the Reserve Bank and on additional tools that could be used. Unfortunately we see no action and the resulting decline in the tradable sector.”

“The Swiss said what they would do and got on with it; to date it has worked. A firm commitment from the Reserve Bank to target domestic inflation would immediately see the dollar fall. Currency traders know that another tool would have to be used as interest rates don’t work against domestic inflation.”

“Reserve Bank Governor Alan Bollard freely admits that a high exchange rate is keeping inflation down – this has been happening since 2005 and it is no surprise that the same point marked the beginning of the tradable sector’s decline.”

“The Statistics New Zealand Survey of Manufacturing released this week shows the same trend; added value exports to the United States and Europe are becoming less and less viable.”

“A future relying on raw material exports is a low growth and low wage future. The Government and the Reserve Bank need to work together to find a solution.”

Talk about jumping the shirk ...

How would the RB target non-tradeable?

It is up to the government to control rates, electricity compliance costs and costs of dealing with government departments eg passports- anything really. They have let these sorts of costs go up and up as a form of indirect taxation under Labour. But all they do is make us less and less competitive

For a government that prides itself on being good for the economy, I think their performance is actually pretty poor, the only thing they seem to be good at is borrowing money.