The Greeks may have invented finance but they are spectacularly bad at managing their own financial affairs. Jason Krupp tallies up the times they went bust. It's a long history

The Greeks may have invented finance but they are spectacularly bad at managing their own financial affairs. Jason Krupp tallies up the times they went bust. It's a long history 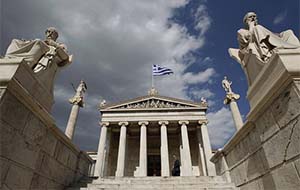 Philosopher George Santayana’s quote about those who ignore history are doomed to repeat it is somewhat of cliché, but only because it is damned applicable. But if there is one situation where it seems to be most apt it is with Greece and its debt crisis.

You see, this is not Greece’s first messy default, or the second, or the third, or ... actually it might be useful to start at the beginning for the sake of brevity.

As noted by Joshua Brown of thereformedbroker.com, the Greeks may have invented finance but they are spectacularly bad at managing their own financial affairs.

In 6 BC, for example, many Greek farmers were forced into slavery after defaulting on their debts, having used their personal freedom as collateral. The problem got so severe that the poet Solon was called in to fix the mess, which he did by devaluing the currency, forgiving debts, and buying citizens out of slavery.

Over 200 years later the Shrine at Delphi and its Temple of Delos had to take an 80% writedown on a loan to 13 city states after many of them failed to repay their debts. Indeed, the reputation of the Greek city states was so bad they refused to lend to each other, choosing instead to lend to wealthy citizens from the respective states, who were more reliable debtors.

Unfortunately this poor track record does not end in antiquity.

Since 1830 the country has defaulted on its debts five times. Indeed, the only two countries that have defaulted more often are Ecuador and Honduras. To quote Brown: “To a person with any historical awareness, being told that Greece is on the verge of a default is like hearing Dean Martin is on the verge of a martini”.

More recent Greek history is littered with financial irregularities and fudges, which allowed them entry into the Eurozone but set in motion the crisis that we see today. These include rampant tax evasion, currency manipulation, and misrepresentations of the true debt position in order to pay for the nation’s spendthrift ways.

A Greek default is inevitable and no bailout can prevent that. But so too is the next one after that, and the next one, and so on if history is anything to go by.

But is it really anything to be that alarmed about? After all, it appears the Greeks are really good at it.

*Jason Krupp is a research fellow at the New Zealand Initiative.

Greece will become more of a geo-political story than financial.
If Greece partners with Russia, China and Iran etc, then Israel will be getting ready as Greece is a gateway to the MiddleEast. Already tens of thousands of Iranian troops are beginning to control Syria, with groups 6 miles from Israel, also moving in to control Iraq/Isis with the U.S. quiet approval. Tsiparis is very pro-Palestinian & may use this as a lever for world sympathy/support.

A 2nd Lehman-type collapse may be a minor event by comparison to military developments.

How will the Media reconcile their support for the Palestinians as ISIL moves in.
Israel must be concerned with what is happening, very uncertain next few years in the ME.

Iran is more of a threat than ISIS. If Israel surgically strikes Irans Nuclear Bomb making site, it'll be all on. Isis is just a distraction.

Jason in 6BC the Greek farmers were "so bad at finance" was caused by the government fees and levies. Basically the public sector destroyed the private business reducing them to slavery just to feed their families. This was because government "costs" kept increasing and they used force to get what they wanted via the law.
Just like the rest of the world is doing now.

If you are stupid enough to greedily loan money to people, business', or countries that probably don't have the ability to ever repay you then it's your problem. Go GREECE! Tell the creditors to get stuffed. Print your own money, get out of the Euro and the European union and at least create a future for your children.

For Greece very much the time of change , austerity has only deepened the problems for Greek people , i agree go Greece leave the Euro create a Bradbury dracma and free yourselves from the grips of bankers .

Banks will try to twist you any which way they can , some of their own medicine might be a good thing .

"Philosopher George Santayana’s quote about those who ignore history are doomed to repeat it is somewhat of cliché, but only because it is damned applicable."

Indeed, "this time it will be different" is just ignoring history. Don't get smug AKL - How is the situation in AKL going to turn out much different than Greece?

One assumes that by "6BC" Jason means "600BC". In 6BC Greece was just a province of the Roman Empire under Augustus. As such it was governed by a provincial governor whose job it was to collect taxes, keep the peace and make out like a bandit personally.

Also when he says Greece he actually means Athens. What we now call Greece was then a patchwork of hundreds of micro-states of which Athens/Attica was only one. And they hardly invented finance given that, in almost everything they were copycatting the nations of what is now the Middle East: Egypt, Persia, Phoenicia, Lydia, the Mesopotamian cities.

It's hard to take the word of analysts who are out by two orders of magnitude and know absolutely nothing about history.

Plenty of people have their views on Greece much attained from the global right wing press, on regular visits to Greece and the Greek islands you find lovely hard working people .

The Greek people are suffering and the bottom line is you can't get what people have not got, with 50% youth unemployment and 500 ,000 already made exit , there are very much reduced numbers of tax payers .

The story is also not just about money
It's about ideology
Want the Neo-liberals to win? Then I suggest you cheer on Merkel.
.
I don't want to live in a world where pensioners and those on minimum wage are the ones who are told they have to do with less (especially not by the likes of Lagarde, whose salary could support 10 pensioners for a year), while the ultra rich keep getting richer.
.
The IMF has made EUR2.5 billion profit from Greece since 2010.